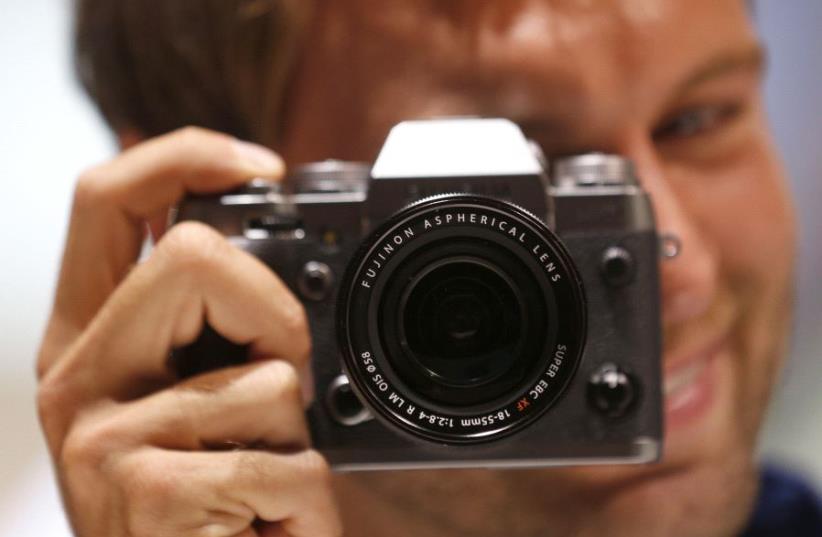 A model poses with a camera
(photo credit: REUTERS/INA FASSBENDER)
Advertisement
New software developed by researchers at Ben-Gurion University of the Negev makes it possible for standard cameras to capture hyperspectral images and video using a faster and more cost-efficient approach than what is commercially available today.The game-changing software captures the spectral signature of every pixel in a single image – a significant improvement over the current spectrometric technology, which can only measure one point or line at a time. It can also create hyperspectral videos, instantly collecting hyperspectral information on non-static objects. The software can be installed in existing cameras, including smartphone cameras, turning them into extremely low-cost and fast-working hyperspectral cameras.Hyperspectral imaging collects and processes information from across the electromagnetic spectrum.The aim is to obtain the spectrum for each pixel in the image of a scene, with the purpose of finding objects, identifying materials, or detecting processes. Existing hyperspectral cameras are used to detect specific materials and identify the qualities of those materials, such as an analysis of the earth’s composition, its vegetation or the existence of oil or impurities in water. Yet these cameras are expensive and cumbersome to use and photographing a frame can take up to a minute.“Current hyperspectral technology seeks to capture the entire electromagnetic spectrum,” says Prof. Ohad Ben-Shahar, founding director of the interdisciplinary computational vision laboratory and head of BGU’s computer science department. “Our technology, however, shows that wavelengths in nature cover only a small subset of all possible spectra (since the spectrum of the sun is relatively stable and the number of substances in the world is finite). Using computational research, we were able to reconstruct hyperspectral imaging from the regular RGB (red-green-blue) color model used in regular cameras. In most cases, this provides extremely good reconstruction.”The global hyperspectral imaging systems market is projected to reach $12.71 billion by 2021, according to a report published in January 2017.“Our researchers are world leaders in the fields of computational vision and electro-optical engineering, and a great part of this research can be utilized for commercial purposes,” said Netta Cohen, CEO of BGN Technologies, the technology transfer company of BGU.TOUCHING HELPS BUILD THE SEXUAL BRAIN Are hormones or sexual experience crucial for the onset of puberty? It seems that when rats are touched on their genitals, their brain changes and puberty accelerates. In a new study published recently in the open-access journal PLOS Biology, German researchers led by Constanze Lenschow and Michael Brecht report that sexual touch might have a bigger influence on puberty than previously thought.It has been known for some time that social cues can either accelerate or delay puberty in mammals, but it hasn’t been clear which signals are crucial, nor how they affect the body and brain, and in particular the possible reorganization of the brain.The researchers first observed that the neural representation of the genitals in the cerebral cortex expands during puberty. The study confirms what was expected – that sexual hormones accelerate puberty and the growth of the so-called “genital cortex.” However, what’s new is that they find that sexual touch also contributes substantially to the acceleration of puberty.During their study, the scientists first put young female rats together with male rats and found that the genital cortex expanded as a result. This didn’t happen when the females were housed with other females, or if the males were separated from them by wire mesh, thereby preventing direct contact. However, they found that the same acceleration of cortical expansion could be observed when the rats’ genitals were touched artificially using a lubricated brush.Lenschow explained that “the effects of sexual touch on puberty and the genital cortex are remarkable since you wouldn’t expect this area of the brain to expand at this stage of development.” Hence, the expansion of the genital cortex is triggered not only by hormones but also by sexual touch.“The representation of the body changes in the cerebral cortex,” added Brecht, “and in particular, the genital cortex doubles in size. Our results help to understand why the perception of our body changes so much during puberty.”Thus, changes of the body and the concurrent changes in the brain during puberty are not merely a matter of hormones – they are also co-determined by sexual experience.A FLYING BIRTHDAY PRESENT A new species of damselfly from the Cretaceous period has been named after the great 91-year-old British naturalist and TV host Sir David Attenborough.The discovery, published in the Journal of Systematic Palaeontology, was made in the Hukawng Valley of Kachin Province in Myanmar. The fossil was found in a piece of mid-Cretaceous Burmese amber. The full scientific name for the new species, belonging to a group more commonly known as shadowdamsels, is Mesosticta davidattenboroughi. Researchers decided to name the new species after Attenborough because of his long-standing appreciation of dragonflies and to celebrate his birthday.Co-author Prof. Edmund Jarzembowski said, “Dragonflies in amber are extremely rare and the recent discoveries by my Chinese colleagues are a new window on the past. It is tradition in taxonomy (the naming of a new species) to contact the person concerned. Sir David was delighted because he is not only interested in the story of amber, but also a president of the British Dragonfly Society.”Mesosticta davidattenboroughi joins a long list of animals that have been named after Attenborough, including a weevil and fossil species of a plesiosaur and a fish.The fossil itself is extremely well preserved as it is encased in yellow transparent amber and includes a complete set of wings. With the aid of photo technology, researchers were able to digitally enhance and build a clear three-dimensional picture of the new species, showing that it differed from previously described fossils, notably in the shorter wing length.
Sign up for the Health & Wellness newsletter >>