No Smoking Day: Save yourself, your family and your pets

ICA director-general Miri Ziv said, “We must change the social norm regarding smoking in Israel and raise a generation of citizens free from tobacco and nicotine addiction.” 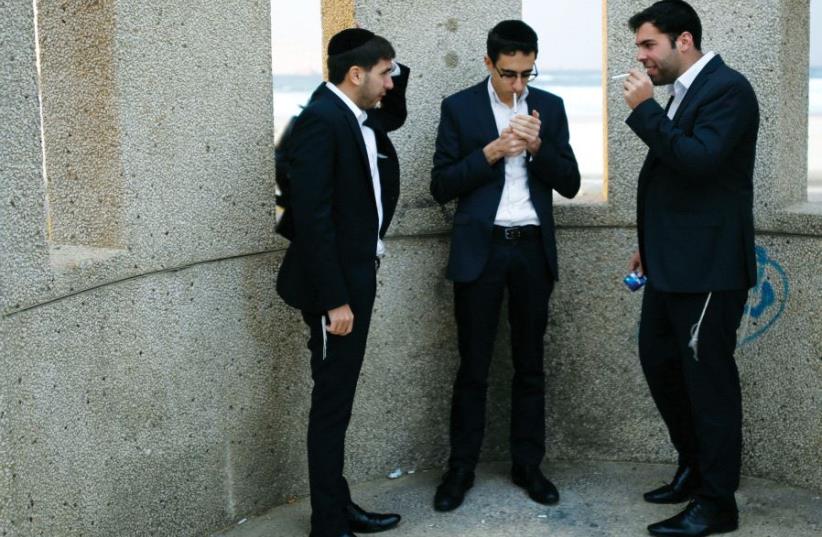 Utra-orthodox men smoke cigarettes near the beach in Ashdod
(photo credit: REUTERS)
Advertisement
If you smoke and don’t care about your own health, at least think about the well-being of your family and even your pet dog or cat, says the Israel Cancer Association (ICA) for World No Smoking Day, marked worldwide on May 31.Every day, 22 Israelis and 19,000 people around the world die from smoking-related illnesses. The smoking epidemic kills more than seven million people each year, including nearly 900,000 non-smokers who die from passive (secondhand) smoke without even lighting up. Of the more than 8,000 Israelis who die of tobacco-related causes each year, a tenth of them are passive smokers.Scientific studies have shown that carcinogens are absorbed in the bodies of passive smokers, similar to those absorbed by active smokers, which cause cardiovascular disease, respiratory diseases and cancer of the lungs, pharynx, throat, colon, bladder, kidney, cervix and pancreas. In infants, secondhand smoke may cause sudden death, and pregnant women exposed to smoke have an increased risk of having low-birth-weight babies.ICA director-general Miri Ziv said: “We must change the social norm regarding smoking in Israel and raise a generation of citizens free from tobacco and nicotine addiction.”She noted on Tuesday that the latest State Comptroller Report on the Health Ministry found that it and other government bodies were seriously negligent in fighting tobacco addiction. In addition, the ministry has failed to implement the World Health Organization’s Framework Tobacco Control Convention that Israel ratified in 2005.Deputy Health Minister Ya’acov Litzman continues to oppose putting images of diseased, nicotine- stained lungs and teeth on cigarette packets or requiring plain, generic packets instead of eye-catching graphics.A fascinating study at the Taiwan University Veterinary Hospital in Taipei recently found a significant link between tobacco smoking and respiratory diseases in dogs and cats. Among the pets’ resultant symptoms were shortness of breath, coughing, heavy breathing and snoring.“Legislation for restricting smoking in Israel and around the world has been proven to save lives, but much work is still ahead. The government must equalize taxes on all types of tobacco, expand and enforce the ‘No Smoking in Public Places Law’ and prohibit all tobacco advertising,” Ziv said.As the Health Ministry rarely runs public service announcements against smoking, the ICA has decided to nostalgically present anti-smoking messages from the 1970s on its Facebook page; these include the plea by actor Yul Brenner not to smoke as he himself was terminally ill with lung cancer.Meanwhile, after repeated pleas by the ICA to the producers of the “Big Brother” TV show, in which smoking has very frequently been shown in and around the house, action is finally being taken. The ICA noted that the amount of smoking on the Reshet show has been significantly reduced so as not to serve as a harmful role model to young people who watch the popular show.