The arachnids – members of the spider family – can strike anywhere, including in highly developed neighborhoods. 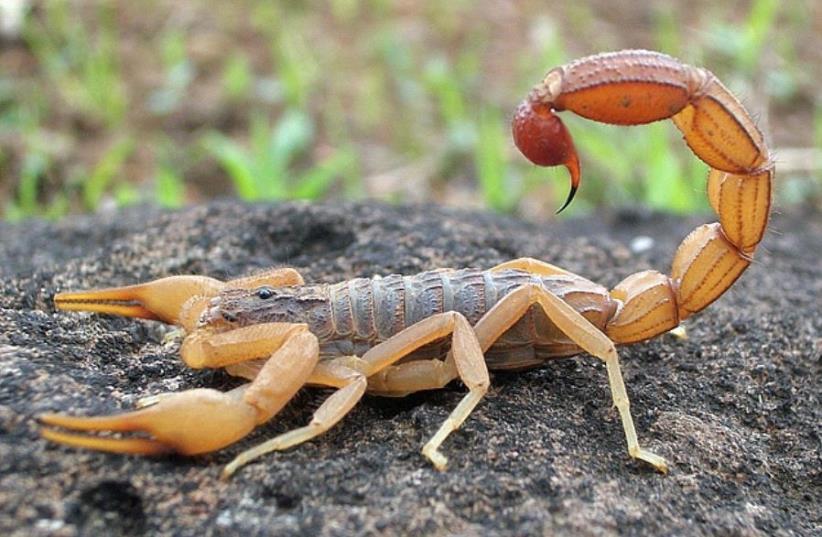 Hottentotta tamulus, the Indian red scorpion from Mangaon, Maharashtra, India
(photo credit: SHANTANU KUVESKAR VIA WIKIMEDIA COMMONS/CC BY-SA 4.0)
Advertisement
The stinging by venomous scorpions of three children within two days is a stark reminder that this is the season for such dangers.The victims, two in serious and one in moderate condition, are Beduin residents of the Negev being treated at Beersheba’s Soroka-University Medical Center.But the arachnids, members of the spider family, can strike anywhere, including in highly developed neighborhoods.The first child, a two-yearold girl, was rushed to Soroka in serious condition. The second, a boy, was brought to the Magen David Adom emergency care center in Arad, given initial treatment and then taken to Soroka. The third, a five-yearold boy, was also hospitalized.Tomer Mashli, head of the Sde Boker Field School Reptile Center, told The Jerusalem Post that of the more than 1,000 types of scorpions in the world, 17 live in Israel and just two of those are very dangerous. The greatest threat comes from the “deathstalker,” Leiurus quinquestriatus, also known as the Israeli or Palestine yellow scorpion.Scorpions are cold-blooded creatures who hibernate in winter and wake up – hungry and full of venom – in the spring, to move about in hot temperatures.They can be found under rocks, in crevices and tall grass or even in empty shoes, said Mashli. The insects eat spiders and other small creatures and need to drink regularly.The venom of the scorpion affects the nervous system, heart and blood vessels. The sting itself is very painful and when a sufficient amount of venom is injected, its effect on the body is quickly noticeable.Reactions to the venom include restlessness, muscle cramps, lots of sweating and tearing of the eyes, increased pulse rate and damage to the heart that can lead to heart failure.In the event of a venomous scorpion sting, call for an ambulance, lie down and remain perfectly still, as movement causes the venom to spread rapidly in the bloodstream. Putting ice on the sting is advisable to slow movement of the venom. The affected limb should be immobilized and kept lower than the heart. At the hospital, venom antidotes will be given, and doctors will try to stabilize the patient. Usually, with such treatment, the sting is not fatal, said Mashli.Prevention is always best. Be very careful when approaching places where venomous creatures like scorpions tend to hide, such as underbrush, inside corners of buildings and piles of wood or stones. Avoid putting your hands in these places. If you need to move a pile of wood or stones, use a rod or pole to shift the materials before picking them up. When camping, take great care when you wake up. Check the tent and sleeping bags and shake clothes and shoes – outside the tent – before putting them on.