Bats, being social animals. must be aware of their fellows when they fly. 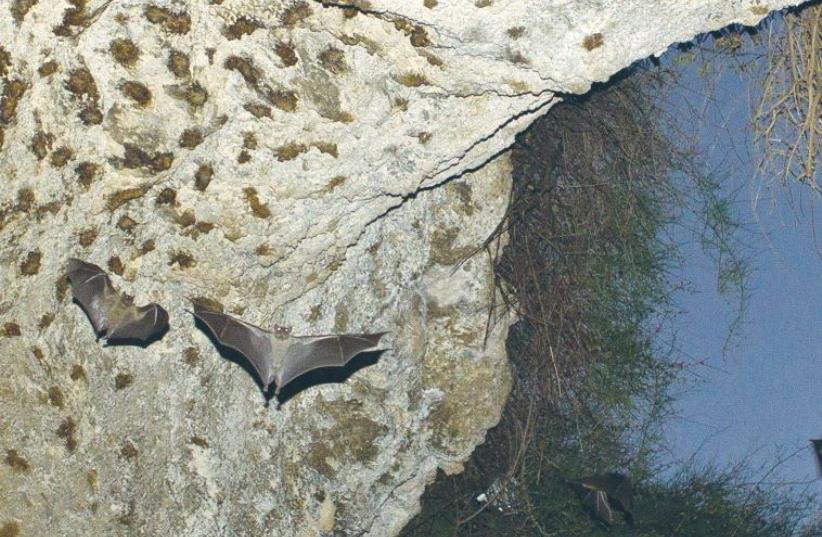 BATS FLY in a cave near Tel Aviv in July 2012. Israeli scientists are researching how the winged mammals communicate to help understand the evolution of human language and possibly pave the way for improved radar and robotic technologies.
(photo credit: NIR ELIAS / REUTERS)
Advertisement
Weizmann Institute of Science researchers have identified for the first time “social-place neurons” in the brain that respond to the locations of others in the spatial environment.Whether we’re playing a team sport or just strolling with our family through the park, we’re continually aware of the positions of those around us – and where each is heading. Scientists have, in recent decades, pinpointed neurons called “place cells” that encode our own location in the environment, but it has always been a mystery how our brains represent the positions of others.Now, Prof. Nachum Ulanovsky of the Rehovot institute’s neurobiology department and colleagues doing research on Egyptian fruit bats have published their discovery in the prestigious journal Science. They reveal a sub-population of neurons that encode the specific location of other bats that are flying nearby.“Bats, like humans, are social animals; they are supreme navigators and they are very aware of other bats in their spacial environment,” said Ulanovsky, who led the study. Ulanovsky’s research focuses on the brain’s place cells in the hippocampus. These cells, which help us and other mammals form the internal cognitive maps that we use to navigate our environment, earned their discoverers a Nobel Prize in 2014.More recent research has suggested that the hippocampus may also play a role in social interaction. So Ulanovsky and his group, including Dr. David Omer, Dr. Liora Las and research student Shir Maimon, wanted to know how these two functions, location and social interaction, might intersect in this part of the brain.Ulanovsky and his team devised an experimental learning situation for bats in their unique “bat lab,” in which two of the flying mammals – a “teacher” and a “student” – were paired. The student at first observed how the teacher flew randomly toward one of the “fruit stands” placed in the lab and back to his perch. After about 13 seconds, on average, the student tracked the teacher’s route to the food.To uncover what was taking place within the bats’ brains, each bat was equipped with a miniature wireless recording device called a neural logger and tiny electrodes that enabled the researchers to record the activity of nearly 400 brain cells in the forward region of the hippocampus. The tiny electrodes and recording device, which have been developed by Ulanovsky and his group over the years, do not interfere with the bats’ activities in any way.“The most challenging part of the experiments was to prevent the two bats from flying off together, as we needed one to stay put so we could differentiate the self- from the other-place cells,” he recalled. Ulanovsky. “The trick was to identify the alpha males of the group and make them the teachers – this then made the students ‘pay respect’ and not fly out together with the teachers.”The results of these experiments support the idea that our brains create a cognitive map not just of our location in the environment, but one that includes social mapping. When the student bats navigated the lab space on their own, their place cells were naturally active. But when they stayed still and observed the teacher bats, around 18% of their hippocampus cells represented the position of the other bat – that is, they became active when the teacher flew through a specific portion of space.Further analysis suggested that around half of these cells were acting alternately as regular place cells or as social place cells that located the other bat, while others were responsive only to the other bat’s location.The same issue of Science published a related study on rats, carried out at RIKEN, Japan’s largest comprehensive research institution renowned for high-quality research. Weizmann said their studies together open the door to new questions on these social place cells, such as how the cells act in “social settings” with many participants and whether their activity depends on the relatedness of the other animal or their sex.