... and what they mean for Israel and the Jewish community. 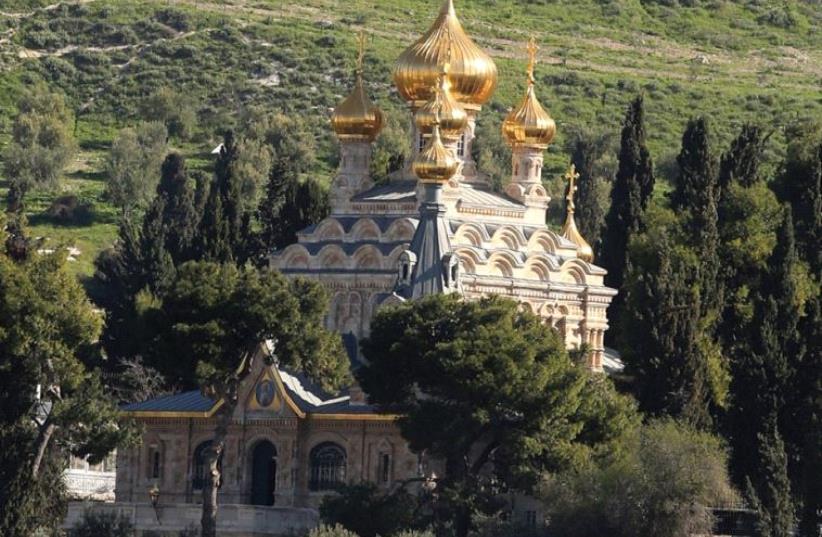 The Church of Mary Magdalene in the Old City
(photo credit: MARC ISRAEL SELLEM)
Advertisement
It’s a story that Jerusalem tour guides share with pilgrims who travel thousands of miles to see one of the holiest sites in Christianity.Three denominations – the Armenian Orthodox Church, Greek Orthodox Church, and Roman Catholic Church all claim to be the legitimate caretakers of the Church of the Holy Sepulchre, the location where tradition states Jesus was crucified, buried and resurrected. An old ladder leans against the building’s walls as a testament to the fractured stalemate that dictates each church’s interaction with the others – no one can ever come to an agreement, not even on how to move a seemingly insignificant ladder. As for the keys to the church’s door? They’re safeguarded by a Muslim family, and have been for generations.This is the state of affairs among several of the thousands of denominations that make up Christendom as we know it today. Recent shifts in doctrine and theology toward Israel and the Jewish community have brought about a dialogue centered on why these denominations exist and how their differences translate into whether they support the existence of the Jewish State.“You don’t really have Catholics that are motivated to stand with Israel. I’m happy about Nostra Aetate, but all they’re really saying that Jews today aren’t responsible for killing Jesus,” says lecturer and biblical scholar Dr. Brad Young. “But recently we have Dominus Iesus, which is really saying you’re either in the house of Jesus or outside of the house of Jesus and probably most of us from a non-Catholic background are going to be outside.”Although Catholicism accounts for more than 900 million of the 2.2 billion Christians worldwide, a significant minority distinguishes itself in regard to the Jewish community.Evangelicals, who account for about 28 percent of Christian believers, tend to be ardent supporters of Israel. Young says that this distinction is generally overlooked.“Look at this tremendous change in Christianity today and how little is understood in the Israeli community, the Jewish community, of the differences between some of the Christian groups,” says Young. “Every Christian is kind of like the Catholic.”In an effort to clarify theological differences and increase interaction between Christians and Jews, a series of lectures and Bible studies hosted by the Bible Lands Museum and the Center for Jewish-Christian Understanding and Cooperation aims to answer some of the questions posited by both faith groups. CJCUC director David Nekrutman explains that the nature of the relationship between Christians and Jews has reached a historic point, emphasizing the importance of mutual understanding for what each faith requires of its believers.“Unity does not mean sameness. I’m not expecting the Christian to become an Orthodox Jew and I hope the Christian can still live in mystery as stated at the end of Romans 11, even according to Paul, that this is all a mystery,” says Nekrutman.“Salvation will be worked out by God, but in the interim we have a mission to repair a broken world.”The common ground that both Young and Nekrutman describe as connecting the two Abrahamic groups is heavily rooted in the biblical religious text. Both faiths hold the Tanach, which Christians call the Old Testament, in high regard and as a divine blueprint for how to live a godly life. This biblical connection is what drives most evangelical Christians in their support of Israel, according to Young. Add the establishment of the country in 1948 alongside the leadership of then-president Harry Truman, and you have a recipe for a major shift in Christian attitudes towards the Jewish community.“When we talk about the evangelical churches you’re talking about theology that’s more based on the scripture, really emphasizing a personal relationship,” says Young.“Most people would think that you would automatically have this connection with maybe the Conservative Jewish community, or the Reform Jewish community, but really it’s the Orthodox Jewish community.”The connection between Orthodox Jews and Evangelical Christians in the context of the proliferation of the pro-Israel movement is unprecedented, adds Nekrutman.The CJCUC is a response to this phenomenon, and seeks to take the Christian-Jewish relationship beyond sympathizing with the Jewish state.“There are individual Orthodox rabbis who have been involved in Jewish-Christian relations, but there has never been an institutional or denominational move to reciprocate back to those dedicated, committed Christians,” says Nekrutman. The reasoning behind this hesitation stems from the negative history between the church and the synagogue, something he says the raw memory of which is still present today.“We are trying to educate… the Israeli-Jewish community.Most Jews have a medieval Catholic understanding of Christianity. They don’t really comprehend some of the differences between Protestant movements, and definitely don’t understand the spirit-filled world where most of the Christian support for Israel grassroots-wise is happening.”Through the lecture series, the CJUC hopes that a greater sense of camaraderie and mutual understanding will develop; Young participated as a speaker a two weeks ago.Topics range from Christian denominations to the meaning of family within Judaism. Ultimately, Young and Nekrutman feel that a belief in the God of Abraham, Isaac and Jacob has the potential overcome any obstacles along the way.“You’ve got a lot of differences, but there’s something there with that faith in God,” Young says.