Wheat is almost inescapable, as those trying to adopt a gluten-free diet will testify. 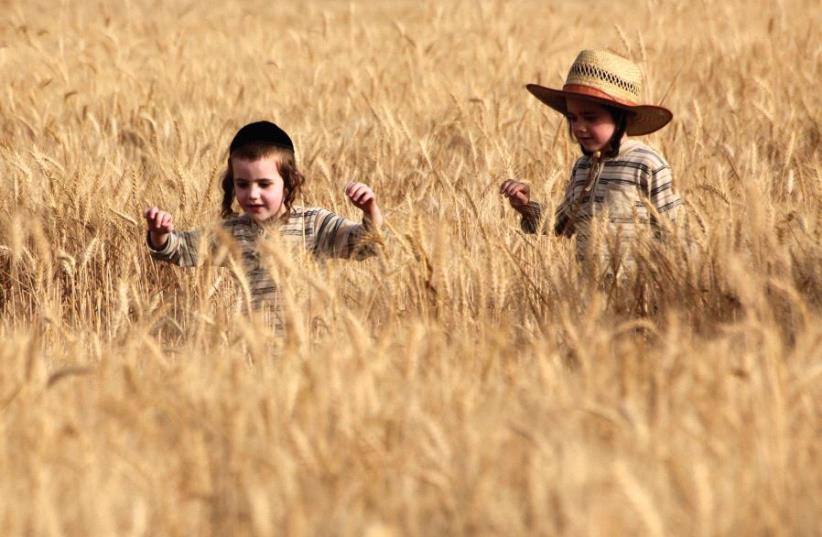 Kids in a wheat field
(photo credit: MARC ISRAEL SELLEM)
Advertisement
Since the dawn of time, wheat has been the staple food of mankind, ground into ﬂour and baked into bread – the staff of life. Unlike its cousins in the family of wild grasses – spelt, rye and barley – wheat (Triticum) has evolved over the eons, undergoing a process of natural selection, domestication and more recently, genetic engineering to improve its yield and quality.In biblical times, the strains of wheat most commonly used were emmer and einkorn wheat. These strains have a thick outer skin and require a laborious process of tempering (soaking) of the grains to remove it, accessing the inner portion of the grain, the endosperm, which is ground into flour. By the time of the Roman Empire, most of the world had switched to using hard wheat (Triticum durum) to make bread, and now, almost 2,000 years later, civilization has again switched to a different strain, soft wheat (Triticum aestivum), to make our daily staple.The reason wheat has remained the predominant grain over the ages can be found in its chemical composition. Of all the grains in nature, wheat has the highest concentration of gluten proteins, resulting in dough that is easy to work with and in bread that rises well and retains its shape.GROWING WHEAT has always been a challenging endeavor. Aside from the many pests that infest wheat, invading weeds crowd out much of the crop and reduce yield. To control these problems, mankind resorted to the use of pesticides.Some 4,500 years ago, the Sumerians were already using a sulfur compound and toxic plants to kill pests. The pesticide industry only really took off after the 15th century with the use of poisonous chemicals like arsenic and lead. These were followed by extracts from plants such as tobacco, chrysanthemums, and certain vegetables. In the 20th century, pyrethrin insecticides and nitrogen and carboxylic acid-based herbicides like glyphosate, became all the rage.Most recently, genetic engineering and hybridization of wheat crops focus on improving resistance to infestation and making wheat immune to herbicides such as glyphosate. This enables a farmer to spray his field with the herbicide, killing all the weeds and leaving the wheat intact. In addition, genetic engineering increases the concentration of gluten proteins in the grain, thus improving performance of the flour in baking. Genetic engineering offers the promise of increased yields in a world of burgeoning population and dwindling natural resources.Due to these recent developments, it is almost impossible to find wheat today that is not genetically engineered or hybridized. In fact, unlike centuries ago, when wheat seeds were public domain and farmers kept back some of the crop to reseed their next crop, today wheat grains are patented with a unique, genetically engineered signature in the grain’s DNA and it is illegal to plant that wheat unless it is purchased legally from the company that holds the patent. Catching violators is easy, by examining the wheat in the laboratory for the company’s genetic signature. Reseeding of wheat is almost unheard of today as the attractions and benefits of the genetically engineered or hybridized wheat diminish with each successive generation of replanting and farmers prefer to purchase new seeds for each planting, rather than reseeding.Regulation and monitoring of pesticides and genetically engineered crops is in the hands of government bodies such as the FDA, that determine whether the resultant food is fit for human consumption and not harmful to health. They are the watchdog of the food industry and one can only hope they are doing their job. There is a lot of controversy worldwide regarding the use of pesticides and genetically engineered crops, with the antagonists indignant about the fact that we are being used as human guinea pigs for new agro-technology. The expanding health-food industry has grown out of this controversy and advocates use of organic and non-GMO crops (without pesticides and not genetically engineered). The jury is not yet in on this issue and only time will tell who is right.Meanwhile for us consumers, wheat is almost inescapable, as those trying to adopt a gluten-free diet will testify. A short perusal of the celiac’s no-no list gives some indication of how many foods that you would never imagine to contain wheat, actually do.Wheat bread has lost much of its former glory and is no longer regarded by many nutritionists to be a healthy food, perhaps because of all the shenanigans we have been getting up to with it in the last century or two, although it undoubtedly remains mankind’s staple, at least for the time being.

The writer, a master baker originally from Johannesburg, South Africa, lives in Karnei Shomron with his wife Sheryl and four children. He is CEO of the Saidel Artisan Baking Institute (www.saidels.com), that specializes in training and education in the field of organic, healthy, artisan baking and the inventor of Rambam Bread. He also lectures and works as a consultant in the fields of cereal chemistry, health, nutrition and authentic Jewish bread.