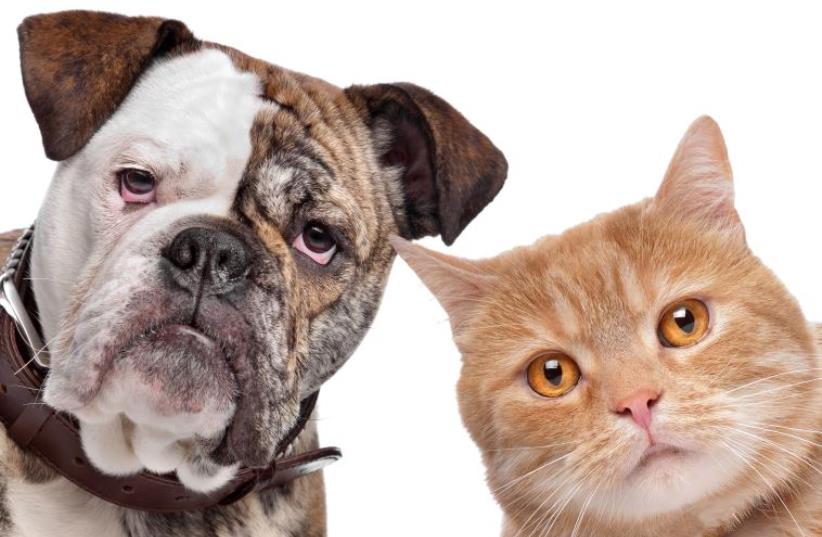 A dog and a cat
(photo credit: RUTH YUDEKOVITZ)
Advertisement
The subject is cats and dogs. My cat and other people’s dogs. More specifically, Israeli cats and dogs. Plus a conversation with one of the more unusual men it has been my pleasure to invent.First, my cat. After an extended walkabout and several weeks of settling in, STC (Samantha The Cat) now glories in her new life as Queen of the Upper Mirpeset [balcony].She comes and goes as she pleases. A quadruple jump from the sidewalk to the deck: propane tank, air conditioner, street sign, then up onto the patio. She reverses the process to get down, except when gravity provides an unexpected assist.
Read More...
We took Samantha in long ago. We could have adopted dozens. Why so many feral cats? One explanation is that a hundred years ago, Jewish pioneers imported cats to deal with a rat problem, leaving us with a cat problem. I prefer to think of them as descendants of the Ten Lost Tribes, awaiting the accession of a center-left coalition before revealing themselves.The feline heirs of the Northern Kingdom, still hoping for a benign and tolerant government in Jerusalem with whom to negotiate.Don’t expect the cats to morph back any time soon.Now to the dogs. Israeli dogs.They bark. All the time. No Israeli dog ever lets another dog finish a bark. The dog who barks loudest wins the argument, whether contending with fellow canines or humans. And lots of us are thoroughly sick of the noise.I live in Karmiel, which is blessed with an excellent municipal government.Recently, they posted a sign on our walkway, depicting a howling dog with the international red “Forbidden” magic symbol over it, lots of Hebrew underneath, then something that looks like a city ordinance number.Great, thought I.But how to enforce whatever the ordinance might be? Confiscate and euthanize the dogs? Awfully extreme. How about just fining the owners? Yes, absolutely.But how exactly do you identify the perps and their humans? I thought about calling city hall to inquire, but I’ve dealt with them enough of late. Seems that when you move and get a new ID card, the Interior Ministry notifies everybody. I hadn’t yet told them we’d moved, so their computer decided we now lived at two addresses and we were evading arnona (municipal tax) on one. So they froze unto themselves a couple thousand shekels in our bank account.Fortunately, a very nice woman at the office straightened it out, but it left me wondering whether Karmiel had the will and the way to enforce its verbose antibark enactments.Curiosity may have killed the cat, but it motivates me. I Googled “barking dogs/ municipal governments/fines/enforcement/legal appeals procedures.” And there, number 11,504 of 7.2 gadzillion entries, I discovered Dr. Hitraot Finebark, DVM, native-born Israeli now living in Apocrypha, New York, and inventor of FACTS: The Finebark Automated Canine Totalization System.According to Dr. Finebark, whom I interviewed by phone, FACTS is basically a computerized dog collar. You put it on the dog. It counts the barks, then transmits the daily total by Wi-Fi to the municipality, which then fines the owner per bark.Sad to relate, sales so far have been slow. Nor has his system for dealing with dogs that poop on sidewalks done all that well. He calls this variant of his basic idea FACTOIDS: The Finebark Automated Canine Totalization Offensive Item Detection System.This consists of a computerized micro-camera implanted under the dog’s tail, plus a GPS transceiver accurate enough to have the locations of the offenses stand up in Doggie Court: another new Finebark idea which, he feels, every local government should implement when they purchase his systems.After explaining his inventions, we got to chatting. I asked him why he’d left Israel.“Professional opportunities. Israel wasn’t going to the dogs fast enough, although that may be changing. And I think they might be willing to consider yet another of my forward-looking enterprises.”Veterinary psychiatry. Treating people through their pets.The concept is simple. You explain to the dog or cat what’s going on in the human world. At first, they don’t believe you. But after a while, they accept. Then you empower them to get their humans to change things by barking until they do.Cats don’t bark.“True enough,” responded he. “But you can teach them to claw the furniture or ruin the knitting.”This gave me pause. Cats have no social conscience. As for dogs – wouldn’t getting them to bark and getting them to stop barking be mutually exclusive and confuse them thoroughly? And how could humans respond to therapy if they’re also being forced to pay the city every time the pooch sounds off? Dr. Finebark laughed.“You see? I’m still an Israeli at heart.”The writer favors an alternative approach: Draft the beasties.Let the Army straighten them out. After all, that’s how Israeli parents handle their barking children.