These were the lucky ones, the survivors. They were free and realizing the unimaginable: going to Eretz Yisrael. 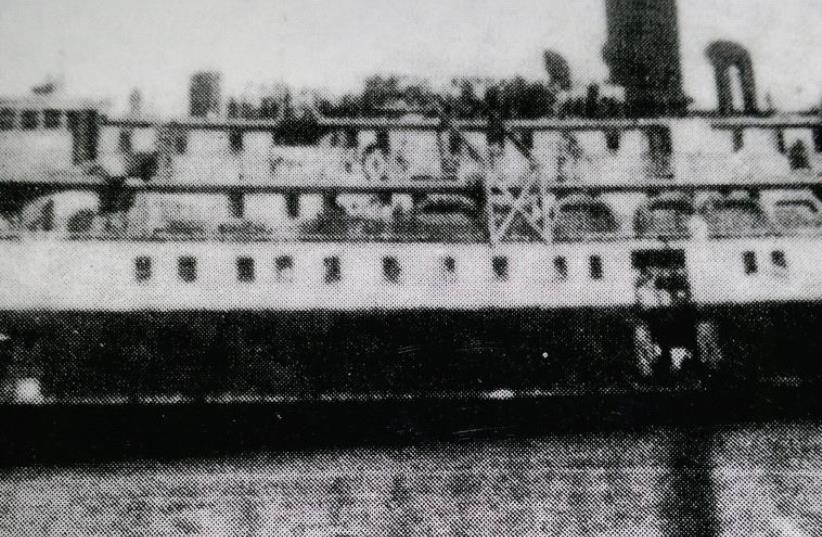 A matter of time before the British would attack: The ‘Exodus 1947'
(photo credit: Courtesy)
Advertisement
David Ariel, formerly Leibowitz, an Ashkelon resident for the last 54 years, was a passenger on the Exodus 1947, carrying Holocaust survivors to Palestine. What follows is just a drop in the deep bucket of his amazing life.David Leibowitz was born in Carpatorus, Czechoslovakia, the oldest of three siblings. His father was a successful tailor and his mother took care of the family and the home. Life was good until the Czechs left and the Hungarians stormed the town after aligning with Germany. Things became perilous, but there was no risk to life until March 1944, when the Germans came marching into the city. At that point, life became a living hell.

David, 13, and his family were exiled to a ghetto until the day after Passover when they were thrown into cattle cars with a hundred others for a grueling three-day journey. Before getting off the train, his mother whispered to him to stand tall and always say that he was 16.These were her last words to him, and her advice later saved his life.Immediately after arriving at Auschwitz, the “selection” process began and David lost sight of his mother and siblings forever. He managed to stay with his father for two or three days before they too were separated, David being sent to Austria to the Mauthausen concentration camp. During the “selection” there, he found himself on the left, standing with the children. He heard his mom say, “Dudi, do not go with the children!” David jumped to the adult side and followed that group into the camp. There he was given his new name: No. 68511. (In 1993, on a visit to the camp, David learned that those children who had been on the left had been sent to the gas chambers. His beloved mother had saved his life.) He began a journey that movies are made of. Today at age 86, speaking in a strong voice that faltered at times when describing some incredibly harrowing details, David shared his life with amazing acuity. Beatings, working dawn to dusk building tunnels – this was now his life at the Melk work camp, where one subsisted on meager food rations, fought disease and battled every day to survive. The 10 months he spent there were an eternity and only the strong survived. Going to the infirmary was not an option, since whoever was taken there never came out. 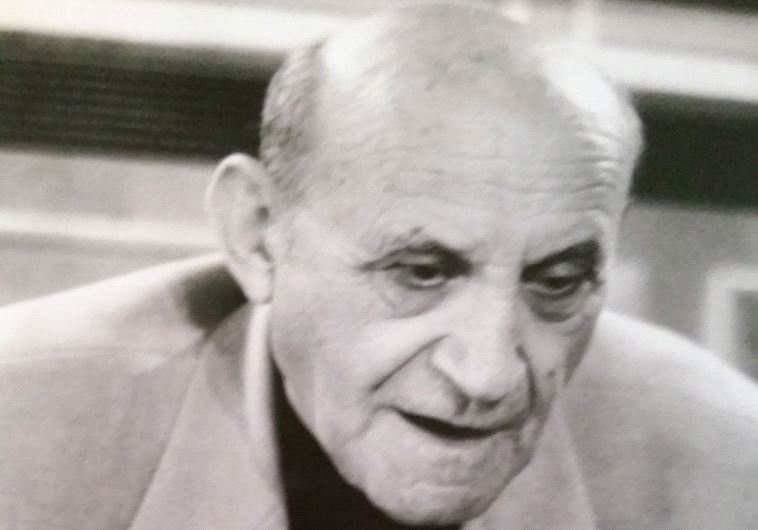 In March 1945, David was moved to the Ebensee work camp; conditions there made even Melk look tolerable by comparison. Then on May 6, 1945, the Americans came and freed the camps, immediately setting up field hospitals where David was treated for 10 days.Ironically, only one day earlier, the Germans unsuccessfully attempted to bomb the tunnels, but the prisoners, who knew that the war had ended, refused to go down to the tunnels. They got away with their insurrection only because the SS guards had been replaced by elderly ones.THE AMERICANS interviewed all the freed prisoners. When David was asked where he wanted to relocate, the answer was a no-brainer: Palestine. The Americans laughed, “We can take you anywhere but there. The British won’t agree.”And so David Leibowitz, 14½ years old and all alone, was put on a train by the Americans heading for the Jewish Center in Prague, hoping to find family, or at the very least, a familiar face. Miraculously, he was reunited with his only surviving family member, a cousin named Mendy.David learned that if he wanted to get to Eretz Yisrael, his best chance would be with a Munich youth group called Dror. When he met them in 1946, there were around 200 refugee teens there.They were sent to Palestine in dribs and drabs; David knew he would have to patiently wait his turn. In March 1947, he heard about a religious youth group in Frankfurt that was going to Palestine via France. David Leibowitz made it to the French port of Sete, where he saw the sea for the very first time, and a huge beautiful ship. He was, as he tells it, “the happiest guy in the world.”The ship was the President Warfield, built to comfortably carry about 400 passengers and a crew of 50 – but these were desperate times. When it left Sete, it carried more than 4,500 passengers.The captain was Ike Aronowicz and the commander was Yossi Harel, both Hagana members who, with other volunteers, had stocked the ship with supplies to last for up to two weeks. There were also 17 American navy volunteers, all of whom were Jewish and were ready, more than willing and totally able to get the ship to Palestine, along with a volunteer medical staff and a photographer.The crew made a deal with a French navigator: two million francs to maneuver the ship into open waters. He was paid one million the night before and was to get the rest the following night, but the Frenchman never returned. It was then up to the captain to steer the ship out of port, and after several failed attempts, finally made it. However, from the beginning, the British were on their tail; British warships accompanied them every inch of the way.On the steamer, the passengers and crew communicated to each other in Yiddish since this was the common language of everyone on board. The passengers slept and ate on wooden cots located on three decks and could hardly move from there. They were crammed together like sardines, but nobody cared. These were the lucky ones, the survivors. They were free and realizing the unimaginable: going to Eretz Yisrael.Everyone on board knew that it was a matter of time before the British would attack and they prepared as best they could, having gone through readiness training. They sealed the decks with barbed wire to prevent anyone from getting on board; their weapons were potatoes and empty tin cans. Some people had sharp knives with which to cut any ropes or cables that might be tied to the ship to pull it in. They had rags soaked in water to cover their eyes in case tear gas was fired at them. They were ready for anything. 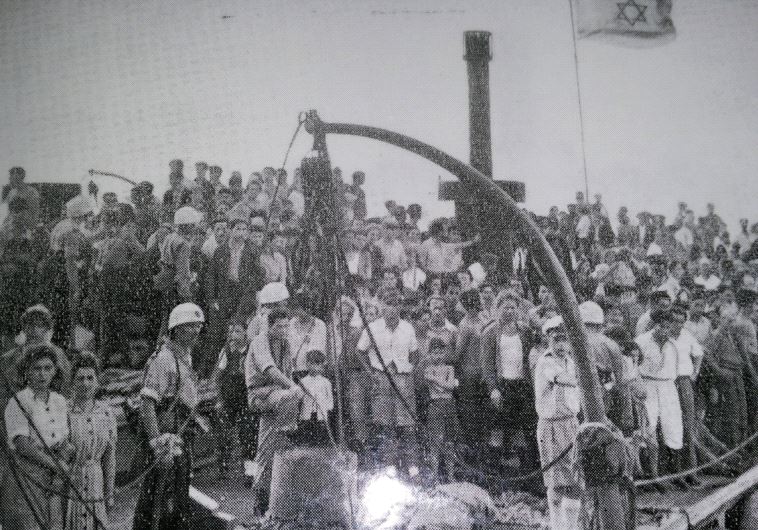 ONWARD THEY sailed, the British destroyers always close by.On the fourth day of their journey, the Hagana crew got an order from headquarters to change the name of the ship to Exodus 1947. To commemorate this event, two giant blue-and-white flags were unfurled and flown proudly from the ships’ masts along with a large sign: Exodus 1947.Knowing the British would try to prevent them from docking, they devised a plan: the ship would get as close to the shore as possible so that the refugees could jump into the water and, equipped with life belts, swim to where volunteers were waiting for them. But it was not to be: in the middle of the night, 80 kilometers from the dark coast, two British destroyers attacked the Exodus on both sides, firing at the upper deck. Thirty British soldiers who had managed to board the ship were quickly taken prisoner and moved to the bottom hold. The British ceased fire, but after a short time resumed their attack, this time aiming at the ship’s lower decks. British soldiers were held at bay, but several gas bombs were hurled onto the ship and many were hurt. At 4 a.m., the third wave came and this time live fire was used. There was fear that the Exodus would sink, and now there were fatalities: three dead and 200 wounded. An order was given to hold fire. The Exodus changed course towards Haifa.Before reaching port, Captain Ike Aronowicz took off his cap and gave it to a young boy saying, “Now you’re the captain,” and with that, he disappeared into a hiding place below from where he could safely escape. The passengers never saw him again, although he lived until 2009.Friday night, upon limping its way into Haifa’s port, the refugees, all on deck, were greeted with Shabbat candles flickering in every window of every house in every direction they looked. “We stood there and stared, and suddenly, as one, broke into ‘Hatikva,’” said David, his voice choking with emotion.The passengers were marched off the ship.The seriously wounded and the bodies of those who had died remained in Haifa. The rest were immediately divided among three British prison ships, 1,500 passengers on each. David was on the Empire Rival. The British told them they would be going to Cyprus to wait their turn to be taken to Palestine, but it was a ruse: they were going back to France.When they arrived at Port de Bouc, French fisherman yelled at them not to disembark, reinforcing the refugees, who had no intention of doing so. Hunkering down for what might be a long stay, schools were set up on board and there was a daily handwritten newspaper, Baderech (“On the Way”) for all on board to read.On the way to France, the British supplied them with leftover war rations which, according to David, were “terrible.” In France they got fresh, healthy food from the Jewish Agency and other volunteer groups.As anticipated, days turned into weeks.France refused to remove the refugees by force. The British decided to send the ships to Gibraltar, and from there to Hamburg.Between the ports of Gibraltar and Hamburg, the refugees on the Empire Rival made a hole in the belly of the ship to hide the bombs they were making. To drown out the noise of the machinery, the passengers screamed, sang and whistled. 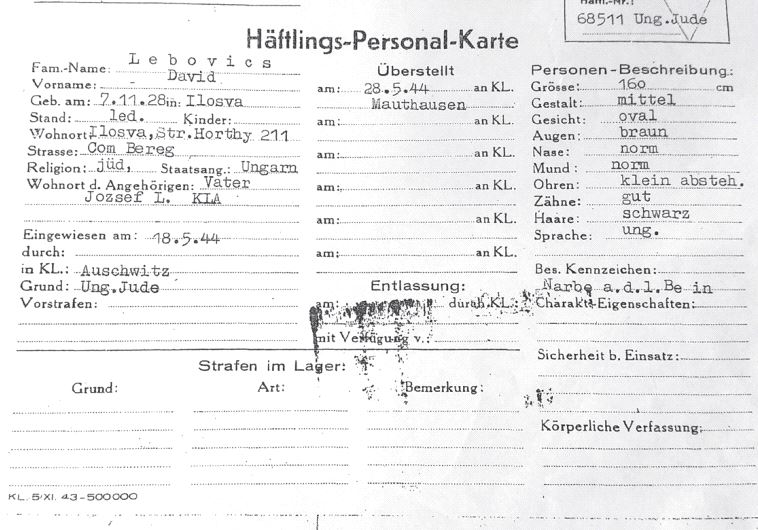 WHEN THEY arrived in Hamburg, the Empire Rival passengers ran off the ship, knowing the bombs could explode at any minute. The suspicious British searched the ship and found the bombs. They were furious and humiliated.They called for an immediate press conference to display the bombs, thus “proving” what despicable people these Jews were. Minutes after the end of the meeting and after everyone had left the area, the bombs exploded.Meanwhile, the refugees had been put on passenger trains guarded by British soldiers.They arrived in a British refugee camp in the area of Hamburg. For David, being in Germany again was sickening, but hearing about the decision to grant statehood to Israel gave David and all the others the strength, will and determination to go on.The Hagana crew that had stayed with the passengers announced that the fledgling country needed fighters to help wage the impending War of Independence. Having to lie about his age, David enlisted in the Hagana, the precursor of the IDF. The Jewish Agency issued fake passports which would be used to enter Israel.David was now a resident of Tel Aviv and lived at 7 Geula Street. He was given explanations about Tel Aviv and life there so that he would sound believable if questioned.David Leibowitz arrived in Israel in April 29, 1948, and immediately enlisted in the Golani Brigade, (where he would serve until 1979, fighting in every war up to and including the 1982 Lebanese War, and was a Lt. Colonel upon his retirement). Almost immediately, he was called to fight in the War of Independence.After a month and a half of fighting, a ceasefire was called and while the unit was in Kfar Tavor, David was surprised to receive a postcard during mail call. “Who could it be?” he wondered, and was even more surprised to read the message: Dear Hebrew Soldier, get a Hebrew name. Signed, David Ben-Gurion.David Leibowitz became David Ariel. He married the woman of his dreams, Hepzi, in 1958 and a new and much happier journey began – but that’s another story.