By no means are Trump and Schumer political bedfellows. But when it comes to Israel policy, these two men are closely aligned – an opportunity for the Israeli government to rebuild diplomatic ties. 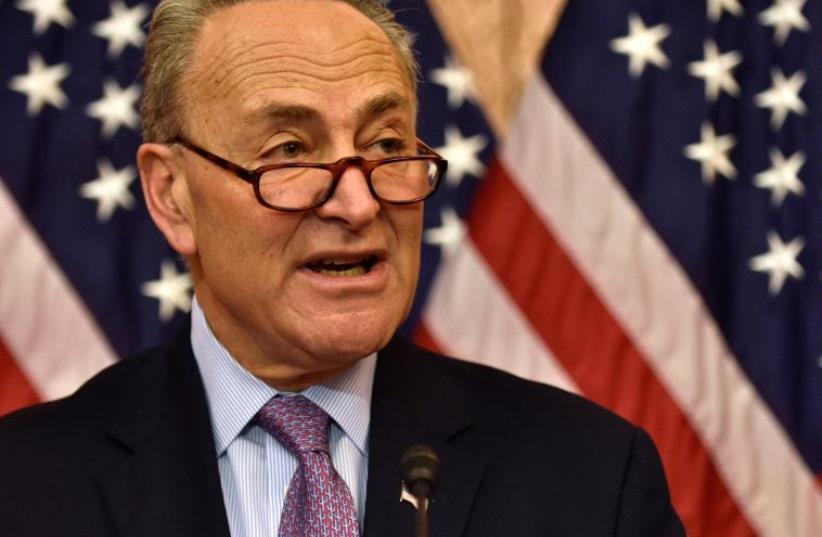 Senator Chuck Schumer
(photo credit: REUTERS)
Advertisement
After 19 years in Congress, Senator Chuck Schumer of New York still surprises Washington. The nation’s highest-ranking Democrat is willing to rattle his party establishment after climbing to its top. And in a tumultuous political environment, he remains his own man, opposing Democrats and dealing with Republicans as he sees fit – as he has throughout his ascent.Risking his leadership position, Schumer opposed his own president’s signature foreign policy achievement in 2015, when Barack Obama brokered a nuclear deal with Iran. More recently, he sat down with Donald Trump to cut deals on the debt ceiling and has encouraged his effort to broker peace between Israelis and Palestinians.Established as a centrist, a leader and an independent thinker on Middle East policy, Schumer, now Senate Minority Leader, has become a reliable bellwether for legislation on foreign aid and sanctions. His support for significant, controversial bills – such as the Taylor Force Act, which would threaten the Palestinian Authority with an aid cut if it continues funding of convicted terrorists and their families in Israel – all but ensures their passage.In an interview with The Jerusalem Post, Schumer expressed hope that passage of the Taylor Force Act in the coming months will send a “clear message” to Palestinian leadership that lawmakers are united against “martyr” payments across the political aisle.“It’s deeply disturbing and abhorrent that the Palestinian Authority provides payments to terrorists and to families of those who have committed acts of terrorism,” Schumer said. “The bill restricts US funds to the West Bank and Gaza that directly benefit the Palestinian Authority until the terrorist payments stop.”Schumer supports the Trump administration’s plan to target international bodies that spend a disproportionate amount of their time and energy on the Israeli-Palestinian file. He is pushing the White House to follow through on Trump’s campaign promise to move the US embassy in Israel from Tel Aviv to Jerusalem – pressure that is typically applied from the political Right. And he co-sponsored a bill that would penalize the boycott, divestment and sanctions movement targeting Israel at the federal level.“I support the Israel Anti-Boycott Act because I strongly oppose the BDS movement and feel that foreign entities and international organizations should not be able to coerce or bully US companies into boycotting an American ally,” Schumer said in the interview. The bill is opposed by several major civil liberties organizations core to the Democratic coalition, including the ACLU.“All Americans have a right to express their political beliefs, and the bill I support does not limit that ability in any way,” he added.By no means are Trump and Schumer political bedfellows. On virtually every domestic issue of import, aside perhaps for the matter of infrastructure, the president and minority leader are worlds apart. But when it comes to Israel policy, these two men are closely aligned – an opportunity for the Israeli government and for those lobbying to rebuild diplomatic ties between the allies.As accommodating as Schumer has been towards Trump’s Israel policy, he has offered particularly harsh criticism of his political alignment with the alt-Right, a loose coalition of ethno-nationalists, white supremacists and neo-Nazis leading a wave of antisemitism in the United States.

GREAT meeting today with the best staff in the history of the world!!! pic.twitter.com/ocE1xhEAac

Schumer has tracked the rising trend and says his concerns piqued after a white power rally in Charlottesville, Virginia, was greeted with a muted response from the president.“It’s been troubling to see the scourge of antisemitism emerge in America in recent months,” Schumer said. “Even before the events in Charlottesville, we saw all-too-frequent reports of graffiti of swastikas on synagogues, Jewish cemeteries vandalized and desecrated, and a wave of bomb threats to Jewish Community Centers and day schools.“We cannot let the darkest and most hateful fringes in our society take hold. We simply cannot stand for this. We must continue to bring the perpetrators of these heinous acts to swift justice and we must continue to speak out and show those who traffic in hatred and bigotry that we will not abide their hate– but rather that the vast majority of Americans who abhor this way of thinking will carry the day.”