Wilders, a eurosceptic, anti-immigration fan of Trump, has dubbed the March 15 parliamentary election the start of a "Patriotic Spring" in Europe. 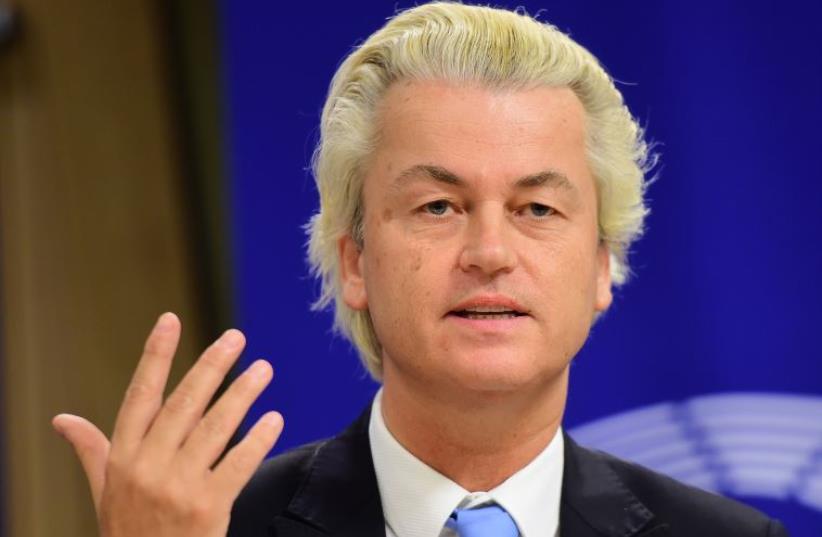 Geert Wilders
(photo credit: EMMANUEL DUNAND / AFP)
Advertisement
AMSTERDAM - Campaigning for the Dutch election began on Wednesday with anti-Islam leader Geert Wilders frontrunner in a vote that will test the anti-establishment sentiment that swept Britain out of the European Union and Donald Trump into the US presidency.Wilders, a eurosceptic, anti-immigration fan of Trump, has dubbed the March 15 parliamentary election the start of a "Patriotic Spring" in Europe, where French and German voters go to the polls in May and September.Wilders and his Party for Freedom has led in opinion polls for most of the past two years, but the fragmented political landscape means a coalition government of four or more parties is all but inevitable.His main rival, Prime Minister Mark Rutte of the conservative VVD Party, is banking on a strengthening economic recovery to restore popularity lost during the austerity years of 2012-2014.The two announced on Wednesday they will face off head-to-head in a televised debate on March 13.Wilders' party is expected to get 20 percent of the popular vote, compared to Rutte's 16 percent. A simple majority is generally sought to govern, but all but one party have ruled out sharing power with Wilders, whose policies are seen by many as offensive and sometimes unconstitutional.There are 31 parties competing for votes, with 14 likely to win at least one seat in the 150-member parliament. The next three largest parties command no more than 10 or 11 percent of the vote each."The overwhelming majority of Dutchmen basically do not vote for (Wilders)," said Kristof Jacobs, a teacher at Radbout University in Nijmegen.NO "NEXIT"So a victory for Wilders is unlikely to lead to the Netherlands leaving the European Union, closing the border to Muslim immigrants or reinstating the Dutch currency, policies only his party endorses.In December, Wilders was convicted of inciting discrimination for leading supporters in a chant that they wanted "Fewer! Fewer! Fewer!" Moroccans in the country.A study published by the Social Affairs Ministry on Tuesday found that up to 40 percent of the Turks and Moroccans in the Netherlands do not feel they belong or are accepted.If Wilders' PVV party finishes first but is unable to form a government, Rutte will be left trying to forge a centrist coalition with several parties that share little more than opposition to Wilders.In that case "we will stay put and manage the country until there is a new coalition," Finance Minister Jeroen Dijsselbloem said on Tuesday, quipping the situation could persist for "years" under the constitution.The Netherlands, a country of 17 million that relies heavily on foreign trade, in 2005 rejected the European constitution and last year voted down a treaty for closer EU ties with Ukraine.A poll by Motivaction on Tuesday showed more than 61 percent of respondents see Dutch politicians as "elitist, unreliable and dishonest."Around 37 percent of likely voters said they hadn't decided who to vote for."I find it difficult to make a decision," said Renee Keijzer, from the town of Volendam. "So much has happened in the world that it is hard to position yourself properly."