Time running out to decide whether Iran can make a deal, Western diplomats say

Nearly 10 months after the negotiations started – with a five-month break imposed by Iran - the hardest issues remain, they say.

Negotiations for the US and Iran to return to the 2015 nuclear deal are nearing the point where a decision must be made or that agreement will no longer be salvageable, European diplomats said on Friday, as the negotiating teams returned to their capitals for consultations.

“January has been the most intensive period of these talks to date,” negotiators from the US State Department and the E3 – France, Britain and Germany – said in a statement at the end of the eighth round of talks in Vienna. “Everyone knows we are reaching the final stage, which requires political decisions.”

Brett McGurk, the White House’s national security council Middle East coordinator, said on Thursday that “we’re in the ballpark of a possible deal... [but] there’s also a very real chance that these talks could collapse very soon.”

Western diplomats have said that Iran is moving too slowly in the talks to revive the Joint Comprehensive Plan of Action while it enriches and stockpiles uranium, and that weeks, not months, remain until the restrictions of that deal will have been irreversibly hollowed out.

Nearly 10 months after the negotiations started – with a five-month break imposed by Iran – the hardest issues remain, they say. 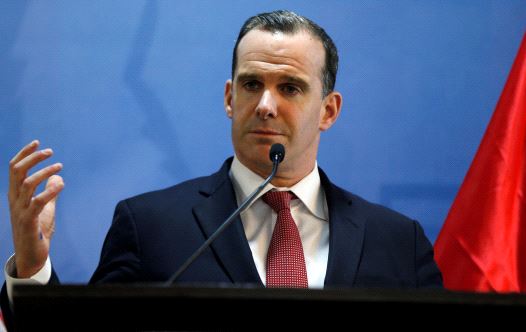 A French presidential official told reporters the main sticking points included the guarantees Iran is seeking to ensure that there is no second US withdrawal from the deal.

“The negotiation today remains difficult because the question of guarantees and the modalities to put Iran’s nuclear program back under control need to be clarified, but there are a few indications that the negotiation can conclude [positively],” the official said.

Iran has demanded that the US promise that its next president will not withdraw from the JCPOA, which is supposed to last until the end of 2030. However, US law does not allow a current president to dictate foreign policy for the next one, especially since the nuclear deal is not a treaty ratified by Congress.

One of the other issues in the negotiations is sequencing, meaning the order in which sanctions are lifted and nuclear restrictions are implemented, through measures like the shipping of excess enriched uranium abroad. Iran sees the resumption of economic activities, after the announcement that sanctions are lifted, as verification of their removal and part of the deal.

Also slowing down the talks is Iran’s refusal to negotiate directly with the US, requiring the EU, E3, Russia and China to go back and forth between the Iranian and American delegations.

“Participants will go back to capitals for consultations and instructions... [but] political decisions are needed now,” the Vienna talks’ coordinator, Enrique Mora of the European Union, tweeted.

A separate EU statement said talks would resume next week.

The JCPOA restricted Iran’s nuclear program, while gradually lifting sanctions. The US left the deal in 2018 and added more sanctions to pressure the regime in Tehran, which had continued its proxy warfare throughout the Middle East in the interim. Iran has since enriched uranium to 60%, far beyond the JCPOA’s limitations, within reach of 90%-enriched weapons-grade uranium.

US National Security Adviser Jake Sullivan said in a call with his Israeli counterpart Eyal Hulata on Wednesday that “the United States is preparing alternative options, in coordination with its partners, should diplomacy fail.”

How much any political decisions will accelerate the talks remains to be seen. Russia’s top envoy, Mikhail Ulyanov, who is often the most optimistic delegate, tweeted: “My instinct tells me that agreement will be reached soon after mid-February.”

The International Atomic Energy Agency is expected to release its next report on Iran’s nuclear program in mid-February, regarding decades-old nuclear material found at four sites in Iran, for which the regime has not provided a convincing explanation.

The next IAEA board meeting is scheduled for March 7. Iran has repeatedly used JCPOA negotiations as leverage to avoid censure by the agency’s board for obstructing inspections and violating the nuclear agreement.