Why is the fall of Kherson important and what are the implications for strategy planning in the Russia-Ukraine war?

The fall of the Ukrainian city of Kherson on Wednesday night has major strategic significance, allowing the Russian military to utilize their Black Sea Fleet to attack cities, establish logistical lines, and divide Ukraine in two.

Kherson sits above the delta of the Dnieper River where it flows into the Black Sea. The Dnieper cuts directly through the center of Ukraine; it is wide, though it is as shallow as three meters in some locations. Zaporizhzhia, Dnipro and Kyiv and other major cities all sit on both banks of the Dnieper, and have ports, bridges and locks to allow civil navigation and commercial transportation.

“The Dnieper is a major transportation artery for Ukraine, and its dams provide power to a lot of Ukrainian industry, as well as civilians,” according to Dr. Scott Savitz, a senior engineer at the RAND Corporation, a US nonprofit global-policy think tank. “It cuts through the heart of Ukraine. It is for Ukraine what the Mississippi River is for the US.”

On Wednesday, Kherson Mayor Igor Kolykhaev acknowledged the city’s capture and met with the Russian commander who plans to set up a military administration. 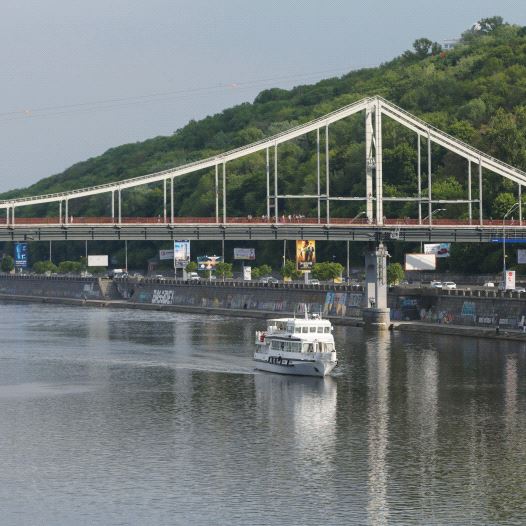 A MOTORBOAT passes under a footbridge over the Dnieper River in Kiev, Ukraine. (credit: REUTERS)

“The Buyan-class and Buyan-M-class corvettes only have drafts of two and 2.5 meters, respectively,” said Savitz. “Both are relatively small... small vessels are good for riverine fighting; they’re agile and can host various weapons that can be useful in the confined battle space.”

The fleet also has troop transporters and patrol ships that could enter the Dnieper. Given the significant commercial traffic in the river, the Russian military could also requisition and repurpose civilian vessels.

The invasion of Ukraine has been marked by logistical problems. Russian mechanized forces entered deep into enemy territory, but they seem to have been stalled by the inability to have their supply lines keep up and provide soldiers with ammunition, food and fuel. The war is becoming known as a “TikTok war” due to videos on social media of abandoned and fuel-less Russian armored vehicles and T-90 tanks.

The Dnieper could provide a new way to supply troops by ferrying them war-fighting necessities to captured riverside towns and cities.

“If the Russians attain control of much of the Dnieper River, it enables them to split the country, control the flow of commerce and move vehicles, equipment, people and supplies through many of the river’s tributaries,” Savitz said.

There have also reportedly been communication issues for the Russian forces. The navy could serve as a communications hub for terrestrial forces and general command.

Moving warships up the Dnieper would provide a new angle of attack for Russian forces.

They could “conduct intelligence, surveillance and reconnaissance or electronic warfare from ships, target key locations with guns and other short-range weapons from ships and/or launch amphibious operations against Ukrainian cities or other locations,” Savitz said. “In this confined environment, they could use lots of small vessels that aren’t even necessarily designed as warships and lots of traditionally land-based weapons, like rockets or mortars.”

As it is, the Dnieper passing through Kyiv and other major cities hinders their encirclement and endangers Russian forces by dividing them.

“Control of the river would also enable them to shuttle ground forces from one side to the other, whether via existing bridges, improvised bridges or vessels,” Savitz said.

As the Dnieper bisects Ukraine, its seizure could cut off western Ukraine, where military equipment is being shipped to from the rest of Europe, and isolate eastern Ukrainian forces from supplies and reinforcements. A militarized river could become a new boundary dividing the state politically.

“If they’re thinking about dividing Ukraine in half, with the river as the border, that’s an option,” Savitz said. “Bodies of water often form defensible boundaries.”

As Kyiv and other cities are on both river banks, they could be divided as well and more easily captured in weakened pieces.

“There’s a high potential for cross-river infiltration when there are urban areas on both sides, but the existence of a physical barrier could limit back-and-forth movements,” Savitz said.

How can Ukraine defend the Dnieper?

“The Ukrainians can take a few approaches to hinder Russian navigation of the Dnieper,” Savitz said. “They could deploy naval mines – whether mass-manufactured or improvised – to inflict casualties and potentially compel the Russians to engage in time-consuming, resource-intensive mine countermeasures [that are] slow and predictable, mostly done with relatively fragile platforms and equipment, making them easy to target with other weapons.

“The Ukrainians could even use drifting mines, which is legal under international law as long as the mines self-destruct within one hour of release.” They could also use explosive-laden vessels, he added.

Ukraine could also take a page from the Russian playbook: block-ships. During the 2014 annexation of Crimea, Russia sank two obsolete vessels to trap the Ukrainian Navy in its port.

“Sinking a series of ships in the channel would require days or weeks of intensive salvage operations to clear,” Savitz said.

Sabotaging locks and collapsing bridges could also be used to inhibit traffic, and booby traps and pop-up attacks from insurgents along the shoreline could further inhibit either mine countermeasure operations or salvage to clear block-ships,” he said.

There are many dangers to Ukraine presented by the fall of Kherson and Russian access to the Dnieper River, but being aware of them may enable Ukraine to counter the threats.