Russia's Black Sea Fleet has taken notable losses during the war in Ukraine and some of its shipyards have reportedly been unable to properly construct warships or conduct maintenance. 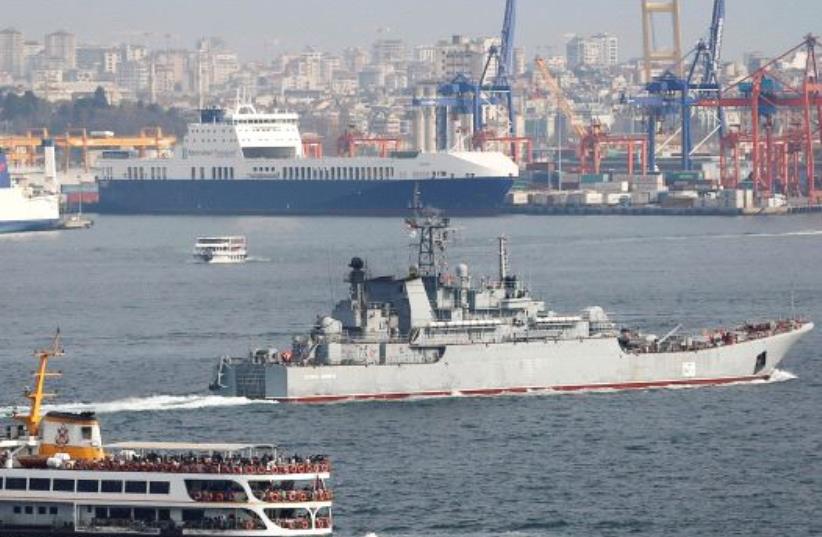 THE RUSSIAN Navy’s landing ship ‘Caesar Kunikov’ sails in the Bosphorus near Istanbul earlier this month on its way to the Mediterranean Sea.
(photo credit: REUTERS)
Advertisement

"We have three shipbuilding plants and all the opportunities for us to revive the historical industry – shipbuilding – In Kherson," Stremousov told RIA.

Russia's Black Sea Fleet has taken notable losses during the war in Ukraine, and according to the Ukrainian Intelligence Directorate (GUR), some of its shipyards have been unable to properly construct warships or conduct maintenance on vessels due to financial hardships and lack of foreign components.

A Vladivostok shipyard was allegedly unable to meet 25 billion rubles worth of government orders to build two tankers and two missile boats, and to maintain and repair other vessels, GUR claimed in early April.

A supposed internal Russian Defense Ministry report obtained by the directorate said that a lack of foreign components was preventing the construction of warships parts and naval warfare systems, such as steering columns, navigations systems, radio stations and charges for naval artillery shells.

According to the Ukrainian military, as of Wednesday, Russia has lost 13 warships since the invasion began on February 24. The two most significant naval losses were the Moskva and the Saratov.

The Saratov, a Tapir-class landing vessel resupplying Russian forces fighting in the Mariupol region through the occupied Ukrainian port of Berdyansk in late March, was sunk as it was unloading munitions when it was hit by a Ukrainian ballistic missile strike. Two other vessels, Tsezar Kunikov and Novocherkassk were reportedly damaged.

The Moskva was the Black Sea Fleet flagship. The Atlant-class guided-missile cruiser had been hit by two Ukrainian-made Neptune anti-ship cruise missiles on April 13, according to the Ukrainian military. Russia's Defense Ministry claimed that the explosion was caused by a fire that had detonated the cruiser's ammunition stores.

Russian naval forces attempted to tow the ship to the harbor, but it sank in stormy weather.

Since the sinking of the Moskva, Russian vessels have kept their distance from the coast to avoid anti-ship missile strikes.

"I think we've seen the negative impact that the Russian blockade of the Black Sea has had, and continued Ukrainian fears about Russia targeting Odesa and other critical ports around the Black Sea. So this is a capability that provides them significantly stronger deterrence."

As Russia seeks the possibility of constructing warships in Kherson, the US has committed to enhancing the anti-ship arsenal of the Ukrainian military. A senior US defense official said in a Wednesday Pentagon briefing that Washington would be supplying Kyiv with vehicle-mounted Harpoon launchers, "which will bolster Ukraine's coastal defense systems." Other allied nations will provide the missiles. Denmark has already begun to provide Ukraine with Harpoons.

"A Harpoon is intended for coastal defense," said the senior official. "I think we've seen the negative impacts that the Russian blockade of the Black Sea has had, and continued Ukrainian fears about Russia targeting Odesa and other critical ports around the Black Sea. So this is a capability that provides them significantly stronger deterrence."

While the US officials at the Wednesday briefing indicated there were no new concerns about an amphibious assault by Russian forces, a landing force attacking Odesa remains a concern that the Ukrainian military has expressed since the war began.

But experts have said that the likelihood of an amphibious Russian assault is low.

"If they tried to put a bunch of amphibious troops and assault force into an amphibious task force and they tried to move them toward Odesa, it's very obvious that they're coming," RAND National Security Supply Chain Institute director Captain (ret.) Bradley Martin previously told The Jerusalem Post. "They're easy to detect, and a lot of them will get sunk. It would probably be very difficult for Russia to carry off an invasion like that."

Martin said that such an operation wasn't entirely "off the table, but it would be very expensive, very risky and very difficult for them to carry out."

Stremousov also told RIA on Thursday that civilian ships could be produced in Kherson.

Russia has deepened its control of the strategic port city since it occupied it early in the war. On May 31, US State Department spokesperson Ned Price warned that Russia may be considering annexing Ukraine's Kherson region like it did Crimea, or it may turn it into an independent pro-Russia polity like Donetsk and Luhansk. Russia has offered residents citizenship, and Stremousov has said that there might be a referendum at the end of the year on joining Russia.