Some call it dictatorship; others see it as needed to end political paralysis and economic decline

Tunisians voted on Monday to approve a new constitution that greatly expands the president’sauthority. The referendum received over 90% support, but only 27.5% of registered voters cast ballots asthe opposition boycotted the initiative. The referendum came a year to the day after Tunisian President Kais Saied declared a state of emergency, dismissed the government, and suspended parliament. He has ruled by decree eversince.

“Tunisia has entered a new phase."

The newly approved constitution will mark an official transition from a hybrid parliamentary democracy to a presidential-centered system. Saied said in a press release while celebrating on Tuesday that “Tunisia has entered a new phase,” and that the turnout would have been higher if the voting had taken place over twodays. 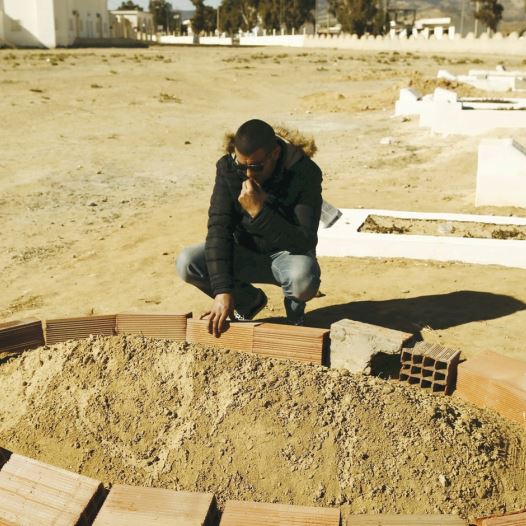 Five years after Tunisia’s Arab Spring, an unemployed graduate, Rabie Gharssali, visits the grave of his friend, Ridha Yahyaoui, who killed himself after being refused a job (credit: REUTERS)
Tunisia was the birthplace of the Arab Spring that began in 2011, when the people took the streets to oust President Zine El Abidine Ben Ali, who had ruled as a dictator since seizing power in a bloodless coup in 1987. Tunisia had been considered the most successful country emerging from the Arab Spring as it transitioned to democracy and a broadly agreed upon constitution adopted in 2014 that created the hybrid parliamentary system.

Riccardo Fabiani, North Africa Project director at the International Crisis Group, told The Media Line the motivation behind the decision of so many to abstain from voting has yet to be accurately analyzed.He did say, however, that what is certain is that “the new constitution and the campaign have failed to mobilize a significant section of the population and probably to respond to their expectations.”

While the low turnout does undermine the legitimacy of the president’s initiative, “he is unlikely to stop at that,” Fabiani added.

Indeed, Nelia Charchour, a Tunisian democracy activist, said she is happy with the low turnout since it “considerably reduces the legitimacy of the new constitution.

“Only around 27% of voters voted ‘yes,’ and those are the ones that are happy to have a leader. Which is far from being a majority against democracy,” she said.

With such a low level of legitimacy, autocracy or even theocracy are almost impossible, Charchour continued. “Of course, we Tunisian people need to stay very vigilant,” she added. However, Kilian Kleinschmidt, a foreign entrepreneur and an investor in Tunisia, has a different view regarding the importance of the low turnout.

Low turnout is common in Tunisia, he told The Media Line, citing two factors he believes mighthave caused it on Monday. First, he said, there is the feeling among many Tunisians that they cannot change things and their lack of trust in the political system. The second factor relates to the conditions on the dayof the vote. “Let’s keep in mind as well that it was super-hot and it was a public holiday, which was perhapsnot a good choice. People were at the beach on Monday,” Kleinschmidt said. He added that while many Tunisians do not like the new constitution, they believe Saied might be able to provide the turnaround that the country so desperately needs. Despite all their criticism of the structure of the constitution, Kleinschmidt said, “for them, it is a chance for change, and that’s what they’re looking for. “I think that people are not against strong rule by somebody who can actually take action and will take action. Because in a way democracy has been dysfunctional, and they didn’t see anything [good] happening,” he continued.

The country has been suffering from an absence of decision makers as the economy has been “going down the drain,” Kleinschmidt said.

Fabiani noted that the constitution will continue to be a divisive issue in Tunisia. “Opponents of this project openly call it a dictatorship, whereas his [the president’s] supporters deny that thisis the case.”

He added that Saied has alienated the elites and that his support has decreased dramatically since he declared the state of emergency back in July 2021. “The risk is that Saied’s isolation could render his power fragile and push the country toward a new bout of instability and potentially violence,” he continued. “His refusal to negotiate withanyone or to seek support outside of his own circle is worrying.” The newly approved constitution aims to build a completely different political system, far removed from the consensus-based parliamentary democracy that Tunisians agreed on in 2014, Fabiani noted.