Canadian diplomat tries to hide meeting with Rajoub after uproar

The Canadian Representative Office to the Palestinian Authority deleted a tweet about its top diplomat’s meeting with Palestinian official Jibril Rajoub, describing him as a “friend of Canada,” following an uproar.

Rajoub served time in Israeli prisons for terrorism. As Yasser Arafat’s top security adviser, he used torture to stifle political dissent. In more recent years, he has been the head of the Palestinian Football Association and the Palestinian Olympic Committee.

He led a campaign for FIFA to boycott Israel and was banned by the international soccer association for inciting violence against the Argentinian national team that had planned to play a friendly match in Israel.

The Canadian Representative Office tweeted a photo of its top diplomat, Robin Wettlaufer, with Rajoub and said she had “another fascinating discussion on Palestinian and regional politics with Lt.-Gen. Jibril Rajoub – a great friend to Canada.”

The tweet was deleted within hours, but not before it raised an uproar in Ottawa.

MPs Yaara Saks and Anthony Housefather of the ruling Liberal Party said they “vehemently object to Jibril Rajoub being described as friend of Canada. He has been charged with glorifying terrorism, and is guilty of inciting hatred and violence against Israelis by politicizing sport. He does not share our values as Canadians.” 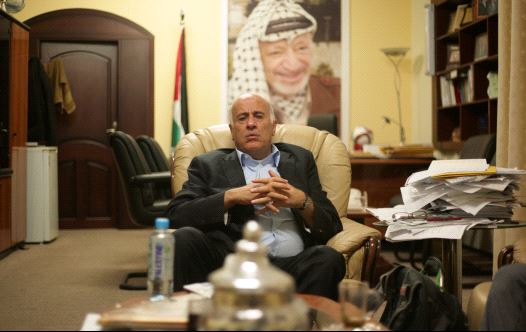 Jibril Rajoub in his office in Ramallah on December 7, 2015 (credit: ELIYAHU KAMISHER)

A Canadian official tells a terrorist he’s a “great friend to Canada.” Jibril Rajoub has been convicted of committing multiple terrorist attacks. He uses sports to incite hatred, FIFA agrees. A great friend?Will you denounce this? @melaniejoly cc:@AHousefather #cnpoli https://t.co/xjw8V7K00F

Global Affairs Canada said it was deleted because they are “aware of Canadians' distress over the content of the tweet.”

“Canada is a steadfast friend and ally of Israel and friend of the Palestinian people,” Ottawa stated. “Canadian diplomats frequently engage with representatives of the Palestinian Authority, Israeli government, and members of civil society, on a wide range of diplomatic, trade, security, development, and humanitarian files. We are committed to the goal of a comprehensive, just and lasting peace in the Middle East, including the creation of a Palestinian state living side by side in peace and security with Israel.”

"We are committed to the goal of a comprehensive, just and lasting peace in the Middle East, including the creation of a Palestinian state living side by side in peace and security with Israel."

At the same time, the ministry said, “Terrorism must be rejected as a means for achieving political ends. Our position remains that this can only be achieved through direct negotiations between the parties. We continue to urge the parties to create the conditions for such negotiations to take place.”

Canada’s Center for Israel and Jewish Affairs pointed out that the Representative Office had previously tweeted about a meeting with Rajoub last month, saying it was “a pleasure.”

"Rajoub's body of work includes this statement: '...in the name of Allah, if we had nuclear weapons, we'd be using them.'...Astonishingly poor judgement by Canadian officials," the organization tweeted.

The outrage over the Rajoub tweets come amid revelations that Ottawa paid C$130,000 (about $107,000) for an initiative against racism in broadcasting, led by Laith Marouf, who was found to have written dozens of antisemitic tweets.

“You know all those loud mouthed bags of human feces, a.k.a. the Jewish White Supremacists; when we liberate Palestine and they have to go back to where they come from, they will return to being low voiced bitches of thier (sic) Christian/Secular White Supremacist Masters,” read one tweet by Marouf.

"The little castrated bitches who are rampaging through old Jerusalem and al Aqsa Mosque today will be packing their bags and going back to where they onced were treated as bitches and never dared to fight back. Come take your garbage Europe!" Marouf tweeted in May of this year.

“All the tears about the Holocaust are not because it was a genocide which it was, but because its victims were Europeans,” he wrote last year.

Canadian Minister of Diversity Ahmed Hussen cut funding to Marouf’s organization, the Community Media Advocacy Center, after the tweets were published in the media.

However, Canadian legislators and activists against antisemitism, including Housefeather, had warned Hussen and his office about Marouf when he was first hired in April.

Marouf has a long history of extreme anti-Israel activism and was one of the organizers of a riot at Concordia University when former prime minister Benjamin Netanyahu was scheduled to speak in 2002.