How much did the West know about smuggling of girls to ISIS? - analysis

Many teenage girls from different European countries that joined ISIS may have been aided by a man in their path to ISIS who was also giving information to Canadian "intelligence."

A member loyal to the Islamic State in Iraq and the Levant (ISIL) waves an ISIL flag in Raqqa June 29, 2014. The offshoot of al Qaeda which has captured swathes of territory in Iraq and Syria has declared itself an Islamic "Caliphate" and called on factions worldwide to pledge their allegiance, a st
(photo credit: REUTERS/STRINGER)
Advertisement

A new report has emerged that asserts teenage girls were aided in their path to join ISIS by a man who was also providing information to Canadian “intelligence.”

The BBC report says that “Shamima Begum, who fled the UK and joined the Islamic State group, was smuggled into Syria by an intelligence agent for Canada.” The story is bigger than Begum, even though she has become a symbol of the overall conflict with ISIS and its aftermath.

What the BBC says is that “Ms. Begum was 15 when she and two other east London schoolgirls - Kadiza Sultana, 16, and 15-year-old Amira Abase - traveled to Syria to join the terrorist group IS in 2015,” and that they met a man in Istanbul who helped facilitate their trip illegally across the border to Syria.

These allegations could now be central to a case challenging the fact that the UK stripped Begum of citizenship. Begum has become a kind of symbolic cause because her story was well known at the time she ended up in Syria; and then later when the war on ISIS ended and she ended up in a displaced persons camp. This is part of the media spotlight that tends to try to humanize those who went to join ISIS, rather than the victims of ISIS genocide and crimes. Media who cover this issue will even pose the women who joined ISIS with “western clothes” to show they are “like us.” The argument is that women who joined ISIS were victims of trafficking, especially if they were under 18. The problem with this narrative is that the victims of ISIS were also often under 18. There were thousands of women and girls from the Yazidi minority abused by ISIS and sold into slavery. If it’s true that the media is primarily interested in the story of young trafficked women, then the story of the ISIS victims would be equal to the story of Begum. But western media portrays women from the West who went to join ISIS as “us” and the Yazidis are seen as foreigners, less deserving of attention, or being humanized. For instance, no reports on Yazidi women seek to assert that “they dress like us” as a form of sympathy.

What is interesting about the new account of how British teenage girls ended up in Syria is that it reveals the degree to which western intelligence agencies may have known a great deal about the movement of people to join ISIS. It is believed that thousands of people from Europe, some of them converts and some of them local extremists, went to join ISIS in 2013-2015. In many accounts of the Yazidis who suffered genocide at the hands of ISIS, the westerners who joined ISIS were often the cruelest and most brutal and tended to treat locals in Iraq and Syria as subhumans. For instance, there is the case of a German woman who helped kill a five-year-old girl “slave” she and her ISIS husband had kidnapped.

Displaced Iraqi women who fled from clashes sit together during a battle between Iraqi forces and Islamic state militants in western Mosul, Iraq, May 17, 2017 (credit: REUTERS/ ALAA AL-MARJANI)

What did western intelligence know?

This raises questions about why western intelligence knew so much about people joining ISIS but didn’t do much about it at the time. Instead, the western governments ended up joining an international coalition against ISIS. The UK, US, France and others spent years fighting ISIS. Citizens of many European countries were members of ISIS and these countries didn’t want their citizens to return. In many cases, their citizens died in Iraq or Syria. What’s strange is that less was done to interdict those citizens on their way to Syria. Most of the thousands who traveled from Germany, Holland, Belgium, the UK, France and other countries went through Turkey. At the time some western countries were backing the Syrian rebels. Some of these countries were concerned about the radicalization of their own citizens who went to fight alongside the rebels and some countries began to offer incentives for the citizens to come back. One incentive even reportedly included free gym memberships. But by the time ISIS began its genocide and the international coalition was formed it became clear the wayward western citizens who had become radicalized were not involved with a vicious genocidal terrorist organization. It became less palatable to bring the citizens home after terror attacks in France and Belgium.

This then began the saga of stripping the Europeans of citizenship and leaving them at the Al-Hol camp in Syria when the war was over. Thousands of these people ended up in the Al-Hol camp, including women and children of ISIS members. Some countries took the women and children back,  but many have abandoned them. The media have highlighted this situation. The issue here is that the same western countries who didn’t prevent their citizens going to join ISIS and apparently knew a lot via intelligence assets about these citizens then didn’t want to bring them home and have tasked the US-backed Syrian Democratic Forces with keeping them in detention. The West won’t let these people be turned over to the Syrian regime or Iraq, they prefer that a non-state entity like the SDF run Al-Hol. Al-Hol has become a brutal black hole now, not because of the SDF but because the ISIS supporters there; many of them women, have continued to run a mini-ISIS state inside the camp; complete with murders of dissidents and torture.

The question now is whether the West is partly culpable for not preventing its citizens from being trafficked or smuggled to join ISIS. The question now is how much did these “assets” who were helping move ISIS members across the border but also feeding back details to the West, made the current situation possible. 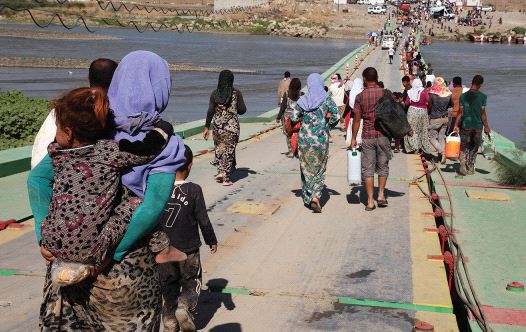 YAZIDI WOMEN and men flee Islamic State on August 10, 2014 in northern Iraq. Many were captured by ISIS, raped tortured and executed, a crime that continues to this day. (credit: REUTERS)

While it’s usually understood what western intelligence agencies will want to keep tabs on terrorists, there are often questions about the lengths to which some may go to work with groups who are linked to extremists. What happens when an informant is providing information but also radicalizing people? What happens when someone who is supposedly “helping” the West is also working with groups that oppose the West? The West has a problematic history of allying with extremist groups and regimes; whether it was backing the Mujahideen against the Soviets, or western diplomats who wanted to work with Pakistan, which backed the Taliban, or works with Turkey and Qatar; which support extremists. For instance, Turkey has backed extremists in Syria who are sanctioned by the US, such as Ahrar. Al-Sharqiya and Hayat Tahrir al-Sham; and it’s clear that in some cases western experts have wanted to work with these groups. This is part of the dangerous logic that has led some to believe that extremists can be “used” against common enemies. But exploiting contacts with extremists usually makes for bad bedfellows and results in the extremists having some privilege, able to avoid detention and operate until their abuses become too large to ignore.

It’s likely that Western countries knew a lot about all the extremists going to Syria. Those extremists eventually fueled genocide in Iraq. Keeping tabs on them is not the same as collaborating with them, but when teenage girls were being smuggled it would appear that western governments had a duty to try to stop the smuggling of their underage citizens and a duty to warn those citizens. The argument can be made that the situation was fluid and chaotic; that some westerners in Amman received word from their source in Istanbul that girls were going over the border to join ISIS may have been too late to do much about it. But it raises questions of oversight. Did those westerners who knew about what was going on communicating with other agencies, or did they keep this information to themselves as part of their own work with groups, narrowly tailored to one intelligence gathering cause?

Throughout the war on ISIS, there has been balkanization in the West regarding policy in Syria. While some parts of governments worked with Turkey and wanted to work with the Syrian rebels; other agencies and parts of the government were working with other groups. For instance, US Central Command formed a close relationship with the SDF to fight ISIS. Meanwhile the US State Department tended to see the SDF as a temporary, transitional and transactional relationship. US special forces were with the SDF in the trenches, while some US diplomats were doing outreach to Turkish-backed groups that Ankara was using against the SDF. That means the US government was actually fighting itself, using proxies on both sides. This kind of compartmentalization and failure to communicate evokes the failures of the US before 9/11 to coordinate counter-terrorism efforts. The failure to stop citizens of the UK and other states from traveling to join ISIS is another example where it wasn’t just “chaos” that led to the West dropping the ball; in some cases, more could have been done.