Dmitry Medvedev's predictions were ostensibly part of a series of “New Year” predictions and could be seen as a kind of mocking or jest, but they also reveal Moscow's mentality.

Former Russian president Dmitry Medvedev, deputy chairman of the Security Council of the Russian Federation, has unleashed a barrage of tweets predicting the decline of the West.

His predictions were ostensibly part of a series of “New Year” predictions and could be seen as a kind of mocking or jest, but they also reveal the overall mentality that guides Moscow’s current foreign policy.

The predictions should be taken seriously because Russian state media also reported them.

The Russian state media report highlighted claims that oil would become much more expensive and that the UK would return to the EU. It also highlighted a bizarre claim that there would be a new form of Nazi Germany, called the “Fourth Reich,” and civil war in the US.

The predictions by Russia’s former leader also are important because this isn’t just some nobody or some TV personality; this is a Russian leader who continues to play a role and was once taken seriously in the West. 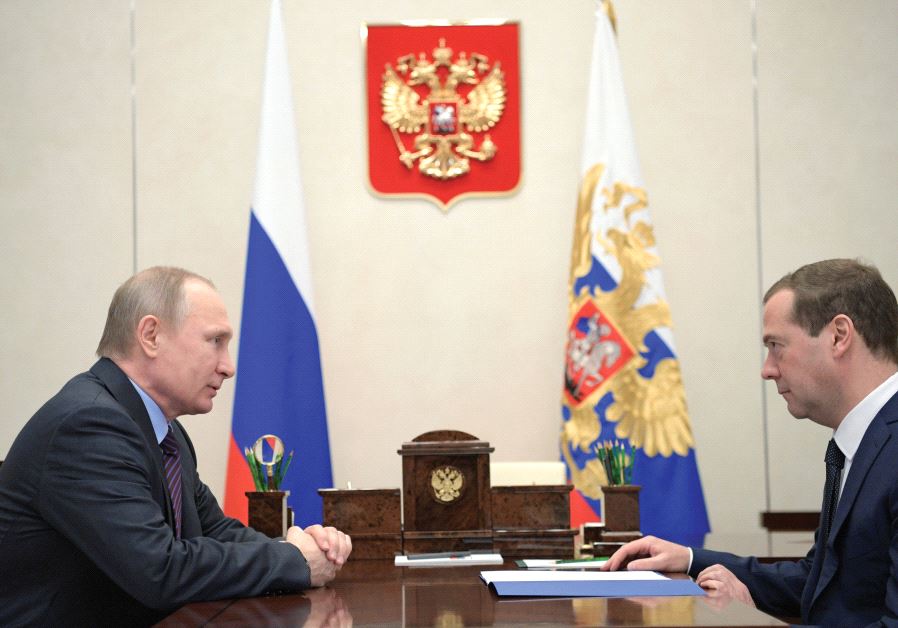 It wasn’t long ago that Western foreign-policy experts would discuss Russia’s “interests” and see it as a “rational” actor. It has become increasingly clear that Moscow’s leadership is not interested in anything rational; rather, it is bent on destroying the West. Its attempts to meddle in Western elections and spread conspiracies are clearly part of a larger agenda to sow chaos in the West.

Russia knows that it has many problems at home, including demographics and a military that so far has failed in Ukraine. Therefore, it knows that to defeat the West, one has to divide the West because it can’t be defeated in a fair fight.

Medvedev’s predictions combine some points that clearly represent Moscow’s views, with those that might be better described as “trolling” or posting just to cause controversy.

Let’s look at some of the predictions.

HIS CLAIM that the price of oil will skyrocket is interesting, and it jives with Russia’s desire to increase energy costs in the West.

He also claims that the world’s largest stock markets will migrate to Asia. This is also a claim that is rooted in Russia’s decision to invade Ukraine and gamble that Asia is what matters today.

Critics of Russia’s invasion are mostly in the West, not in places like India or China. Russia believes the economic future is in Asia and via some groups Russia is a member of, including the Shanghai Cooperation Organization and the Conference on Interaction and Confidence-Building Measures in Asia.

Russia believes the IMF and the World Bank are not as important as they once were. This is a classic challenge to the neoliberal world order, the one where the US was a leader of a “rules-based” international order.

The former Russian leader also challenged the Bretton Woods system of monetary management, claiming it would decline. Bretton Woods was an agreement for financial relations among countries after World War II and was rooted in the economies of the US, Europe, Canada, Australia and Japan.

It helped guide monetary relations among countries and was rooted in the conversion of currencies to the US dollar and vice versa. The Soviet Union was not part of this system, and Russia would like to support an alternate system today. Articles in the past have spoken about an “Asian Bretton Woods.”

Medvedev’s other predictions are more outlandish.

He thinks the UK will rejoin the EU and that Northern Ireland will leave the UK and join Ireland.

He predicts the decline of the euro.

He also claims that Hungary and Poland will “occupy western regions of the formerly existing Ukraine.”

He then claims that a “Fourth Reich” will come into being that includes Germany, Poland, the Baltic states, the Czech Republic, Slovakia and what he calls another republic based in “Kyiv.”

These claims seem to be contradictory. Why would Northern Ireland rejoin Ireland if the UK rejoins the EU? Why would Poland and Hungary occupy Ukraine, when Hungary generally sides with Russia? How would a new German “Reich” emerge and takeover Kyiv if Ukraine doesn’t exist? None of this makes sense, and it’s not meant to make sense.

The Russian predictor also claims the US will fall into civil war and that California and Texas will become new countries. Texas will ally with Mexico, he thinks. This makes no sense. Obviously, this is just another Russian attempt to sow chaos and feed rumors about US civil strife.

THE OVERALL point he is making is rooted in Moscow’s view of the world order. Russia thinks the international system and state borders don’t matter. Russia wants the EU to collapse, and it is hoping to see more controversies. Russia also has fantasies that it is fighting “Nazis” in Ukraine and thus wants to believe that Western countries will form a new “Reich.”

(R-L) Russia's State Duma Speaker Vyacheslav Volodin, President Vladimir Putin and Dmitry Medvedev, who was nominated as the candidate for the post of Prime Minister, walk before a session of the State Duma, the lower house of parliament, in Moscow Russia May 8, 2018. (credit: Sputnik/Alexander Astafyev/Pool via REUTERS)

More serious is his prediction that Ukraine will cease to exist. This has been Moscow’s policy. Russia wanted to occupy Kyiv and then leave a rump state of western Ukraine to be occupied by the West. Russia now is openly talking about “partitioning” Poland. These are dangerous comments from an official.

The comments come as Russian Foreign Minister Sergey Lavrov has said Moscow can no longer maintain normal ties with the US. Ukrainian President Volodymyr Zelensky has been reaching out to India regarding discussions of a peace deal with Moscow. But Lavrov on Monday said Ukraine must fulfill Moscow’s proposals regarding their “new territories,” or the Russian military would take action, TASS reported.

Of course, Russia and the West could climb down from this. Considering the comments by people like Medvedev, however, and Russian President Vladimir Putin’s previous comments about the decline of the West, it’s difficult to see how the West can ever really negotiate with or deal with Russia again in a normal way.

Russia has said what it thinks and shown its overall policy. Unlike China – which is more cautious and measured in its rhetoric, even though it, too, wants to upend the US-led world order – Russia is becoming more extreme. The New Year’s “predictions” are an example of this extremism and how Moscow thinks everything is up for grabs.

Countries should be very wary and concerned because a Moscow that believes it is not tethered by rules could do something more dangerous. On the other hand, it is well known that some politicians like to appear more threatening than they are in order to get concessions. During the Nixon era, the US president also tried to convince others that he was a bit of a “madman” in order to create fear in his adversaries.

Russia also has a case of this “madman” doctrine, combined with a policy rooted in dividing the West and empowering Asia.