Crisis center operator tells caller seeking transport to Israel for Brussels bombing victims that Israel does not exist and is in fact called Palestine. 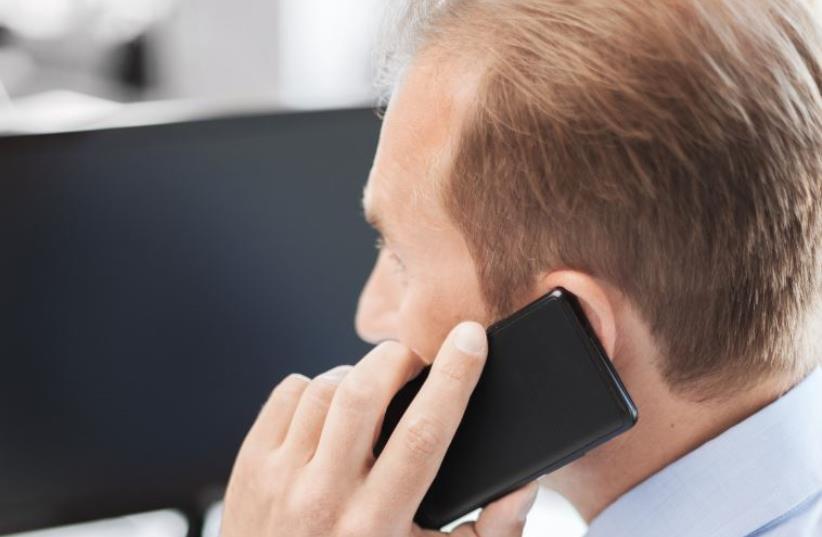 Man on Phone
(photo credit: INGIMAGE)
Advertisement
Belgian Jews reacted with shock on Thursday when an operator working Belgium’s federal hotline on the terrorist attacks in Brussels told a Jewish caller that Israel does not exist and is in fact called Palestine.The call Thursday to the Belgian Interior Ministry’s hotline was recorded and the audio file posted on the website of Joods Actueel, a Belgian Jewish monthly.In it, a man who presented himself as a volunteer for Antwerp’s Jewish Coordination Committee told the operator in Flemish that he was calling on behalf of two people who were wounded in the March 22 attacks in Brussels and wish to be discharged from the hospital, as they are “being prepared to be transported to Israel.” The caller asked about the procedure for discharging them.In the recording, the operator can be heard responding, “That’s actually... to Palestine.” The Jewish caller insisted, “Not Palestine, Israel,” prompting another correction by the operator, who retorted, “Yes, but it was Palestine before, of course.”He also said about Israel: “It’s called Palestine, sir.”Asked for his first name, the operator said it was Zakharia but refused to state his last name.Challenged over his remarks over Israel, the operator told the caller: “I know the Jews went there, that Palestine received them and that there is a war between Israel and Palestine, of course.And the occupation... that’s what’s on the news.” Asked whether he would be able to help with the patients’ discharge regardless, the operator replied: “Yes, of course.”Michael Freilich, the editor- in-chief of Joods Actueel, said it “defies imagination” that a Belgian state employee would display the anti-Israel behavior that is commonplace in Arab countries.He called for punishing the operator instead of issuing the “standard apology.”A representative of the crisis center told Joods Actueel it deeply deplores the “isolated case” and will take “necessary actions” against the staffer in question, who the center said was not a civil servant but a call center employee.The recording’s release follows at least four recorded cases in which people who either spoke Arabic or wore Muslim traditional garb destroyed, concealed or removed Israeli flags at the impromptu memorial space set up for the attacks’ victims at Place de la Bourse in Brussels. It features many flags, including those of Arab countries and the Palestinian Authority.Reacting to the incident on Thursday, Forum of Jewish Organizations honorary president Eli Ringer told The Jerusalem Post that the Jewish community received the news of the “disturbing incident” with “shock and awe.”“That people who work in a governmental agency, moreover set up to help people in their most difficult times of distress, are expressing their own political views on Israel, or any other country for that matter, is inadmissible and offensive,” he said.“As soon as the forum was informed of the incident, early this morning, we have contacted the different authorities for their immediate action. According to the latest news the crisis center operator has been fired by the agency who employed him.”Such incidents point to a wider cultural issues, some said.“The existence of this virulent anti-Zionism within the structures of the Belgian bureaucracy shows fundamental flaws within the controls of the government or the lack thereof, which to some extent was the cause for the success of the terrorist attack in Brussels to begin with,” said Rabbi Pinchas Goldschmidt of the Conference of European Rabbis.In an email to the Post, Ken Jacobson, deputy national director of the Anti-Defamation League, stated, “One cannot know for sure from an incident like this whether that was only a biased, anti-Semitic individual working at the Crisis Center or reflecting policy. What would have happened if someone else answered?” Jacobson continued, however, that “the barrage of anti-Israel sentiments coming out of Belgium – whether in media, intellectuals or BDS – inevitably leads to this kind of offensive behavior in which Israel is too often treated like a pariah or as if it doesn’t exist. Considering the real evils spreading through the Middle East, this treatment of Israel can only be seen as the latest version of European anti-Semitism.”