Benjamin Hannam, 22, a probationary police constable with the London Metropolitan Police, is believed to be the first serving British officer to be convicted of a terrorism offence. 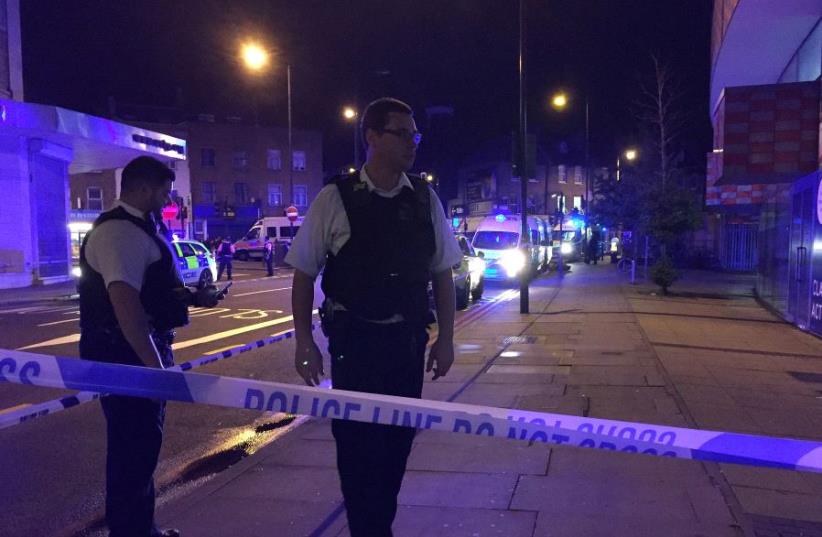 Police are seen near Finsbury Park as British police say there are casualties after reports of vehicle colliding with pedestrians in North London, Britain June 19, 2017
(photo credit: REUTERS)
Advertisement
A British police officer has been found guilty of being a member of a banned neo-Nazi group and possessing extremist material including the manifesto of Norwegian mass killer Anders Behring Breivik, the BBC said.

Benjamin Hannam, 22, a probationary police constable with the London Metropolitan Police, is believed to be the first serving British officer to be convicted of a terrorism offence.

He was found guilty of being a member of National Action, a far-right organization that was banned in 2016 after it praised the murder of Jo Cox, a female member of parliament who was killed in a frenzied street attack by a Nazi-obsessed loner.

It was the first far-right group to be outlawed in Britain since World War Two. In 2018 one of its members pleaded guilty to planning to murder another female lawmaker with a sword and making threats to kill a police officer.

Following a trial at London's Old Bailey court, Hannam was also convicted of lying on his police application forms, and possessing terrorism documents. Legal restrictions on the case were lifted on Thursday after he pleaded guilty to separate charges of possessing indecent images of a child, the BBC said.

Hannam, who faces a prison sentence and being dismissed from the police, will be sentenced on April 23.

Hannam's first known dealings with National Action came in early 2016 six months before it was outlawed, but he continued with his involvement in the group and its offshoot NS131 after the ban, Richard Smith, head of London's Counter Terrorism Command, told reporters.

Hannam lied about having any involvement with a far-right group on his application to join the Metropolitan Police, which he did in 2018.

Detectives discovered his involvement in February 2020 following the leak of a database of members of a far-right online forum, Iron March, in which he had posted under the name "Anglisc".

Hannam was arrested the following month at his home, where officers found a notebook referring to the far-right group, a guide on how to use knives and weapons, and the manifesto of Breivik, who killed 77 people in 2011 in Norway’s worst peacetime atrocity.

Smith said the public would be concerned that someone who was a member of a banned group had managed to become a police officer, but the force acted quickly once his background was known.

He said checks of cases Hannam had worked on had revealed nothing of concern, nor had his colleagues or any member of the public raised issues about his behavior.

Police said a review of the vetting process was currently underway with changes expected to be published soon.