A number of polls placed Corbyn in second place on the list last week; meanwhile reports of his long-standing “friendship” with Hamas and Hezbollah resurfaced. 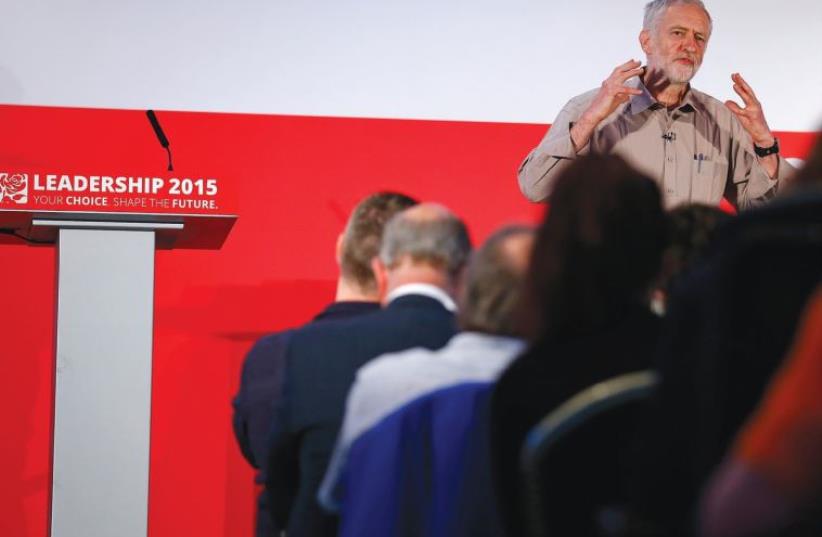 CANDIDATE JEREMY Corbyn speaks during a Labour Party leadership hustings event in Stevenage, Britain on June 20.
(photo credit: REUTERS)
Advertisement
LONDON – Former Labor Party leader Ed Miliband’s resignation following his trouncing in Britain’s general election in May opened something of a hornet’s nest within the party, with four would-be successors vying for the prospect of rebuilding a shattered movement that, only two decades ago, started a run of securing three large majorities and formed stable governments for 13 years.At first several candidates emerged, but they were whittled down to three serious individuals who will be up for internal party elections in September, two weeks before Labor’s annual conference. The early leader and current favorite is Andy Burnham, 45, a former Blairite who has slowly drifted to the Left. Currently serving as the shadow secretary of state for health, he previously held the same job in government. Although he has visited Israel, he now professes strong support for the Palestinians, and voted for early recognition of a Palestinian state last October.Yvette Cooper, 46, also a former minister, served briefly as the shadow foreign secretary, and visited Israel in that capacity. While strongly supportive of Israel’s right to defend itself, she is critical of its settlement policies, and signaled support for the growing calls within the EU to have West Bank products specifically labeled as such. She is currently the shadow home secretary, and has been very positive on issues surrounding anti-Semitism.Candidate Liz Kendall, 44, is something of an enigma. The flag bearer for the centrist part of the party, she entered politics more recently and is not as well-known as her competitors. Nor have her views on the Middle East really emerged, though she abstained at the end of the Labor-led nonbinding debate on recognition of a Palestinian state.It’s the fourth candidate, Jeremy Corbyn, a representative of the party’s far Left who struggled to pass the hurdle of 35 MP nominations required to enter the leadership race, who has recently gained most publicity and growing support from constituency parties. A number of polls placed him in second place on the list last week, and one claimed he had an unexpected lead.But his campaign was slightly derailed last week, when reports of his long-standing “friendship” with Hamas and Hezbollah resurfaced, leading to bitter exchanges with a Channel Four News presenter.The 66-year-old Corbyn, however, showed little concern when speaking to The Jerusalem Post last Wednesday, having been a pro-Palestinian MP since entering Parliament, specializing in delivering fierce and often very direct criticism of Israeli policies. One of the popular leaders of the Palestine Solidarity Campaign, his contribution to foreign affairs debates include diatribes about the behavior of Israeli troops or abuses of Palestinian human rights. Four years ago, he actively supported the right of Raed Salah, the leader of the Islamic Movement’s Northern Branch in Israel, to address meetings in Britain despite clear Home Office opposition. English courts accepted that Salah had previously invoked anti-Semitic blood libel, but arrangements to deport him fell apart. All four candidates are set to take questions from a Jewish audience at an event organized by Britain’s leading Jewish institutions on Monday night, and Corbyn told the Post that he is relishing the opportunity to explain his stance and show that sooner or later Israel will be obliged to talk to its enemies.