Diversity on Iran seen among Republican field in debate 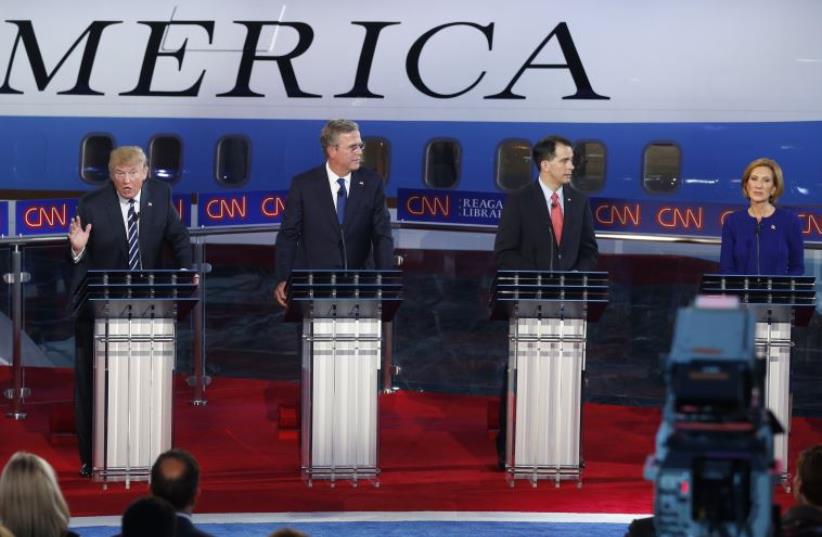 Various Republican US presidential candidates during the second official Republican presidential candidates debate of the 2016 campaign in Simi Valley, California
(photo credit: REUTERS)
Advertisement
WASHINGTON – Republican presidential contenders spent three hours on Wednesday night trying to distinguish themselves from one another in a debate hosted by CNN in Simi Valley, California. On Iran, the field succeeded as a whole by presenting a diversity of policy options to GOP primary voters.Only one candidate, Sen. Rand Paul of Kentucky, said he would withhold judgment of the deal until he sees whether Iran complies over time. Paul joins the field generally in opposition to the final form of Joint Comprehensive Plan of Action, negotiated between Iran, the US and five other world powers over the course of a two-year period.Several candidates have vowed to “shred” the JCPOA once entering the Oval Office, including Sen. Ted Cruz of Texas, Wisconsin Gov. Scott Walker and former Arkansas governor Mike Huckabee. All three candidates are registering single digits in national polls.Ohio Gov. John Kasich joined Paul, as well as former Florida governor Jeb Bush, in rejecting this approach. These three candidates say the deal was poorly crafted, but must be strictly policed in order to maintain international unity against Tehran in the event of non-compliance.Donald Trump, businessman and a leading contender for the GOP nomination, has also said that ripping up contracts – from his experience in the private sector – often proves difficult.But he said the deal was “incompetently” negotiated and that a new president would have to extract the US from its commitments, one way or another.Carly Fiorina, a former business executive and Senate hopeful, repeated a line she frequently uses on the campaign trail: That her first call as president would be to Prime Minister Benjamin Netanyahu, to reassure him of America’s commitment to Israel’s security.Her second, she said, would be to Iran’s supreme leader, Ayatollah Ali Khamenei, “to tell him that unless and until he opens every military and every nuclear facility to real, anytime, anywhere inspections by our people, not his, we, the United States of America, will make it as difficult as possible [to] move money around the global financial system.”Three candidates – Trump, Paul and neurosurgeon Ben Carson – touted their earlier opposition to the Iraq War, reflecting another major foreign policy dispute within the party.But Bush defended the record of his brother, former president George W. Bush, who led the war effort.“He kept us safe,” Bush said to applause. Trump had said his brother left the country in dire straits, and had invariably paved Obama’s rise to power.“Do you feel safer now?” Trump responded. “I don’t feel so safe.”Virtually every candidate on stage mentioned Israel, either in the context of expressing absolute support for its security or in an attempt to attack US President Barack Obama, who they view as hostile to the Jewish state.In an earlier debate for candidates polling below the top 11 presidential hopefuls, Sen. Lindsey Graham of South Carolina kept the group focused on foreign policy matters. He also harshly criticized the nuclear deal, but reminded the field of the procedural difficulties before Congress in killing it, and said that only a new president could remedy its flaws.With 11 candidates on stage for the main event, the debate ran over three hours, testing the stamina of the candidates.While much of the debate focused on foreign policy, CNN’s three moderators mostly focused on domestic affairs and the records and rhetoric of the candidates.And much of that, in the first hour, centered on Trump’s comments about other Republicans.In one exchange, Trump drew a sharp rebuke from Fiorina for his recent comment in an interview that voters might not back her because of her face.“I think women all over this country heard very clearly what Mr. Trump said,” Fiorina said. Her response was the most widely shared moment of the night on social media platforms.Trump leaned toward her and replied: “I think she’s got a beautiful face, and I think she’s a beautiful woman.”At one point, Fiorina, who has improved in the polls since the last debate, noted Trump’s companies had filed for bankruptcy four times and asked, “Why should we trust you?” Bush, a frequent target of Trump’s jibes for his “low-energy” campaign, criticized the billionaire for his past friendliness with Democrats and for trying to get involved in casino gambling in Florida.“He asked Florida to have casino gambling and we said no,” Bush said. Trump shrugged his shoulders dismissively and denied trying to get into the casino industry in Florida.“Wrong... Jeb, come on.”Trump added: “More energy tonight? I like that.”Bush, an establishment Republican, has been overshadowed by Trump’s bomb-throwing rhetoric but had promised to be more aggressive in the debate.Reuters contributed to this report.