By ASSOCIATED PRESS
JULY 5, 2010 11:31
hot dog champ arrested 311 AP
(photo credit: Associated Press)
Advertisement
NEW YORK — A Japanese eating champion who sat out this year's Coney Island Fourth of July hot dog contest apparently couldn't resist the temptation to show off anyway — and got arrested.Six-time champion Takeru Kobayashi was sitting in a jail cell Sunday after the annual Nathan's Famous International Hot Dog Eating Contest.Earlier in the day, Joey "Jaws" Chestnut gobbled his way to a fourth consecutive championship. But he was suddenly upstaged by the surprise appearance of his biggest rival, Kobayashi, who crashed the eating platform after Chestnut's win and wrestled with police."Let him eat! Let him eat!" the crowd chanted as officers handcuffed the world's No. 3 professional eater, dubbed "The Tsunami." 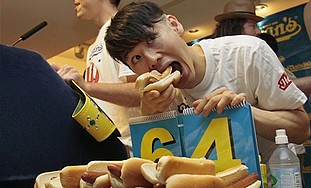 Six-time hot dog eating contest champion Takeru Kobayashi.The 32-year-old Kobayashi did not compete this year because he refused to sign a contract with Major League Eating. On his Japanese-language blog, he said he wanted to be free to enter contests sanctioned by other groups.But a few days ago, he told Japan's Kyodo News: "I really want to compete in the (Coney Island) event."Wearing a black T-shirt that said "Free Kobi," Kobayashi mingled with the crowd, standing inside a police-barricaded pen just under the stage. When the eating ended, he slipped up the stage stairs.Then, several security officers appeared and tried to usher him off. He grabbed a metal police barricade with both hands, clutching it tightly as the officers pulled at him. Finally, they dragged him down the stairs, with Kobayashi resisting vehemently.He was expected to spend the night in jail awaiting an appearance in Brooklyn Criminal Court on charges of resisting arrest, trespassing and obstructing governmental administration."There's a contract dispute, so they weren't giving him his freedom," said Kobayashi's interpreter and publicist, Maggie James.She said he had hoped the Coney Island crowd would recognize him and he could offer them an eating demonstration "for free. But nobody knew he'd jump onstage."Minutes earlier, Chestnut downed 54 hot dogs in 10 minutes to win the contest televised live on ESPN.The runner-up was Tim "Eater X" Janus, with a total of 45. Patrick "Deep Dish" Bertoletti came in third with 37 dogs.Chestnut was disappointed with his performance, despite claiming the bejeweled, mustard-yellow belt plus a $20,000 purse. The 26-year-old from San Jose, Calif., was aiming for a record 70 dogs in 10 minutes."I was dehydrated going in," he told The Associated Press, explaining that he did not drink enough liquids the day before because he was striving for an emptier stomach.After witnessing the drama involving Kobayashi, Chestnut said, "I feel bad for him."Still, the Fourth on Coney Island paid tribute to two of America's biggest loves: hot dogs and competition.The two pastimes merged by the Brooklyn boardwalk, with a crowd of thousands squeezed elbow-to-elbow on a sweltering afternoon, with temperatures around 90 degrees (32 Celsius).Eight-year-old Stephen Pearce found his own way of keeping cool: with ice cubes melting atop his head. "It feels good."He said something else was "cool" as he watched Chestnut: "I could never eat that many hot dogs! It's gross," said the boy from Chappaqua, N.Y.Americans enjoy 150 million hot dogs each July 4 — "enough to stretch from D.C. to L.A. more than five times," said Janet "Queen of Wien" Riley, president of the National Hot Dog & Sausage Council.

Last year, Chestnut ate 68 dogs against Kobayashi's 64. That's about as many as the average American eats in a year — 60, according to the council.Coney Island is said to be the birthplace of fast food.The first hot dog was sold here around 1870 by German butcher Charles Feltman. His competitive, Polish-born employee, Nathan Handwerker, opened his own business in 1916 — Nathan's Famous, still the backdrop to the contest started here that year.According to local lore, immigrants arguing about who was most patriotic settled their dispute by testing who could eat more franks. Irishman Jim Mullen won with 13.After watching the stomach-churning feast, some of the tens of thousands of spectators could have used Pepto-Bismol — a new 2010 sponsor — before they joined the demolition-derby crowd of sticky bodies bumping their way through Surf Avenue.And it wasn't over till the "Tsunami" hit Coney Island — just not quite the way anyone expected."He's fighting for his freedom — on Independence Day!" declared James, the interpreter-publicist.As a handcuffed Kobayashi was led from Brooklyn's 60th Precinct to a waiting cruiser that took him to jail, one Coney Island resident shouted: "You've got to be kidding! They locked him up?"Others yelled, "Free Kobi!"
Advertisement
Subscribe for our daily newsletter