While sales in shops fell by a staggering 48%, online sales skyrocketed by 95%. 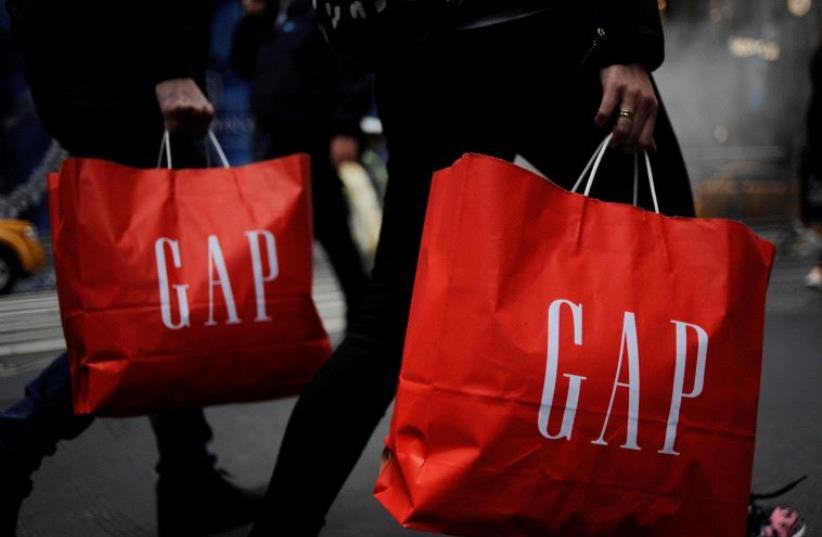 Shoppers carry bags from a Gap store [Illustrative]
(photo credit: REUTERS)
Advertisement
As the coronavirus pandemic broke out, many clothing companies whose stores were deemed nonessential turned to face masks as a new source of income. Several months later, that move paid off for American clothing and accessories retailer Gap Inc., which reported on Thursday that it had earned $130 million in face mask sales alone, according to international media. The pandemic caused a great economic blow to businesses across the globe. Small businesses and big conglomerates alike were impacted by the lockdowns that attempted to prevent the spread of the virus, and subsequently lead to a severe economic crisis.But some companies were swift enough to recognize the new demand that the pandemic created and actually managed to use it to their advantage by selling face coverings.Gap Inc., which owns several brands including Banana Republic, Old Navy and Athleta, was one of those companies. Its reported $130 million in revenue includes sales both to consumers, cities, states and businesses, including the New York City, California and Kaiser Permanente. During the quarter that ended on August 1, Gap’s total sales fell about 18% short from last year's $4 billion, amounting to $3.28 billion. While it may sound like a dramatic loss, it is actually much lower than previous estimates that expected total sales to drop to $2.91 billion.While sales in shops fell by a staggering 48%, online sales skyrocketed by 95%.   "Our strong performance in the second quarter reflects the customer response to our brands, products and experiences, particularly as we’ve rapidly adapted to the changing environment," CEO Sonia Syngal said in a statement. "I'm confident that our purpose driven lifestyle brands, size and scale, and advantaged digital capabilities are helping us win now and position us for growth in the future," she added. Each of Gap’s brands currently has its own masks available in stores and online, in various patterns and colors. Early on in the pandemic, face masks were in short supply, but as mask mandates became more common, demand grew and companies stepped up to supply consumers with what they wanted.Syngal said that today, Gap Inc. ranks first in the "facemask style guide" in Google search results, and with some 3.5 million new customers online, the company has proved that it managed to identify an opportunity early on and to effectively position itself within the new and growing market.