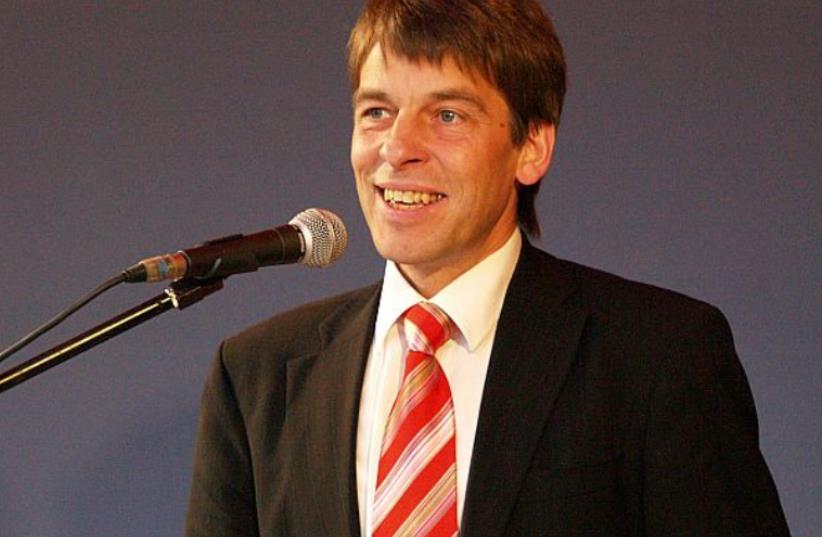 Albrecht Schröter
(photo credit: ROBERT CONRAD/WIKIMEDIA COMMONS)
Advertisement
BERLIN – The Social Democratic mayor of Jena, Albrecht Schröter, on Friday accused Israel of partial responsibility for the Syrian refugee crisis and called on Germany’s foreign minister to “show less restraint” toward the Jewish state.“The Social Democratic Party must reject Schröter’s absurd statement!” Green Party deputy Volker Beck said.“Drawing a connection between Israel and the refugees and the civil war in Syria and Iraq is absurd. That only gives meaning to people who believe that Israel is to blame for all the world’s evil,” Beck, who is head of the German-Israel parliamentary group in the Bundestag, said.Josephine Petzold, from Jusos Jena, an organization for young members of the Social Democratic Party in the eastern German city, took Schröter to task. “Jusos Jena is outraged by the statements of Jena Mayor Albrecht Schröter regarding the German-Israel relationship. Schröter’s naïve assessment turns the humanitarian catastrophe in Syria into the absurd,” she said.Jusos Jena said in a statement on Friday, “Schröter unwittingly contributes to making anti-Semitism respectable in society.”Schröter told the Thüringische Landeszeitung newspaper, in connection to the Syrian refugee crisis: “The US policy of hostility toward Islam bears its fruits.” He called on his party and its Foreign Minister Frank-Walter Steinmeier “to change the role of Germany in the Middle East conflict. Germany must break with restraint toward Israel as an occupying state.”Nathan Gelbart, a prominent Berlin lawyer and chairman of the German branch of Keren Hayesod-United Israel Appeal, told The Jerusalem Post from Israel, “While respectable mayors deal with municipal policies and traffic lights, Schröter does foreign policy. He is fantasizing, from shifting blame to the US, to an alleged German restraint toward Israel’s occupation policy. Of course, Germany can end Israel’s occupation of the West Bank. It must send German armed forces to relieve Israel’s protection of [Mahmoud] Abbas and prevent the takeover of the West Bank by Hamas." The otherwise obscure mayor in Jena, a university town with nearly 110,000 residents, caused controversy in 2012 when he urged a sweeping boycott of Israeli products. He joined the anti-Israel Pax Christi Catholic aid organization in a petition calling for goods from Israel to be boycotted. Kevin Zdiara, the then–deputy representative of the German-Israel Friendship Society in Erfurt, the capital of Thuringia state, where Jena is located, said Schröter’s action recalled the Nazi slogan: “Don’t buy from Jews!”

The Post sent a press query to Schröter seeking a comment.In 2012, Schröter said, “I firmly reject the malicious accusation of anti-Semitism against me.”
Advertisement
Subscribe for our daily newsletter