The UNFPA estimated that some 1.5 million women and girls in Yemen will be unable to access health and protection services, as needs for these resources grow. 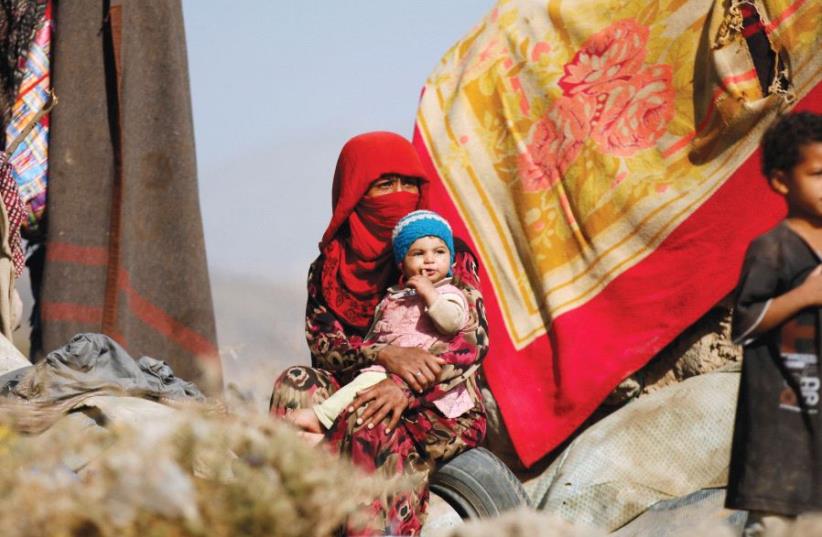 A WOMAN sits with her children near their tent at a camp for internally displaced people in Dharawan, near the Yemenite capital of Sanaa.
(photo credit: REUTERS)
Advertisement

As world representatives gathered for an event on Yemen at the United Nations General Assembly on Thursday, the United Nations Population Fund (UNFPA) - the UN sexual and reproductive health agency - called for action to end the suffering of Yemeni women and girls and to promote their safety, health and rights.

About 73% of some 4 million Yemenis displaced in the country's civil war are women and children, with almost one in three displaced families headed by women. UNFPA estimates some 1.5 million women and girls in Yemen will be unable to access health and protection services, as needs for these resources grow.

Over 6 million women are already in need of protection, and 5 million women and adolescent girls able to bear children have little or no access to reproductive services, with one woman dying in childbirth every two hours from preventable causes. More than one million pregnant and nursing women are severely malnourished and another million may become so if access to food continues to diminish as humanitarian aid to Yemen dries up, according to UNFPA.

“The women of Yemen deserve peace and protection," said UNFPA Executive Director Dr. Natalia Kanem.  "Their lives are under threat and the services they desperately rely on to survive are underfunded. UNFPA calls on governments and partners to stand with Yemeni women and girls in their time of need by funding life-saving services to protect their reproductive health and to prevent and respond to gender-based violence,” she added.

Step right up and see a new way of cooking. Women from the Nasna Foundation show off their wares in Sanaa, Yemen, during a bazaar organized by the Yemeni Women’s Union for International Women's Day in 2019 (credit: NASNA FOUNDATION)

“We not only need more funding to sustain services, but we urgently need to scale up services to save the lives of women and girls," UNFPA Representative in Yemen Nestor Owomuhangi added. "If we collectively fail to do so, women and girls will die."

UNFPA has received 41 percent of the funding it needs to deliver such services, but it needs another $59 million to continue meeting Yemeni women and girls' needs until the end of 2021.