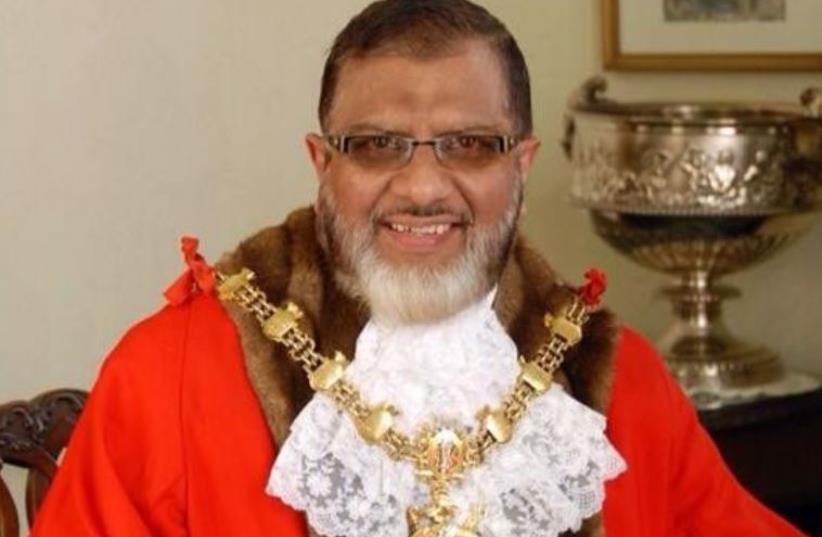 Former Blackburn mayor Salim Mulla
(photo credit: FACEBOOK)
Advertisement
Another three Labor Party members were suspended Monday after posting anti-Israel messages on social media, continuing a rash of damning revelations that has placed Jeremy Corbyn’s movement under scrutiny for widespread anti-Semitism.The British party suspended city councilman Ilyas Aziz on Monday after a British political watchdog produced Facebook posts in which he said Israel should have been created in the United States and it was not too late to move Israeli Jews there. Hours later it suspended a second city councilman for anti-Israel posts.Aziz, a lawmaker in Nottingham in north-central England, was suspended hours after the Guido Fawkes website posted screenshots of his Facebook posts, including the one in July 2014 during the Israel-Hamas war calling for the relocation of Israeli Jews.Other of Aziz’s posts shown on Guido Fawkes included one comparing Israel’s treatment of the Palestinians to the Nazis’ treatment of Jews, and another perpetuating the blood libel myth that reads “Stop drinking Gaza’s blood.”Another post shows an Israeli flag with the words “God didn’t give you the land – the UK did… Illegally” superimposed on it.Later on Monday, the former mayor of Blackburn in Lancashire, Salim Mulla, was suspended less than an hour after his anti-Israel posts were outed, also by Guido Fawkes.Mulla, whose Twitter profile reports he was born in India, charged in an August 2015 Facebook post that Israel is behind ISIS. A month earlier he posted a conspiracy theory."
video blaming Israel for the Sandy Hook elementary school murders in Connecticut, adding his own comment that “He is talking facts.” A June 2015 post stated ”Zionist Jews are a disgrace to humanity.”Mulla told Guido Fawkes that “I don’t agree with Zionism at all. I have very, very many Jewish friends.”The third low-level party member, Burnley Labor councilor Shah Hussain, was suspended Monday pending investigation into anti-Israel tweets made in 2014.The tweets in question, made in July 2014 during Israel’s war in the Gaza Strip, were directed at Israeli soccer player Yossi Benayoun.Hussain called Benayoun, who played soccer in the UK, a “complete and utter plonker” and said he and Israel were “doing the same thing that hitler [sic] did to ur race in ww2.”The suspensions come days after Labor suspended parliamentarian Naz Shah for a 2014 Facebook post calling for relocating the State of Israel to the United States.On Thursday, the party suspended former London mayor Ken Livingstone for saying that Adolf Hitler was a Zionist for advocating in 1932 a policy of moving Europe’s Jews to Israel.The following day, Labor said it would launch an investigation into anti-Semitism in the party. Labor Party leader Jeremy Corbyn also said in a statement that he would propose a new party code of conduct, that would “make explicitly clear for the first time that Labor will not tolerate any form of racism, including anti-Semitism, in the party.”The latest suspension comes days before local elections, including for mayor of London, in a race that Labor’s candidate, Sadiq Khan, is favored to win, which would make him the first Muslim mayor of a major Western city. Khan, who is running against Conservative Party candidate Zac Goldsmith, is part of a growing chorus of Labor politicians calling for Livingstone’s expulsion.Corbyn, a harsh critic of Israel who has called Hezbollah and Hamas activists “friends,” has been criticized for not doing enough to curb the rising anti-Semitic rhetoric in his party.MK Merav Michaeli (Zionist Union) responded Sunday to Livingstone’s comments while taking part in New York Reform synagogue Temple Emanu-El’s Holocaust Martyrs and Heroes Remembrance Day ceremony.“There will always be those who will try to downgrade the tragedy and atrocity of the Holocaust. There will always be those who will try to abuse it for political needs, as Ken Livingstone painfully reminded us this week,” she said.However, Michaeli added: “That doesn’t make Israel a victim.It means that Israel must be even more committed to fighting hate and racism, and accepting others.”MK Itzik Shmuly, also of Zionist Union, commented on the recent suspensions of Labor MPs, saying: “At this rate, British Labor won’t have any members left.“Maybe, instead of taking care of the symptoms and suspending one member after another, the time has come to deal with the anti-Israel plague that spread on Corbyn’s watch,” Shmuly suggested. “We shouldn’t be confused. Although they say they care about human rights, they don’t want to promote peace. They want to erase Israel from the map.”MK Nachman Shai (Zionist Union) called for Labor to cut ties with its British counterpart, saying it is no longer an ally.“Corbyn must ensure anti-Semitic statements will no longer be sounded from his party,” Shai said
Advertisement
Subscribe for our daily newsletter