Life under the knife

We get used to anything, but that may be part of our problem. 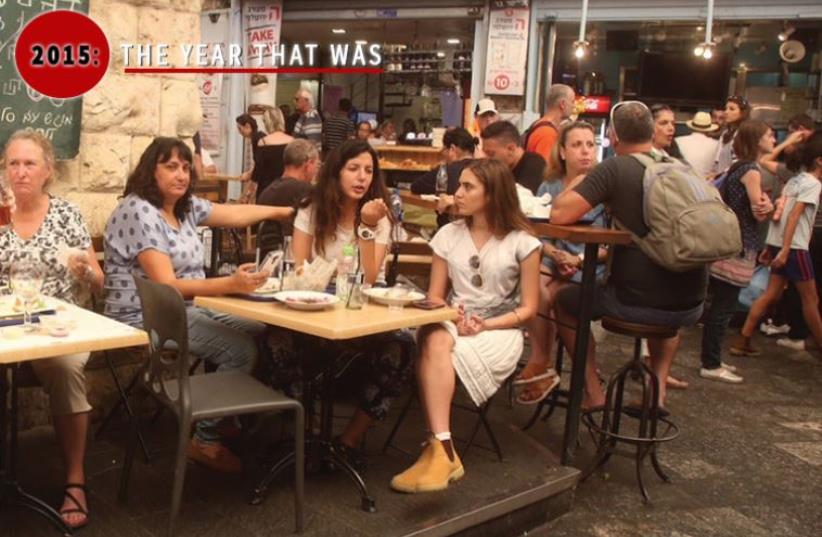 Jerusalem restaurants
(photo credit: MARC ISRAEL SELLEM/THE JERUSALEM POST,JPOST STAFF)
Advertisement
Say what you want about us Israelis, but we’re a resilient bunch.Run us down at bus stops? We put up huge cinder blocks.Stab us on the street? We get pepper spray and take self-defense classes.Threaten our way of life? We say “Go ahead and try” and head out to eat hummus.2015 proved to be more trying than most years, even after a harrowing 2014 when a good part of the country was under siege for weeks from Hamas-launched rockets during Operation Protective Edge.Click here for more stories from the "2015 - The Year That Was" Jpost specialAround Rosh Hashana time this year, the big stories were already shaping up to be daunting enough.The Knesset and prime ministerial elections in March saw Prime Minister Benjamin Netanyahu emerge with one of the most right-wing coalitions in the country’s history, the battle between Netanyahu and President Barack Obama over the Iranian nuclear deal threatened the close Israel-US alliance and the rise of Islamic State threatened the entire world.Any of those game-changing events would have been contenders to capture the essence of 2015, but they all ended up taking a back seat to the phenomenon that has gripped the country for the last three months. Call it the knife intifada, the stabbing intifada, the Internet intifada or even the third intifada – the rash of stabbings, drive-by shootings and car rammings by supposed “lone wolf” terrorists that have targeted and killed random Israelis in Jerusalem, Tel Aviv, Gush Etzion, Beersheba and points between has ostensibly shaped how we historically will view 2015.From the horrific slaying of Eitam and Naama Henkin in their car in front of their children to the Beersheba Central Bus Station horror, in which two people were killed (including an Eritrean migrant mistaken for a terrorist who was beaten to death by bystanders) and 11 were injured, to the bus attack in Jerusalem’s east Talpiot neighborhood which left three dead and 16 wounded, October and November exposed a beleaguered nation under siege.Although the fatalities didn’t mount with the same alacrity as the suicide bus bombings of the second intifada of the early 2000s, what October and November shared with that dark period in Israeli history was a similar mood – one that mixed fear, anger and desperation.This time around, though – knowing what came before – there was an added dimension of, “Here we go again, how bad is this one going to get?” But after a brief period in which the outdoor markets were ghost towns, restaurants empty and the streets devoid of pedestrians after sunset, there was a behavioral adjustment as the realization hit that this wasn’t ending anytime soon. The streets, cafes and markets filled up again as the country emerged from its shellshock – albeit with a heightened sense of alertness accompanied by a little flavor of the Wild West.The terrorists were still terrorizing, but were efficiently being mowed down by security forces and civilians alike. The term “neutralized” entered the everyday vernacular, and for most Israelis, it didn’t really matter whether that sterile term meant being captured or killed. It only meant that there was one less Jihadi out there.As October made way to November and December, the attacks began to become more centralized in the West Bank, and for most Israelis, that meant that this intifada was over. But of course it wasn’t – and it isn’t.As much as a certain segment of the population would like to see it reduced to a West Bank thing, there’s always a Palestinian terrorist to remind us that it’s not.It appeared that the frequency of attacks was beginning to dissipate slightly this month. Then along came an attack like the one in the middle of month, in the middle of the country. When a terrorist runs amok in a suburban – inside-the-Green Line – Pleasantville like Ra’anana, wounding three and prompting a 46-yearold woman to take on the role of a hero and push an attacker out of her home, you know that we’re not out of the woods yet. Since then, not a day has gone by without more terror at our doorsteps, no matter where we call home.If one thing has been demonstrated throughout the existence of Israel and all the obstacles, enemies and wars it’s faced is that Israelis can get used to anything – gas masks in sealed rooms, security barriers and checkpoints, guards at schools and restaurants... and now knifings on the sidewalks.We get used to anything, but that may be part of our problem. Adapting to the ‘new normal’ may prove that we’re resilient, but the demand and the desire to fix the underlying problem evaporates. And though the mystics and statistics might indicate that this intifada is going to fizzle out, what will replace it? 2016 is just around the corner with its own surprises.Without doubt, Israel will continue to pull out its own inventive bag of tricks to deal with any and all of those surprises. Let’s hope that one day we don’t reach deep down into the bag and find it empty.