By GIL STERN STERN SHEFLER, JPOST.COM STAFF
French police in Toulouse (night)_370
(photo credit: Jean-Paul Pelissier/Reuters)
Advertisement
France and the US vowed on Wednesday to combat "terrorist barbarism," after US President Barack Obama called Sarkozy to offer condolences for a series of shooting that left seven people dead, including three children.According to a French presidential statement, Obama called Sarkozy to offer "personal condolences" on his behalf, and on behalf of US citizens."France and the United States are more determined than ever to fight together against terrorist barbarism," the statement said.Darkness had fallen on the southern French city of Toulouse on Wednesday as police continued to hole up the suspect believed to have been behind the brutal killings at the Ozar Hatorah Jewish school on Monday. Streetlights were off as at least 300 French officers kept Mohamed Merah, a French national with ties to al-Qaida, surrounded while the siege entered its 21st hour.Earlier in the day three members of the French security forces were wounded when the suspect opened fire at them.Meanwhile, new information on Merah seemed to point toward a failure on the part of French security forces for not apprehending him sooner.The 24-year-old of North African descent was on a list complied by French security forces of people known to have ties to Islamist group. He is said to have traveled to Pakistan and Afghanistan.But French Foreign Minister Alain Juppe speaking at press conference in Jaffa dismissed criticism that his security forces may have blundered by not tracking down Merah earlier."It's true that there are lists of people who may be suspect in such events because of their ties to terror groups," Juppe said through a translator. "However, the link between this man and the attacks... that link was made only on Monday night and could have been made only after the attack." 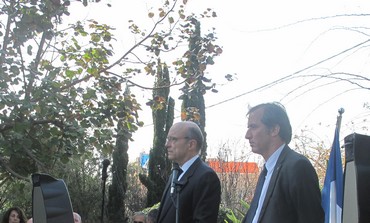 The first shooting in the series of slayings in and around Toulouse believed to have been carried out by Merah took place on March 11 when a French soldier was found shot dead behind a local school. A similar shooting occurred last Thursday when two other French soldiers were shot dead at a shopping mall in Montauban, some 50 kilometers north of Toulouse.Police tests revealed the same gun was used in both cases to kill French soldiers, but if Merah was a suspect in the shootings they did not apprehend him.The third shooting using the same gun took place at Ozar Hatorah on Monday morning. Four victims -a teach, his two children and another child- were shot by the gunman from close range before the person fled on a black motorcycle.Police raided Merah's house early Wednesday morning but were beat back when the suspect opened fire at them. He later boasted he had carried out the attacks saying he targeted Jews to avenge the deaths of Palestinians.
Advertisement
Subscribe for our daily newsletter