Eighty percent of the cases were those of Jews, the most prosecuted minority in the Inquisition. 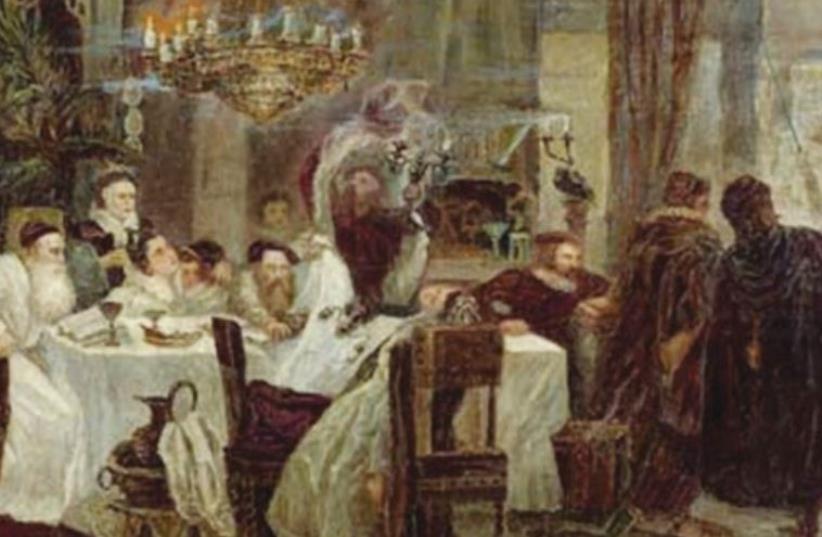 A painting by Moshe Maimon of a Passover Seder held by Marranos, or secret Jews, in Spain during the time of the Inquisition
(photo credit: Wikimedia Commons)
Advertisement
The Portuguese Parliament approved this month a petition to create a memorial for the victims of the Inquisition. The memorial will be built in front of Lisbon's National Theatre, where the city's Inquisition tribunal was located. May 23rd was named the Memorial Day for the Victims of the Inquisition.The tribunals were responsible for organizing the auto-da-fe, public penance rituals for those considered heretics by church inquisitors. It was responsible for the deportation, sentencing and death of hundreds of Jews.In the "Petition against Forgetfulness" sent to the Portuguese Parliament in March, historian and author of Jewish and Inquisition works Jorge E.D.C. Martins said that it is necessary for the government to admit errors committed in the past. "An important step is lacking for acknowledging the harmful consequences, for the Portuguese and inhabitants of Portugal's former colonies, of the establishment of the Inquisition on May 23, 1536, which legally stayed in place for 285 years longer," the petition read. The Portuguese Inquisition was established following the marriage of Portuguese king Manuel I and the Spanish princess Maria of Aragon, and came on the heels of Spain's better-known Inquisition. The goal of the Portuguese Inquisition was to root out those known as "conversos" or "marranos," Jews who had converted to Catholicism but were suspected of secretly practicing their former religion. Some 45,000 trials took place at the Inquisition tribunals, according to the petition."If we multiply this number by their relatives and descendants, that were socially, culturally, economically and religiously discriminated against," an astounding number of people throughout history were affected by the Inquisition, according to the petition.Eighty percent of the cases were against Jews, the most prosecuted minority in the Inquisition. "Besides the loss of scientific knowledge, cultural virtue and professional activities, areas in which [Portuguese Jews] were at the forefront," Martins wrote in the petition, "Portugal was affected by a life dominated by fear."