On April 7 last year, Akilov hijacked a beer truck outside a restaurant in central Stockholm and plowed down shoppers. 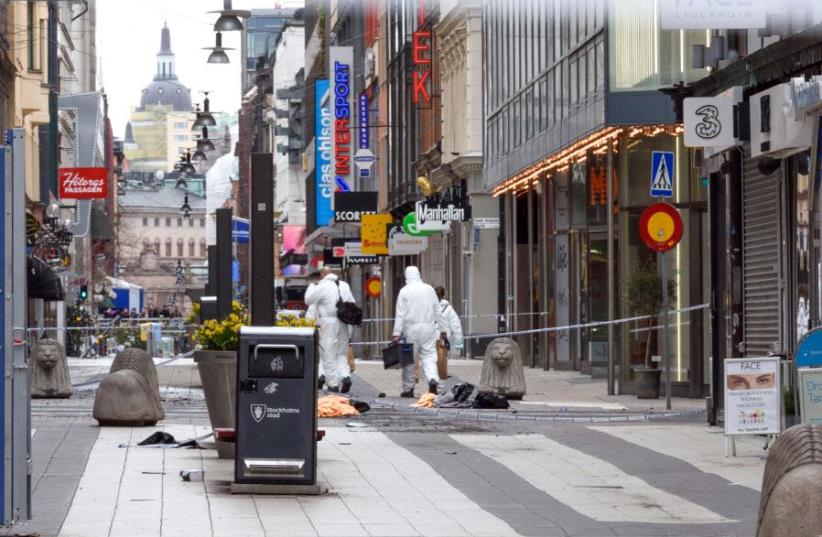 Forensic specialists walk to the crime scene in central Stockholm April 8, 2017, the day after a hijacked beer truck plowed into pedestrians.
(photo credit: REUTERS/STRINGER)
Advertisement
STOCKHOLM - The man who mowed down pedestrians with a truck, killing five people, in Stockholm last April wanted to punish Sweden for its part in the global fight against radical group Islamic State, prosecutors said in charges filed on Tuesday.Uzbek-born Rakhmat Akilov, who was on the run from Swedish authorities after his asylum application was turned down, said in online conversations cited by the prosecutor that he wanted to "run over unbelievers.""His motive is that he wanted to punish Sweden because we are part of the global coalition against IS," Deputy Chief Prosecutor Hans Ihrman of the National Security Unit told a news conference.Akilov's lawyer Jonas Eriksson said his client admitted to the charge of committing a terrorist act and confirmed the motive. He declined to say whether Akilov had expressed regret for the attack.On April 7 last year, Akilov hijacked a beer truck outside a restaurant in central Stockholm and sped some 500 meters (yards) down a pedestrian street, plowing into shoppers before crashing the truck into a department store.Bloodied and with burns to his clothes after attempting to set off a home-made bomb, Akilov fled into a nearby subway station, leaving three dead -- including an 11 year old girl -- and a dozen injured. Two of the victims died later in hospital.He was arrested the same day outside a gas station in a Stockholm suburb after he was recognized from a CCTV picture.According to Ihrman, Akilov had planned his attack for months and had investigated a number of possible targets, including gay clubs and ferries.Akilov had asked in online conversations for practical advice on building a bomb and for spiritual guidance ahead of a "martyr operation," the charges filed with a Stockholm court alleged.Ihrman said Akilov had pledged allegiance to Islamic State, and had tried unsuccessfully to get to Syria, but it was not clear whether he had been directly instructed to carry out his attack.Sweden has not fought in a war in more than 200 years and is not part of NATO, but has taken part in international peacekeeping missions in places like Mali, Afghanistan, Iraq and Kosovo.It has also sent 70 instructors to aid Iraqi forces in their fight against IS as part of a US-led operation.The trial is due to begin next month.