Harvey became a Category 3 hurricane on Friday, the National Hurricane Center said, the third most powerful on the Saffir-Simpson scale.

By REUTERS
AUGUST 25, 2017 22:22
Hurricane Harvey is seen approaching the Texas Gulf Coast, U.S.,in this NOAA GOES East satellite image taken at 7:07 ET (11:37 GMT) August 25, 2017
(photo credit: NOAA/HANDOUT VIA REUTERS)
Advertisement
CORPUS CHRISTI, Texas - Businesses closed and lines of cars streamed out of coastal Texas as officials called for residents to evacuate ahead of Hurricane Harvey, expected to arrive about midnight as the most powerful storm to hit the US mainland in more than a decade.The hurricane is forecast to slam first near Corpus Christi, Texas, drop flooding rains along the central Texas coast and potentially loop back over the Gulf of Mexico before hitting Houston, some tracking models showed."My urgent message to my fellow Texans is that if you live in a region where evacuation has been ordered, you need to heed that advice and get out of harm's way while you can," Texas Gov. Greg Abbott said in a televised address.The storm has so far shutdown 22 percent, or 377,000 barrels per day (bpd) of Gulf of Mexico oil production, the US reported Friday afternoon, and halted 4.4 percent of U.S. refinery output. Some inland shale oil producers ceased operations as a precaution against expected flooding.Gas stations and grocery stores in the region were packed as residents readied their cars and pantries for any shortages following the storm. Coldplay, the British rock band, canceled a Friday concert in Houston, telling fans it didn't want to risk anyone's safety. 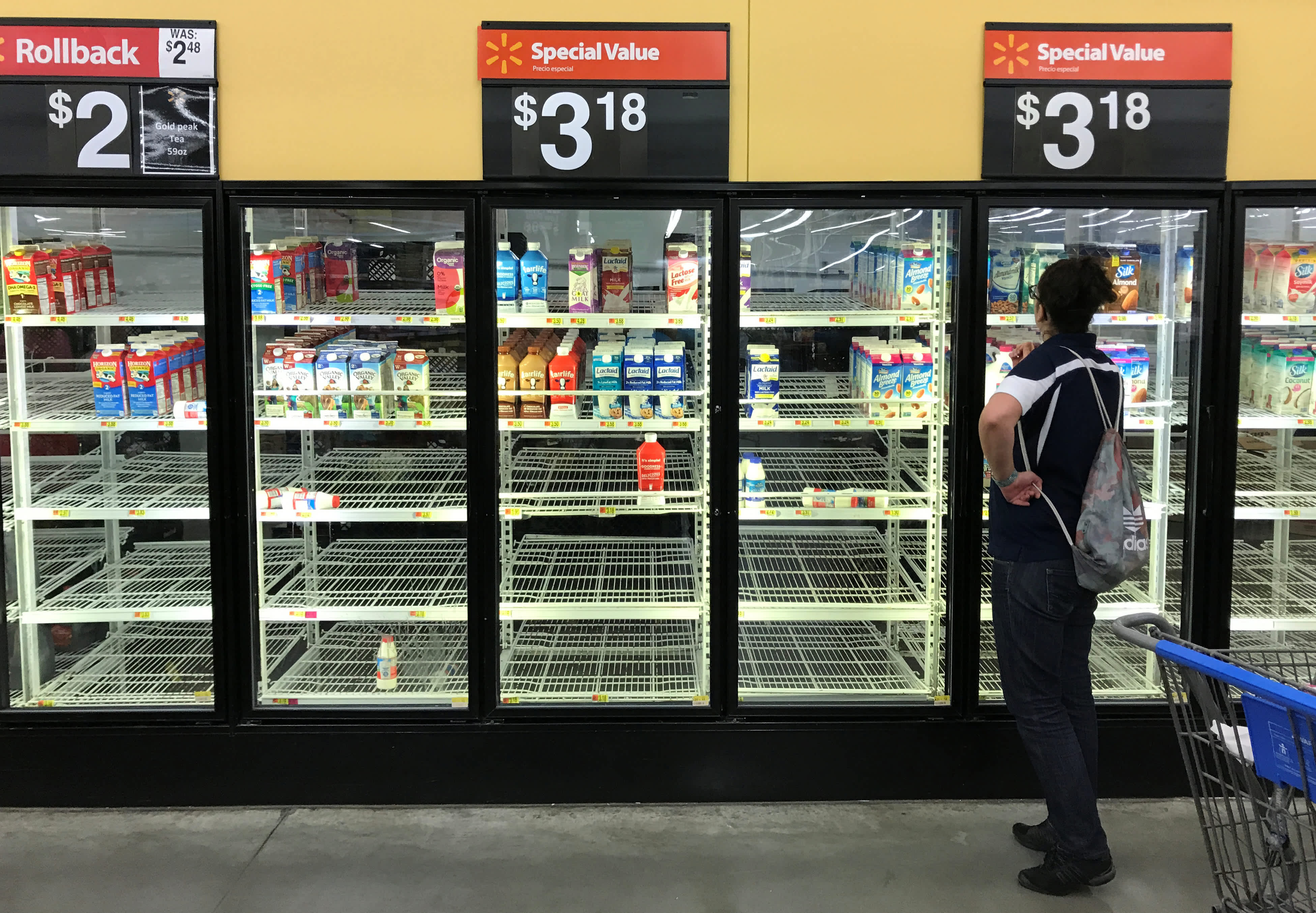 A woman looks over bare refrigerator shelves in a Walmart store in Houston, Texas, US, as Hurricane Harvey approaches landfall near the Texas coastal area, August 25, 2017.At a Willis, Texas, station, about 50 miles (77 km) north of Houston, Corey Martinez, 40, was heading to Dallas from his Corpus Christi home."It has been pretty stressful. We're just trying to get ahead of the storm," he said. "We've never been through a hurricane before."Harvey became a Category 3 hurricane on Friday, the National Hurricane Center said, the third most powerful on the Saffir-Simpson scale with winds of 111-129 mile per hour (178-208 km/h) that can uproot trees, damage homes and disrupt utilities for days. That would make it the first major hurricane to hit the mainland United States since Hurricane Wilma struck Florida in 2005.The storm was about 85 miles (140 km) off Corpus Christi and packing winds of 110 mph in early afternoon on Friday, the NHC said. It projected windspeeds could reach 120 mph just before landfall.The NHC's latest tracking model shows the storm sitting southwest of Houston for more than a day, giving the nation's fourth most populous city a double dose of rain and wind."Now is the time to urgently hide from the wind. Failure to adequately shelter may result in serious injury, loss of life, or immense human suffering," the National Weather Service said.Up to 35 inches (97 cm) of rain are expected over parts of Texas, and sea levels may surge as high as 12 feet (3.7 meters). Louisiana could get 10 to 15 inches of rain. Flood warnings are in effect for Louisiana and northern Mexico."Life-threatening and devastating flooding expected near the coast due to heavy rainfall and storm surge," the NHC said.The storm's approach triggered evacuations in south Texas communities and central coast residents were voluntarily leaving the area. Cities canceled classes on Friday and Monday at dozens of schools along the south Texas coast, home to 5.8 million people from Corpus Christi to Galveston.David Ramirez left his home in Corpus Christi early on Friday to wait out the storm in San Antonio, Texas."With the level of storm surge they're talking about, there isn't a lot I could do to protect my house," he said in an interview while awaiting directions to an emergency shelter.Harvey also forced the cancellation or delay of at least 40 flights in and out of major airports in Texas on Friday, according to Flightaware.com, which tracks airline traffic.Louisiana and Texas declared states of disaster, authorizing the use of state resources to prepare. President Donald Trump has been briefed and is ready to provide resources if needed, the White House said on Thursday.The port of Houston, the nation's busiest petrochemical port, closed its terminals at noon, and earlier halted inbound and outbound ship traffic on Friday. The city of Houston warned residents of flooding from close to 20 inches of rain over several days.