Rivlin: Israel is a 'confederation of minorities’ that needs better integration

“Jerusalem,” he said, “is a microcosm of our ability to live together.” 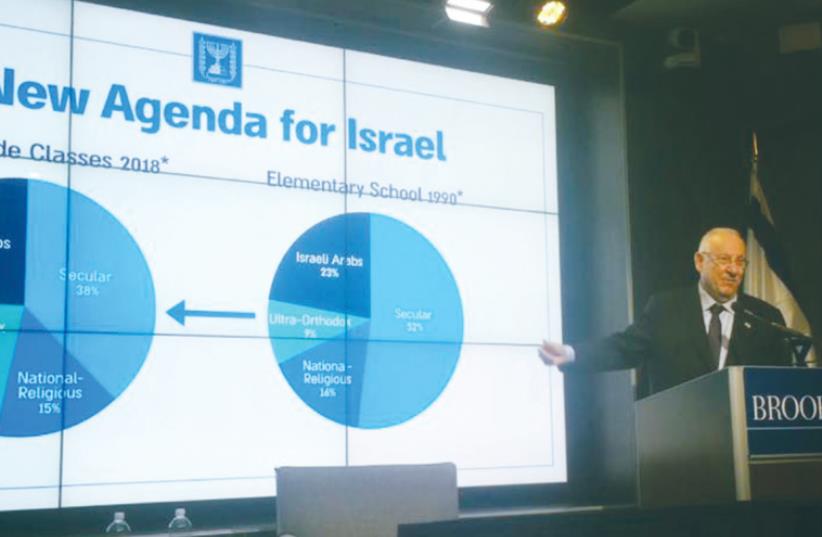 PRESIDENT REUVEN RIVLIN speaks Thursday at the Brookings Institution in Washington on the ‘New Israeli Agenda.’
(photo credit: FACEBOOK)
Advertisement
WASHINGTON – Israel has evolved from a nation ruled by a slim majority of secular Jews to one equally shared by ultra-Orthodox, Zionist-nationalists and Israeli Arabs – a “confederation of minorities,” President Reuven Rivlin told a Washington think tank on Thursday.Speaking at the Brookings Institution, the Israeli head of state said his country has thus far failed to integrate these “tribes” – a term he used to describe the four demographic camps. He renewed a call for Israelis to learn Arabic in schools and, generally, for a more integrated education system, under which all four groups would study the same curriculum.The speech, in the form of a presentation with a graphic video opening and a forum discussion at its conclusion, largely echoed an address Rivlin delivered to the Herzliya Conference in June of this year. In both speeches, the president called for a government- led effort to construct a national identity that could unite all four groups.He acknowledged that one of these groups – Israeli Arabs – have fundamental concerns with the codification of Israel’s character as a Jewish state.But he added: “We are not going to give up on the idea that Israel exist as a Jewish state.”In a column published in The Washington Post on the day of his arrival in the US, Rivlin acknowledged the lack of a path toward peace with the Palestinians. He expounded on that frustration in his speech on Thursday, noting that Israelis, on a basic level, do not trust the Palestinians; And that the Palestinians, “from time to time,” reject the very idea of Israel’s existence.Rivlin’s tribal breakdown reflected the immediate demographic realities facing Israel – discounting the Palestinian territories, where residents do not hold Israeli citizenship.A native Jerusalemite, the president said that the city’s ills are emblematic of the greater struggle between Jews and Arabs.“Jerusalem,” he said, “is a microcosm of our ability to live together.”Following his visit this week with President Obama, Rivlin will be honored at a Hanukka event on Sunday in New York City hosted by President of the World Jewish Congress Ronald Lauder. The event will be held in conjunction with the Israel Permanent Mission to the United Nations with Ambassador to the United Nations Danny Danon.