Seven killed, 200 wounded in Amtrak wreck that was moving at twice speed limit

brakes managed to only slightly slow the train from 106 mph to 102 mph in the few seconds before the locomotive and all seven passenger cars derailed. 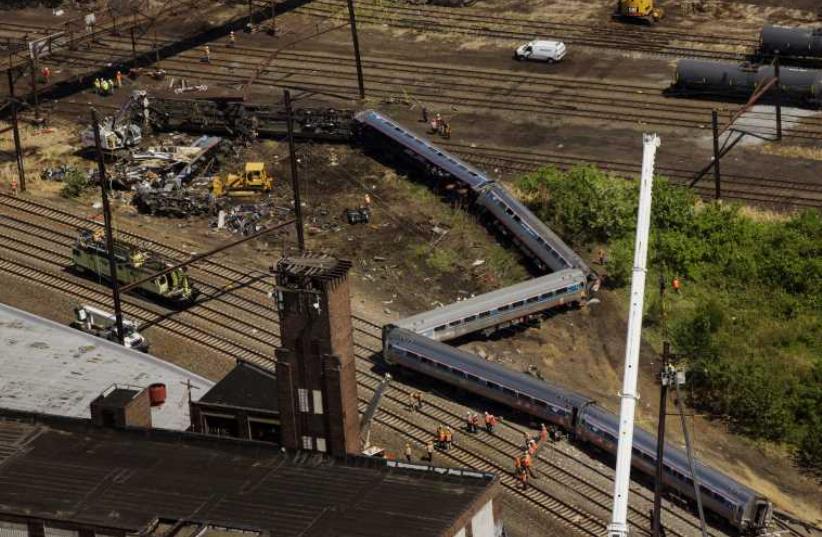 Emergency workers and Amtrak personnel inspect a derailed Amtrak train in Philadelphia, Pennsylvania
(photo credit: REUTERS)
Advertisement
An Amtrak train that derailed in Philadelphia, killing seven people and injuring at least 200 others, was barreling into a curved stretch of track at 100-plus miles per hour, twice the speed limit, when the engineer slammed on the brakes, US investigators said on Wednesday.Hours after launching their probe into the cause of the accident, experts from the National Transportation Safety Board [NTSB] also concluded the derailment would have been prevented by installation of an advanced safety system called "positive train control," NTSB board member Robert Sumwalt said.The engineer of the New York City-bound passenger train fully applied the locomotive's emergency braking system as it entered the left-hand curve in the rail line, where the maximum allowed speed is 50 mph [80 km per hour[, Sumwalt told a news conference.But the brakes managed to only slightly slow the train from 106 mph to 102 mph in the few seconds before the locomotive and all seven passenger cars derailed, he said.A city official speaking on condition of anonymity identified the train's driver as Brandon Bostian. A University of Missouri graduate with a business degree, he has worked as an Amtrak engineer for more than four years and previously served as a conductor for the railway, according to his LinkedIn page.The engineer, among those hurt in the wreck, could not immediately be reached for comment.Philadelphia Mayor Michael Nutter reacted with dismay to the disclosure of the train's speed, calling it "astounding, devastating.""One-hundred, six miles per hour in a 50 mile-per-hour zone ... that's just insane," the mayor said.Authorities have offered no explanation for why the No. 188 train, which originated in Washington, D.C., and had stopped in Philadelphia's 30th Street station about 20 minutes earlier, was traveling at more than double the authorized speed.Asked how long it should take to slow a train moving that fast to the posted speed, the NTSB's Sumwalt replied: "He was already in the curve at that point. You're supposed to enter the curve at 50 miles per hour."Sumwalt said NTSB investigators had yet to interview the engineer but planned to do so after he had a day or two to convalesce. Nutter said the engineer had given a statement to police, though police have declined to comment.Bostian was treated for his injuries at Einstein Medical Center and released, said hospital spokesman Damien Woods.Sumwalt said data from the "black box" recorder recovered at the crash site had yet to be fully analyzed, and investigators also planned to examine video footage from forward-facing cameras attached to the train.He said the NTSB team expected to remain on the crash scene, in north Philadelphia's Port Richmond section along the Delaware River, for about a week.In addition to speed, the NTSB has said it was focusing on the condition of the tracks and signaling equipment, crew training and the performance of the five-person crew.Rail service along Amtrak's Northeast Corridor, the country's busiest with 12 million passengers a year, was disrupted after the accident at about 9:30 p.m. EDT Tuesday, leaving travelers scrambling for alternatives.Rescue workers on Wednesday were still pulling apart the twisted metal and sifting through debris left by the crash. One of the rail cars landed upside down and three were tossed on their sides, while passengers and luggage were sent flying, survivors said.Authorities have not yet accounted for everyone believed to have been on board.Hospitals in the area reported treating more than 200 people, city officials said. Amtrak has said 243 people, including a crew of five, were on board.The crash seemed likely to heighten moves to expand positive train control, or PTC, systems, designed to prevent high-speed derailments. No such system was in effect at the site of the Amtrak crash, officials said.Positive train control automatically slows or even halts trains moving too fast or heading into a danger zone. Under current law, the rail industry must adopt the technology by year-end.But the crash came a day before the House Appropriations Committee approved a transportation budget for the next fiscal year that included a funding cut for Amtrak.One amendment proposed by Democrats called for $825 million in capital investments in PTC technologies for passenger rail, but it was blocked by the Republican majority.Among those killed were Midshipman Justin Zemser, on leave from the U.S. Naval Academy in Annapolis, Maryland; Associated Press video software architect Jim Gaines, 48, a father of two who had attended meetings in Washington and was returning to his home in New Jersey; and Abid Gilani, a senior vice president at Wells Fargo & Co's commercial real estate division.The wreck was expected to renew concerns about the state of the aging U.S. rail infrastructure, but it also called into question the role of human factors in train accidents.An NTSB investigation into the deadly Metro-North Railroad derailment that killed four people in the New York borough of the Bronx in 2014 found engineer William Rockefeller had a serious sleep disorder known as sleep apnea.A contributing factor in that high-speed crash, the NTSB said, was the railroad's failure to screen engineers for the problem and the failure of federal regulators to require such periodic testing.