#4 Steven Mnuchin - Skyrocketing to the top

Mnuchin was one of the president’s most “troublesome” cabinet appointees for Democrats, who were concerned with the banker’s role at Goldman Sachs.

By MICHAEL WILNER
SEPTEMBER 20, 2017 13:36
Steven Mnuchin
(photo credit: REUTERS)
Advertisement
Steven Mnuchin’s rise to power was a sharp ascent: a former Goldman Sachs banker, he had no government experience before Donald Trump tapped him as Treasury Secretary last year. Mnuchin was one of the president’s most “troublesome” cabinet appointees for Democrats, who were concerned with the banker’s role at Goldman in promoting the credit default swap system that led to the 2008 financial crisis.At the Treasury Department, Mnuchin is leading an effort to identify non-nuclear individuals and entities that the US may sanction without violating an international nuclear agreement brokered with Iran under Barack Obama.“We will use everything within our power to put additional sanctions on Iran,” Mnuchin told a House panel in May. “I can assure you that’s a big focus of mine, and I discuss it with the president.”


In the months since, Mnuchin has directed his team to investigate Iran’s aircraft licenses and has added new sanctions designations against Iran related to its missile program.As one of the most senior Jewish members of the Trump administration, a spotlight fell upon Mnuchin as he stood alongside the president on August 15 in Manhattan, when Trump railed against those attacking his response to a neo-Nazi rally in Charlottesville days before. Mnuchin later defended the president’s crisis management. 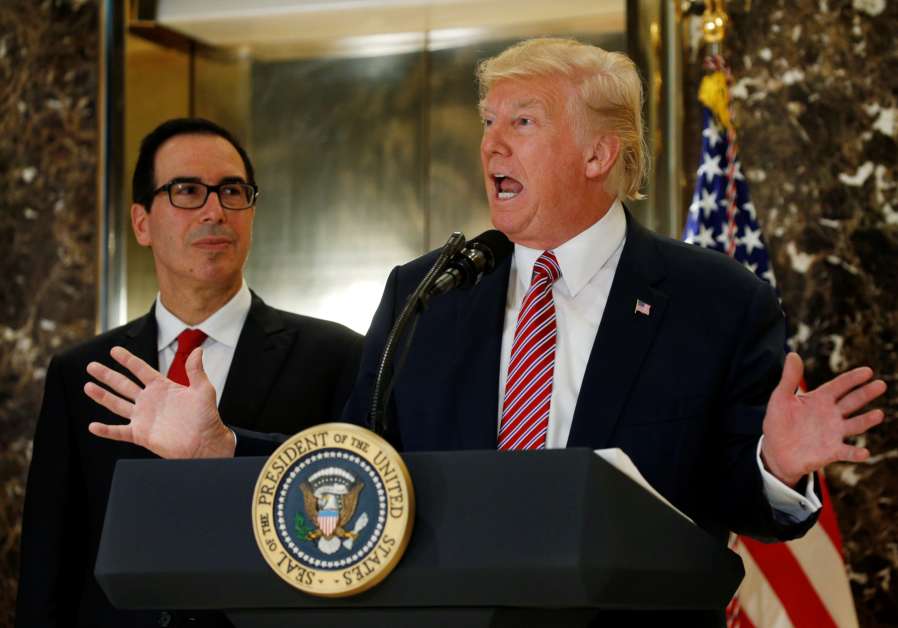 U.S. President Donald Trump answers questions about his responses to the deaths and injuries at the "Unite the Right" rally in Charlottesville as he talks to the media with Treasury Secretary Steven Mnuchin (L) at his side in the lobby of Trump Tower in Manhattan, New York, U.S., August 15, 2017.“I think there’s no question that the president was not equating the hate groups with the people who were peacefully [protesting them],” Mnuchin said, after Trump said that “very fine people” marched alongside the neo-Nazis and that “many sides, many sides” were at fault for the violence that unfolded there.“Under no circumstances,” he added, “was I going to resign.”