3 dead, including 8-year-old boy, and over 140 injured in 2 explosions at annual marathon's finish line.

By TOVAH LAZAROFF, JPOST.COM STAFF, REUTERS
Boston blast 370
(photo credit: REUTERS/Dan Lampariello)
Advertisement
US authorities do not yet know who planned and carried out explosions at the Boston marathon Monday that killed three and injured over a 140 people, but they are handling the incident as "an act of terror," a White House official said."Any event with multiple explosive devices - as this appears to be - is clearly an act of terror, and will be approached as an act of terror," the official said."However, we don't yet know who carried out this attack, and a thorough investigation will have to determine whether it was planned and carried out by a terrorist group, foreign or domestic," the official said.Two bombs ripped through the crowd at the finish line of the Boston Marathon on Monday, killing three people and injuring over 140 people with some victims suffering amputations.US President Barack Obama, however, was more cautious in his statements."We still do not know who did this or why, and people shouldn't jump to conclusions before we have all the facts," Obama said in a televised statement from the White House. "But make no mistake, we will get to the bottom of this, and we will find out who did this, we'll find out why they did this."Obama said he has directed the federal government to increase security around the United States as necessary after the explosions.The attack was the worst bombing on American soil since far-right militant and US citizen Timothy McVeigh set off a massive truck bomb that destroyed the Federal Building in Oklahoma City in 1995, killing 168 people.Two years earlier, Islamist militants bombed the twin towers of the World Trade Center, killing six people and wounding more than a 1,000.The Pakistani Taliban, that was responsible for the September 11, 2001 attack, denied any involvement in the Boston attack on Tuesday. "Wherever we find Americans we will kill them, but we don't have any connection with the Boston Explosions," CNN quoted Taliban spokesman Ihsanullah Ihsan as saying.The US Federal Bureau of Investigation (FBI) led a battery of federal, state and local law enforcement agencies in investigation into the blast in the early hours of Tuesday. The two bombs' devices using gunpowder as the explosive were packed with ball bearings and other shrapnel to maximize injuries, said a senior law enforcement official briefed on the investigation who declined to be identified because of the sensitivity of the information.Agents searched an apartment in the Boston suburb of Revere late on Monday, local media reported but did not elaborate. No one had been arrested so far. 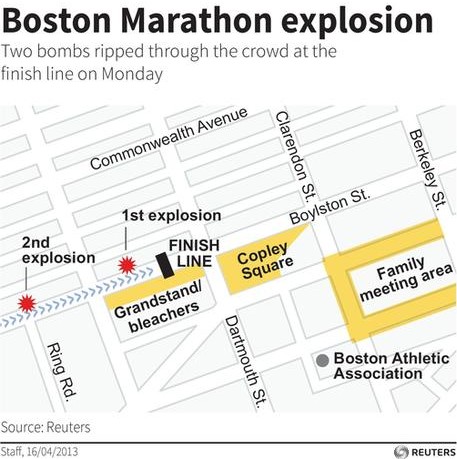 Reports of a third explosion at the John F. Kennedy Presidential Library, which is three miles from the marathon's finishing line, proved to be false.
"We are not certain that these incidents are related, but we are treating them as if they are," Boston Police Commissioner Ed Davis told a news conference.
Davis said that the blasts, apparently some 50-100 meters apart, caused "multiple casualties." He added urged people to stay home or go back to their hotels, and to avoid congregating in large crowds. "People should be calm, but they should understand that this is an ongoing event," he said.
Two high-level US law enforcement officials said one or more bombs were responsible for the explosions."It sounded like a sonic boom. I haven't stopped shaking yet," said Melissa Stanley, who watched her daughter cross the finish line four minutes before the explosions.A fireball rose from behind spectators and a row of flags, video posted on the New York Post website showed. Other pictures showed blood stains on the ground and several people knocked down.
Massachusetts General Hospital was treating dozens of victims of the explosion in its emergency room. Doctors treated 29 patients including eight who were in critical condition, Peter Fagenholz, a trauma surgeon at Massachusetts General Hospital.
Some suffered shrapnel wounds and amputations and will require repeat operations in the coming days, Fagenholz said. Many of the seriously injured patients had suffered bone, soft tissue and vascular damage to their legs, he said.
An eight-year-old boy was among the dead, the Boston Globe reported, citing two law enforcement sources briefed on the investigation. A two-year-old was being treated at Boston Children's Hospital for a head wound, the hospital said.
The blasts put police on alert in major cities across the United States, including in Washington, DC, and New York City, sites of the September 11 attacks.
Hundreds of thousands of spectators typically line the 26.2 mile (42.19 km) race course, with the heaviest crowds near the finish line. The two explosions came moments apart some four hours and nine minutes into the race, long after the world-class runners had finished but around the time average contestants were arriving.The Boston Marathon has been held on Patriots Day, the third Monday of April, since 1897. The event, which starts in Hopkinton, Massachusetts and ends Boston's Copley Square, attracts an estimated half-million spectators and some 20,000 participants every year.
Matt Rand contributed to this report.
Advertisement
Subscribe for our daily newsletter