"I could not be more honored to be in Jerusalem to say farewell to my friend Shimon Peres, who showed us that justice and hope are at the heart of the Zionist idea." 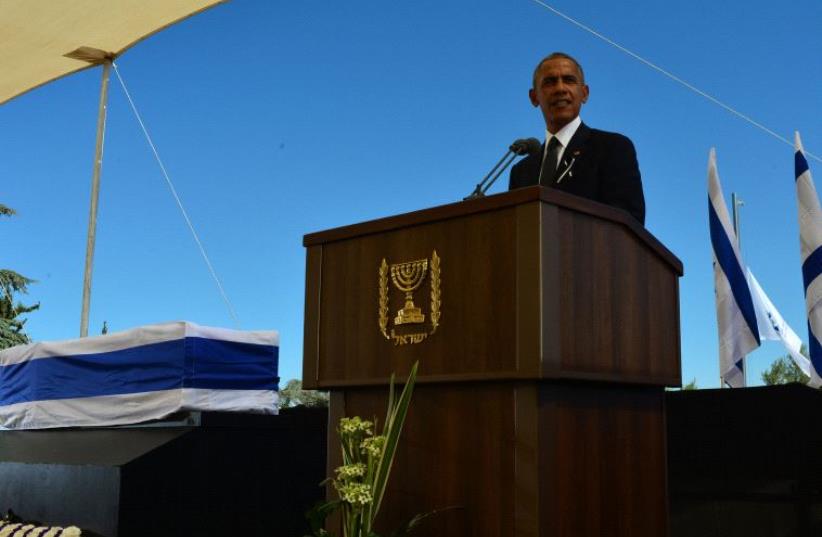 US President Barack Obama at Shimon Peres's funeral.
(photo credit: KOBI GIDON / GPO)
Advertisement
WASHINGTON -- US President Barack Obama offered heartfelt condolences at the funeral of his friend, Shimon Peres, on Friday, traveling for 22 hours to spend just six on the ground in a show of support.But whether or not he was on Israeli ground to pay respects to one of the founding fathers of the Jewish state, there is a question that now risks eclipsing his gesture, after the White House issued an embarrassing correction on Friday night indicating that Jerusalem is, in fact, disputed territory. 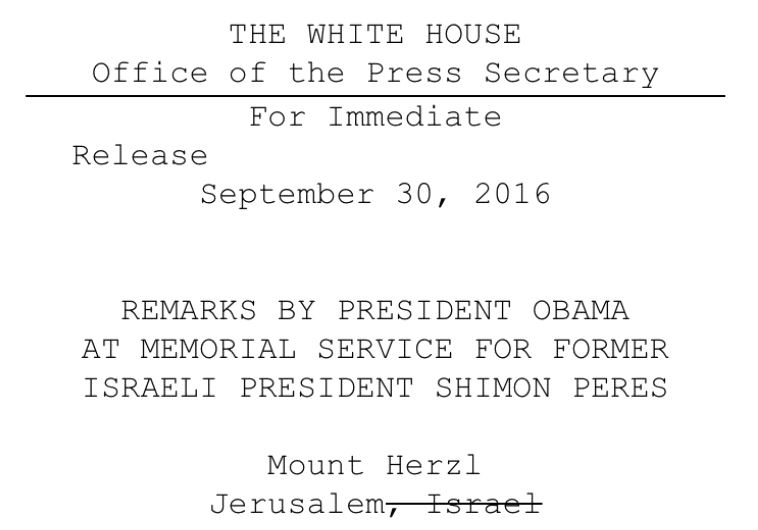 The transcript of Obama’s eulogy of Peres, who was buried on Mount Herzl in Jerusalem, originally listed the ceremony as being held in Jerusalem, Israel.Six hours later, the White House sent out a corrected version of the transcript with Israel explicitly crossed out of the header.“I could not be more honored to be in Jerusalem to say farewell to my friend Shimon Peres, who showed us that justice and hope are at the heart of the Zionist idea,” Obama said at the funeral. “The last of the founding generation is now gone.”While the Democratic Party platform recognizes Jerusalem as the capital of Israel, the State Department has long demurred from doing so, and does not refer to the city, unified since 1967, as Israeli territory.“The administration’s policy toward Jerusalem follows that of previous US administrations – of both parties – since 1967,” a senior administration official told The Jerusalem Post, explaining the correction.“The status of Jerusalem is an issue that should be resolved in final-status negotiations between Israelis and Palestinians. We continue to work with the parties to resolve this issue and others in a way this is just and fair, and respects the rights and aspirations of both Israelis and Palestinians.”Obama, traveling with former president Bill Clinton, US Secretary of State John Kerry, Democratic leader Nancy Pelosi and 29 other dignitaries, arrived back in the US at roughly 6:30 p.m. on Friday.On the tarmac, Clinton said he is still hopeful that a twostate solution will eventually come to pass. “I think that, in the end, it will happen,” he said.House Speaker Paul Ryan’s office weighed in immediately upon hearing of the correction.“Speaker Ryan was proud to visit Jerusalem, the capital of Israel, earlier this year,” his spokeswoman, AshLee Strong, told the Post on Friday night.Israeli officials privately expressed frustration at the White House’s move, but declined to immediately comment for this report.The Israeli government has long maintained that Jerusalem is its “undivided and eternal capital,” and will remain so under any peace agreement resulting in the establishment of a Palestinian state.