A senior official said that the White House will not oppose efforts by Democrats in Congress to block vote disapproving of the Iran nuclear deal. 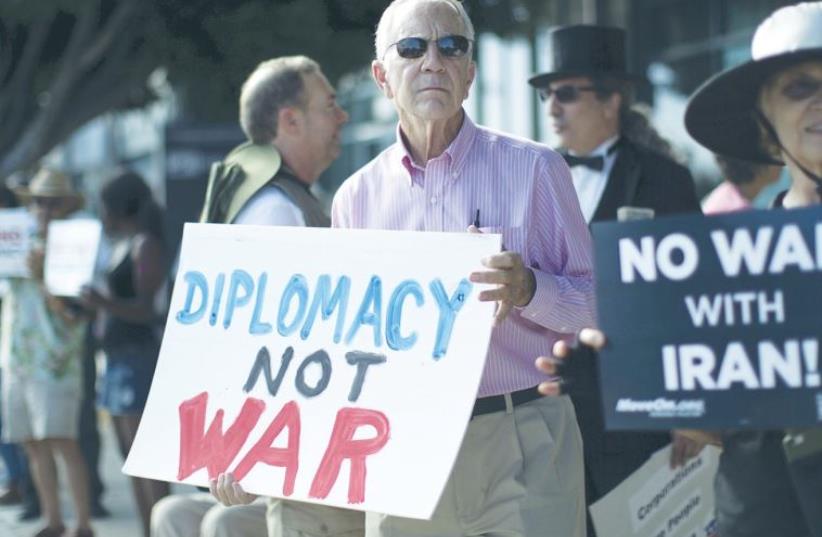 PEOPLE DEMONSTRATE in favor of the Iran nuclear deal in Los Angeles on Wednesday
(photo credit: REUTERS)
Advertisement
WASHINGTON – The White House will not oppose efforts by the Democratic leadership in Congress to block a vote on a resolution disapproving the Iran nuclear deal, a senior administration official told The Jerusalem Post on Wednesday.The official’s comments came after the White House scored a key victory on Wednesday, securing the 34 votes necessary in the Senate to preserve the agreement by upholding a presidential veto should the resolution pass.But US President Barack Obama needs seven more Democratic votes to avoid a vote altogether. That will allow the caucus to filibuster – a parliamentary maneuver that would prevent a vote.The Republican leadership, the official said, is trying to confuse the public with inside-the-beltway tactics in the lead-up to the vote later this month. Thus far, 56 senators are against the deal, while 34 have publicly endorsed it.“I’ll leave it to Senate leadership to discuss process around the upcoming votes,” the senior administration official said. “However, to suggest that we haven’t been debating this agreement throughout the course of the review period is absurd.”“Republicans are hoping to confuse the public on a Washington insider procedural stunt,” the official continued. “This has been a national debate that we have had with Congress, and the president has been making his case directly to members, the press, and to the American public.... We will continue that debate when Congress returns to DC next week, and we will continue to forcefully make the case that this is an exceptionally strong argument.”Earlier on Wednesday, the American Israel Public Affairs Committee and the American Jewish Committee both urged an up-or-down vote on the deal.A bipartisan bill, negotiated by Sen. Bob Corker (R-Tennessee) and Sen. Ben Cardin (D-Maryland) passed the Senate with 98 senators in favor this summer that allowed for vote of approval or disapproval.Cardin has yet to declare support or opposition to the deal.Congress’s mandated review period ends on September 17.