By ASSOCIATED PRESS
MAY 30, 2010 20:24
mcchrystal gibbs 311
(photo credit: AP)
Advertisement
KABUL, Afghanistan — The commander of US and NATO forces in Afghanistan said Sunday there was "clear evidence" that some Taliban fighters had trained in Iran.Gen. Stanley McChrystal told reporters in the Afghan capital that Iran had generally assisted the Afghan government in fighting the insurgent group. "There is, however, clear evidence of Iranian activity — in some cases providing weaponry and training to the Taliban — that is inappropriate," he said, adding that NATO forces were working to stop both the training and the weapons trafficking.RELATED:
80 killed in terror attacks in Lahore
'Lahore attackers were Taliban'
Lieberman warns of new 'Axis of Evil'Last month, McChrystal said there were indications that Taliban were training in Iran, but in small numbers and in a way that did not indicate that it was part of an Iranian government policy. He did not give details on how many people have trained in Iran at Sunday's news conference.NATO said a service member was killed Sunday in a small arms attack in southern Afghanistan, bringing overall NATO losses in May to 49, according to a tally by The Associated Press. That makes May the deadliest month for foreign troops in Afghanistan since a spike in February during a major offensive in Marjah, when 53 were killed, including 31 Americans.The nationality of the service member killed Sunday was not released. May is already the 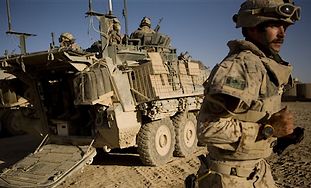 deadliest month for US forces this year, with 32 troops killed. The month also brought the 1,000th US military death in the Afghan war since it began in 2001.The AP's figures are based on Defense Department reports of deaths as a direct result of the Afghan conflict, including personnel assigned to units in Afghanistan, Pakistan or Uzbekistan. Non-US deaths are based on statements by governments that have contributed forces to the coalition.'Afghanistan fight will draw out beyond July 2011'The Taliban have spread out beyond their heartland in the south in recent years to increasingly launch attacks countrywide.In the north, insurgents detonated a remote-controlled bomb Sunday as a police convoy passed by, killing seven officers in a province previously considered to be relatively safe, said deputy provincial Gov. Shams-ul Rahman. The attack was the deadliest of a half-dozen separate incidents across the country.In eastern Paktia province, NATO planes dropped guided bombs on Saturday to kill a team of militants that had fired mortars at coalition forces in Zormat district.McChrystal stressed to reporters that the Afghanistan fight will extend long beyond July 2011, when US President Barack Obama plans to start drawing down forces.In recent meetings with President Hamid Karzai, Obama "reaffirmed the strategic partnership, which is way beyond July 2011," McChrystal said. "I think President Obama's decision to begin the reduction of US forces in 2011 really needs to be viewed in that context."However, the strategic partnership depends on being able to transfer some responsibility to Afghan forces, which are still plagued by a lack of training and distrust of the people despite years of training programs funded by the international community.Summer offensive planned for Taliban birthplaceThe Marjah offensive has been followed by the re-infiltration of Taliban forces into the area despite a continuing strong US Marine presence."We've dramatically changed the state of the insurgency in that region," McChrystal said, while acknowledging that "progress there is not yet fully established."A summer offensive planned for the Taliban birthplace of Kandahar will be similarly painstaking, McChrystal said. The plan is to focus on delivering services like electricity and water, he explained."Progress will be measured in months, rather than days," he said.Also Sunday, Canada said the chief of its forces in Afghanistan, Brig. Gen. Daniel Menard, was being relieved following allegations of an inappropriate relationship. Col. Simon Hetherington, the acting commander of Canada's forces, said Menard's dismissal would not have an impact on the Canadian mission in southern Afghanistan.
Advertisement
Subscribe for our daily newsletter