Netanyahu to Hollande: Israel will not be bound by 'bad' agreement on Iran

By HERB KEINON
Netanyahu and Hollande press conference 370
(photo credit: Koby Gideon/GPO)
Advertisement
Israel will not be bound by a “bad agreement” with Iran, and when it says “never again,” it means it, Prime Minister Binyamin Netanyahu said on Sunday night at a press conference with French President François Hollande.The press conference followed a visit Hollande, accompanied by Netanyahu, paid to Yad Vashem, and the prime minister evoked the Holocaust in explaining his thinking on Iran. 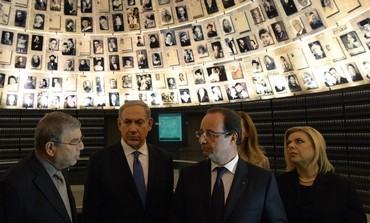 French President Francios Hollande and Prime Minister Benyamin Netanyahu visit Yad Vashem museum, Nov. 17 2013.
“You said when you came out [of Yad Vashem] that the experience of the Holocaust places a very special responsibility on all of us,” Netanyahu said. “François, I want to tell you the burden it places on me. It is my duty to prevent anyone who credibly threatens to execute another Holocaust against the Jewish people. This is my obligation, but our common obligation for mankind and for our common future.”Netanyahu praised Hollande for the tough stand he has taken on Iran and said that France has stood up “for what is right, and I appreciate that.”Hollande, who upon landing in Israel said that France would not surrender to nuclear proliferation and would stand firm by its demands on the Iranians before consenting to an interim agreement, spelled out at the press conference at the Prime Minister’s Residence what those conditions were.Hollande said France was demanding that all Iran’s nuclear installations be placed under international controls, the suspension of all uranium enrichment to 20 percent, the reduction of existing stockpiles of enriched uranium, and a complete halt to the construction of the heavy water reactor at Arak.“These are four points fundamental for an agreement to be reached,” he said.Hollande said firm guarantees that Tehran had abandoned its nuclear weapons program were necessary.“We want a serious, significant agreement that will give results,” the French president said, adding that the sanctions pressure needed to be continued, and that it was the sanctions that have moved the Iranians at all.Netanyahu said that from his point of view a good agreement was one that dismantled the Islamic Republic’s ability to prepare fissile material, which is the core material of a bomb.Though reiterating his opposition to interim agreements – such as the one the P5+1 is discussing with Iran – the prime minister said he could live with it if it was within the framework of an agreement that would dismantle Iran’s capabilities.Unfortunately, he said, that was not currently on the table, and what was being discussed was a deal that would allow Tehran to keep in place capabilities that would enable it to create enough fissile material for a bomb within “26 days.”While Iran dominated Netanyahu’s talks with Hollande, as well as the public statements made during the French president’s first day here, Hollande did say on a number of occasions that France backed the current negotiations between Israel and the Palestinians, and that both sides were going to need to make gestures to the other.Asked about the settlement issue, he said that they make it less likely to reach an agreement, and that he was pleased that Israel backed away last week from an announcement of preliminary plans for more than 20,000 housing units over the Green Line.Hollande is expected to address the Palestinian issue more on Monday, during his meeting in Ramallah with the Palestinian leadership.After Ramallah he is scheduled to address the Knesset, and then will be President Shimon Peres’s guest at a state dinner.Following his arrival at the head of a massive delegation that included seven ministers and some 200 businessmen, aides and journalists, Peres officially welcomed Hollande at his residence in the capital.Hollande then laid a wreath at Theodor Herzl’s grave, visited Yitzhak Rabin’s grave, and went to Yad Vashem before meeting Netanyahu in private, followed by a dinner meeting.Though French Foreign Minister Laurent Fabius accompanied Hollande, he left suddenly when it was learned that French hostage François Collomp had freed himself from captivity in Nigeria. Fabius left Israel for Nigeria to receive him.Hollande is the first of three major world statesmen Netanyahu will meet this week. On Wednesday, he will travel to Moscow to meet with Russian President Vladimir Putin, the same day negotiators from the P5+1 and Iran will again be meeting in Geneva for talks, and on Friday, US Secretary of State John Kerry is scheduled to arrive here for additional talks.Netanyahu admitted on Sunday to differences with the US on Iran, telling the cabinet that there can be disagreements even between the best of friends, “especially when it comes to our future and our fate.”Netanyahu told the cabinet at its weekly meeting it was his responsibility as prime minister to look out for the vital interests of the country, when faced “with a bad agreement. I hope that we will be able to convince our friends to put forward a much better agreement, and that is possible.”The Iranians are under severe economic pressure, and a continuation of that pressure could lead to a better result, he said.“I believe that many in the region, and outside of it, agree with this,” he said.Differences between the US and Israel over Iran and the Palestinian issue came to the fore during Kerry’s last visit here some two weeks ago.Netanyahu said Kerry is coming here to push forward the negotiations with the Palestinians, but that the talks will also focus on the Iranian negotiations.Amid a public strain between Jerusalem and Washington, Netanyahu stressed that Kerry “is an old friend of mine, and he is also a friend of Israel.”