'Turkey may be site of nuke swap'

By JPOST.COM STAFF, ASSOCIATED PRESS
MAY 16, 2010 23:21
Recep Tayyip Erdogan 311
(photo credit: Associated Press)
Advertisement
Turkish Prime Minister Recep Tayyip Erdogan suggested Sunday before departing for Teheran to join talks on Iran's nuclear program that the uranium swap could take place in Turkey."We will find the opportunity to start the swap process. That is why I am leaving," he told reporters. "If the swap is going to take place in Turkey, we thought we should be there too. We have heard that a clause is being added.""God willing, we will find the opportunity to overcome the problem," he said.Turkey's Erdogan will join Brazilian President Luis Inacio Lula da Silva in efforts to bring Teheran back to negotiations on a one-time UN-backed proposal it effectively rejected, in which Iran would ship its stockpile of enriched uranium abroad to be processed further and returned as fuel rods that could not be enriched to military-use levels, which are suitable for use in the Teheran research reactor.Counting their chickens before they've hatched?Brazil and Turkey may be competing over which of the countries will have the role of enriching Iran's nuclear material. However, there is no guarantee yet the world powers negotiating with Iran: the US, UK, France, Russia, China and Germany - will accept the terms worked out in Teheran. 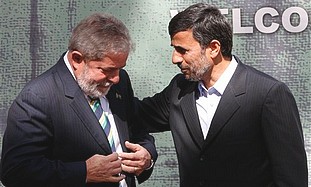 Silva met with Iran’s president, Mahmoud Ahmadinejad and its supreme leader, Ayatollah Ali Khamenei on Sunday, but no public statement concerning the nuclear issue was made.Speaking after the meetings, Silva called the relationship between the two countries “strategic.”The Iranians focused on mutual relations and criticism of the US, praising Brazil for maintaining its independence in a world dominated by a few countries."Iran and Brazil are two emerging powers and many of the world's future issues will depend on how these two countries interact," Ahmadinejad said. "Brazil and Iran belong to the future while the system of domination (led by the US) belongs to the past."

Speaking in defense of Iran’s right to “independently navigate its course” to seek development and improvement, Silva stressed that a peaceful nuclear research program was within Iran’s sovereign rights.Silva, who is in Iran for the Summit of the Group of 15 developing nations, went on to say that there were those who hoped his visit would fail.Ahead of the visit, sources in the US State Department called Silva's visit the last chance for Iran to prevent the next round of sanctions against it. Secretary of State Hillary Clinton predicted that Silva's mediation effort would not succeed, saying new sanctions are the only way to bring Iran around to cooperation.
Advertisement
Subscribe for our daily newsletter