Few areas of Iranian market remain untouched by sanctions, but Tehran will limp on as long as it has buyers for oil.

By REUTERS
FEBRUARY 6, 2012 12:26
Iranian rial 390
(photo credit: Reuters)
Advertisement
DUBAI - Tightening international sanctions against Iran look set to shrink its economy, push up inflation and further erode its currency, but they may fail to deliver a knock-out blow that forces Tehran to compromise on its nuclear ambitions.Few areas of Iran's economy now remain untouched by the sanctions. Because of payments difficulties, Iranian ships have in recent days stopped loading imports of Ukrainian grain. The United Arab Emirates has told its banks to stop financing Iran's trade with Dubai. Iranians are finding it more difficult to obtain hard currency to travel abroad.But the history of sanctions against other countries, and the strengths of Iran's diverse and relatively self-reliant economy, suggest that as long as Tehran can find buyers for a large proportion of its oil, it will be able to limp along.The pain will be felt throughout the country and could increase discontent with the government, but if President Mahmoud Ahmadinejad can cope with that political threat, there may be no overriding economic reason for him to back down."Iran can still scrape by," said Gary Hufbauer, a fellow at the Peterson Institute for International Economics in the United States and a former US Treasury official who has written extensively about the history of sanctions.He ranks the measures against Iran - taken to stop what the West sees as Tehran's nuclear ambitions - as among the toughest international sanctions of the past 50 years, but not as harsh as those once imposed on Iraq, North Korea and Cuba - countries which defied economic pressure.Iran's energy exports as proportion of GDP relatively smallThe latest sanctions focus on Iran's exports of oil and gas because they are vital to its foreign trade. In its latest comprehensive assessment of the Iranian economy, published last July, the International Monetary Fund estimated energy exports would amount to $103 billion in the fiscal year to March 20, 2012, or 78 percent of total exports.But as a proportion of Iran's overall economy, energy exports are much smaller, only 21% of gross domestic product in the 2011/2012 year, according to the IMF's projections. That is lower than ratios of 30-50% for the Gulf Arab oil exporters, and suggests Iran is better placed than they would be to absorb a hit to energy shipments.The European Union, which plans to halt imports of Iranian oil on July 1, has been taking a fifth of the country's shipments; other big buyers such as Japan and South Korea, each with about 10%, may be pressured into reducing purchases.But China and India, which already take a combined 34%, have signaled they will not cut back, and such countries will end up buying most or all of the Iranian oil rejected by the EU.Hufbauer said Iran might have to sell its oil at a discount of 10 to 15% to find buyers under sanctions. Assuming a 15% discount applied to all shipments and a 10% cut in overall shipments, Iran's energy export earnings would shrink by around $24 billion - a heavy blow, but not a crippling one for a $480 billion economy.The sanctions do not ban most Iranian non-oil trade, but that can be expected to suffer too as the West uses tools such as anti-money laundering laws to discourage banks around the world from financing business. This may force Iran's exporters to rely more on costly middlemen in Asia and neighboring states which have not signed up to tough sanctions, such as Iraq, and conceivably to use barter deals for some trade.If non-oil exports take the same kind of hit as energy shipments, they could decline by about $7 billion from the IMF's estimate for this fiscal year. The combined hit to trade would be around $31 billion, or 6.5% of GDP - enough to push the economy, which the IMF has projected will grow 2.5% this year in inflation-adjusted terms, into recession.In the long run, the damage to Iran's energy exports could increase as Western bans on the sale of equipment to its oil industry make it difficult to replace parts that wear out. This might be at least partly avoided by a determined sanctions-busting effort, of the kind run with considerable success by apartheid South Africa in the 1980s.Hufbauer estimated that at most, the sanctions against Iran would cut its GDP by 10%. That is about the same impact as North Korea suffered, and below 20% for Iraq, he said. 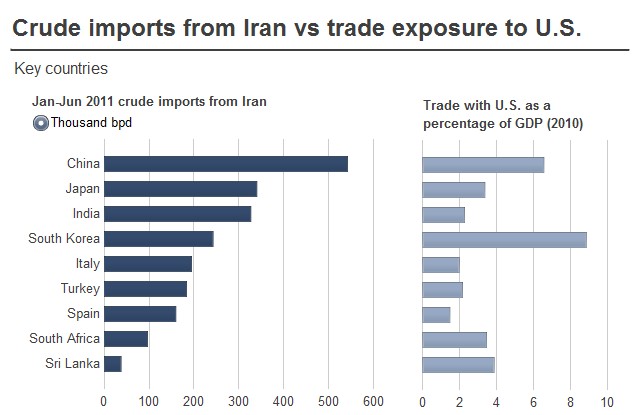 Fall in oil revenues could result in 2% deficit next yearWith oil providing about two-thirds of government revenues, the sanctions will undermine Iran's state finances. The IMF estimated Iran would post a budget surplus of about 2.8% of GDP this fiscal year; the fall in oil revenues, combined with a 10% cut in tax receipts due to a slower economy, could convert that into a deficit of over 2% of GDP next year.That could be troublesome for a highly indebted government. Iran's government is financially strong, however; general government gross debt is just 9% of GDP, compared to levels approaching 100% or more for many EU countries.Iran's low debt means it could easily finance much sharper deterioration in the budget balance through selling domestic bonds or other measures, said Raza Agha, Middle East and North Africa economist at British bank RBS."The public finance impact seems manageable in the immediate future given the bulwark of public sector deposits and other domestic financing options available to the government."Iran's inflation is surgingIt is in the link between Iran's balance of payments, currency and inflation that the economy looks most vulnerable. The IMF estimated Iran would post a balance of payments surplus of $31 billion this fiscal year; the drop in export earnings due to sanctions could wipe that out next year or even push Iran into an external deficit.Normally, Iran's foreign exchange reserves could cover the deficit comfortably; the IMF estimated the central bank's net foreign assets at $104 billion this fiscal year. Although the EU has said it will freeze Iranian central bank assets under its jurisdiction, Iran has had plenty of time to move its reserves out of Europe and other US allies.

Click here for full Jpost coverage of the Iranian threat
But a surge in Iranian inflation is complicating the picture. The official inflation rate has jumped from single digits to around 20% in the past 18 months; analysts think the real rate is higher. The rise is mostly because of economic reforms which cut energy and food subsidies at the end of 2010, but also because sanctions make imports more expensive.High inflation is adding a collapse of confidence in the Iranian rial, boosting its black market rate to above 20,000 to the dollar last month from roughly half that level a year ago.That threatens to accelerate capital outflows from Iran, which the IMF originally projected at $11 billion this fiscal year, and deplete foreign reserves much faster than would otherwise have been the case.It could also boost imported inflation further. Iran has shown it can operate with high inflation - the rate was above 25% as recently as the 2008/09 year -- and since imports are worth only about 16% of GDP, currency depreciation will not necessarily boost inflation drastically. But there is a risk that in the minds of Iranian businessmen and the public, expectations for a weak currency and rising inflation will become mutually reinforcing.After months of hesitation, Iranian authorities acted aggressively in late January to try to stabilize the rial, raising interest rates on long-term bank deposits as high as 21% from a range of 12.5-15.5%. That may have eased pressure on the currency for now, but the pressure may mount again when the EU's oil sanctions kick in later this year."The currency crisis will probably continue. Ahmadinejad's political aversion to high interest rates, and the high level of disorganization and inefficiency in the government make a comprehensive policy response to the currency crisis unlikely," political risk consultants Eurasia Group said in a report.
Advertisement
Subscribe for our daily newsletter