Haifa’s Kishon Stream, which empties into the Mediterranean, has extremely high levels of pollution due to the various industries in the area.

The Defense Ministry on Tuesday said it will recognize soldiers who became seriously ill after working in the polluted Kishon River for more than 30 days as wounded veterans.

The decision follows the recommendations of an expert committee led by Brig.-Gen. (res.) Ran Bashvitz in coordination with the IDF Disabled Veterans Organization.

The Kishon River is a stream that empties into the Mediterranean near Haifa. It has very high levels of pollution due to the various industries in the area, including a petrochemical factory.

Israel Navy units trained in the stream for years with little awareness of the pollution or the damage to health it could cause.

The military stopped training and operating in the stream after soldiers from Yaltam, Sayetet 13 and other units became seriously sick from their time in the polluted river. 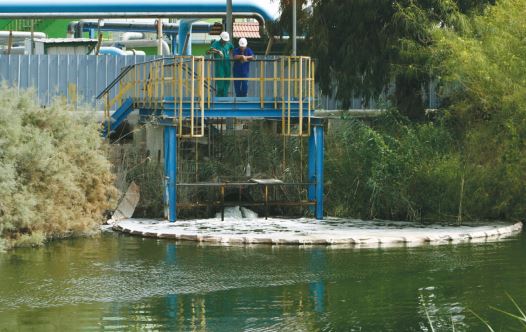 The Shamgar Committee in 2000 and the Shani Commission in 2009 did not discover any direct link between the veterans’ activity in the stream and their illnesses, including cancer, and the Defense Ministry cut back on its coverage of various types of cancer.

The current committee did not blame the two other inquiries that dealt with the issue, but the ministry and its Rehabilitation Division is changing its approach, capabilities and treatments for wounded veterans, Defense Ministry Director-General Maj.-Gen. (res.) Amir Eshel said.

“The team found scientific, medical and regulatory innovations in Israel and around the world that now allow us to expand recognition to more fighters who sacrificed their bodies and health for the sake of national security,” he said.

Bashvitz said due to it being such an “extreme, unusual and unique case, it cannot be compared to any other case. This requires a unique policy that is limited and adapted to the circumstances.”

The committee worked intensively for seven weeks and found that the exposure to hazardous substances, which had been there for many years, was an “extreme, complex event with unique and unusual characteristics.”

The team held eight meetings and spent hundreds of hours studying reports of past committees that examined the Kishon, court rulings, various studies and data from Israel and around the world that examined the possible effects of the different substances in the water and their effect on troops exposed to them.

The committee recommended that all troops who were exposed to the Kishon’s waters “continuously and in an intensive manner exceeding 30 days” would be recognized by the ministry as wounded veterans. All types of cancers will also be recognized, it said.

“We are doing historic justice today with those we sent to fight for us,” Defense Minister Benny Gantz said Tuesday. “Today, we are fighting for them and their families. It is delayed justice, but not too late for many families.”

“We are responsible for sending the soldiers to battle, for training and operational activity,” he said. “We are also responsible for returning them healthy and intact and to care for those who were injured.”