Netanyahu drops to third among settlers, Smotrich climbs to first

Nine things to know about how settlements voted 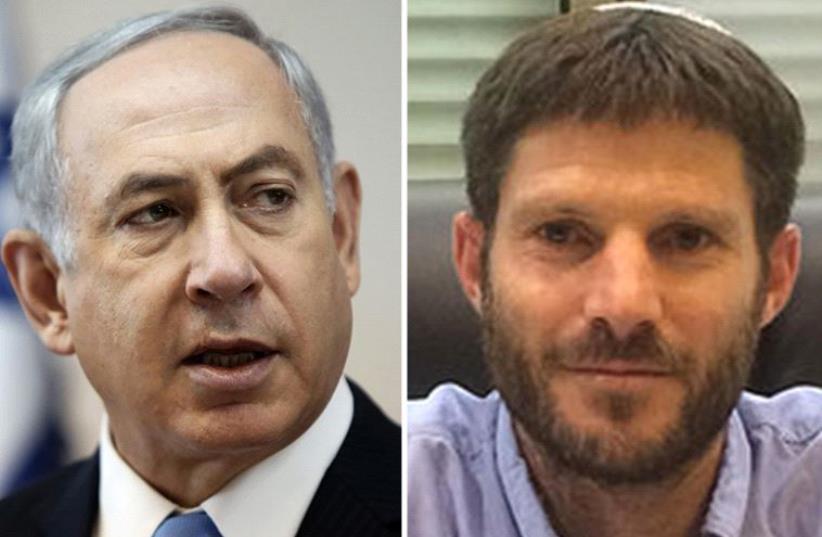 Netanyahu and Smotrich
(photo credit: EITAN POLD/WIKIMEDIA,REUTERS)
Advertisement
Prime Minister Benjamin Netanyahu fell from first to third place among West Bank settler voters, while Religious Zionist Party head Bezalel Smotrich replaced him as the most popular politician in the hilltops of Judea and Samaria.While Netanyahu may have bested all his opponents nationwide by securing 30 seats for Likud – 13 more than his closest rival Yair Lapid and Yesh Atid – he is fighting with Yamina Party head Naftali Bennett over who is best placed to lead a right-wing government.Smotrich may be far from the premiership, but the politician who led a newly formed party in this election has now become the heart of a new, bolder Right. Even Bennett, who has in the past led or has come second among settlers, fell below Netanyahu into fourth place.Here are nine things to know about how settlers voted based on an analysis by The Jerusalem Post of data published by the Central Elections Committee.

Netanyahu only comes in third

Netanyahu has branded himself as the leader of the Right, an identity he has always been loath to lose and which is central to all of his campaigns.His role as champion and protector of the settlements is one of the pillars on which his claim as king of the Right rests. Yet he has struggled from the start to win the hearts and minds of the settlers, despite resounding support from a large swath of it leadership who are members of the Likud Party and have never abandoned it.Samaria Regional Council head Yossi Dagan swore in the days before the election that activists from Samaria would personally work to get out the vote, thereby increasing Netanyahu’s support tenfold.In the last election in 2020, with annexation in the offing, Netanyahu secured settler support and handily won 29.7% of the vote, while Yamina Party head Naftali Bennett trailed behind him at 22.8%. Netanyahu was also the top vote getter in the April 2019 election. This is the first time he has dropped to third place, securing only 19.4% of the vote.

Bennett, who is often seen as Netanyahu’s chief rival on the Right and who has always stood firm on settlements, campaigned this time around corona and the economy. He tumbled down to fourth place among settlers with only 13.5% of the vote, but it was still more than the 6.2% he received nationwide. It was also better than his 11% showing in the April 2019 election, when his party failed to cross the electoral threshold and gain a Knesset seat.

Smotrich is king of the hills

Smotrich, who ran for the first time as a party head, bested all his rivals in Judea and Samaria, receiving 21.7% of the votes, which was slightly more than a full mandate. He did so without receiving any major endorsements from the settler leaders, but with a strong mandate from the religious Zionist rabbis, who told their followers to vote for him.Smotrich received an endorsement in the last weeks of the campaign from Netanyahu, who, in a strange political move, told his supporters to vote for Smotrich by way of attempting to weaken Bennett.Netanyahu made two visits to the West Bank prior to the end of the campaign, to areas that had previously supported Bennett, so that he could personally deliver this message.Himself a settler, Smotrich stood out among the candidates for his strong, no-holds-barred support for West Bank sovereignty irrespective of the diplomatic climate. He has consistently been one of the settlements’ strong champions, both in the Knesset and through field visits.

United Torah Judaism was the second-largest party, receiving 19.5% support, enough for a full mandate.Together with the Shas Party, which came in fifth in the settlements with 9.7% of the votes, the two parties represented 29.2% of the voting power of the settlements.Both parties pulled heavily on voters from the two largest West Bank settlements of Modi’in Illit and Beitar Illit, which are exclusively ultra-Orthodox. In Modi’in Illit, some 19,309 votes went to UTJ and 4,289 to Shas. In Beitar Illit, some 12,752 votes went for UTJ and 5,734 for Shas.

There are seven mandates to be had in the settlements, enough for a mid-size party, but only if all 253,681 eligible voters in Judea and Samaria head to the polls.While it’s true that the settler voting rate – 73.6% on March 23 – was higher than the national average of 67.4%, it was still not a strong enough showing and was part of a slow decline.In April 2019, the settler voting rate was 78%, falling to 76.8% that September, and dropping slightly in March 2020 to 76.2%.Settlements were one of the main campaign issues of the 2020 election, with Netanyahu pledging to annex West Bank settlements if he won.This time around, with annexation suspended and a pandemic on top of everyone’s agenda, the settlements were on the periphery. Candidates had little to exclusively offer settlers aside from national issues to entice them to vote.In the last two weeks of the campaign, Netanyahu spoke of a needed two extra mandates, which he might have found in the settlements – except that 66,984 people failed to vote, leading to a loss of two mandates, leaving politicians with only five mandates to garner from there.

In the last election, Blue and White led by Benny Gantz received 9.1% of the vote.This time around, his party – which Netanyahu blamed for halting efforts to legalize West Bank outposts, and which had initially delayed West Bank sovereignty – received a mere 2.26% of the votes.Lapid, who had run with him in the 2019 and 2020 elections, proved to be more popular, receiving double support with 4.55% of the votes.

New Hope Party head Gideon Sa’ar should have swept the settlements, running neck and neck with Netanyahu.It’s hard to find a more ardent foot soldier on behalf of the settlements than Sa’ar. He is opposed to the creation of a Palestinian state, wants to legalize the outposts, and holds that all of Area C of the West Bank should be part of sovereign Israel.And with Sa’ar, it is not just talk. He is vocal politically in the Knesset, visits the settlements, and shows up at rallies and protests.Sa’ar spoke of West Bank sovereignty long before Netanyahu did, although like him he agreed to suspend it in favor of the Abraham Accords.He also received enormous endorsements from the settlers, with former Yesha Council head Dani Dayan – also the former Israeli Consul-General in New York – running on his ticket. This was followed by Yesha Council head David Elhayani leaving the Likud to join his party.Yet when it came to the ballot box, Sa’ar failed to gain traction in the settlements, receiving only 3.7% of settler support, compared with the 4.74% he garnered nationwide.

Nationwide, Yisrael Beytenu head Avigdor Liberman was more popular than Smotrich, receiving seven mandates to his six. On a popularity scale, the secular candidate won 5.6% of the vote, compared with Smotrich’s 5.1%.In the settlements – where both men live – it was an entirely different story. Liberman traditionally fails to bring out settler voters. This year his popularity waned ever further, dropping from 3.6% in September 2019, to 2.8% in March 2020 to 2.2% this year.Liberman didn’t carry a single settlement. Even in Nokdim where he lives, he came in fourth place, with just 7% of the vote.His largest base of support comes from Ariel, which has a strong Russian immigrant population and where he netted 1,519 voters, followed by Ma’aleh Adumim where 832 people supported him.

Pragmatically, the Labor Party, which believes in a resolution to the conflict that involves the withdrawal from isolated settlements, should not be popular in those communities.So it comes as no surprise that Labor won only 1.6% of the vote, compared with its 5.8% nationwide support. The numbers are a slight bump up from last year, when it received only 1.3% of the settler vote, but still not as high as the 2.3% it received in September 2019.Still, there were at least three isolated settlements where Labor was the most popular party in town: Almog in the Jordan Valley, and Mitzpe Shalem and Netiv Hagdud near the Dead Sea.