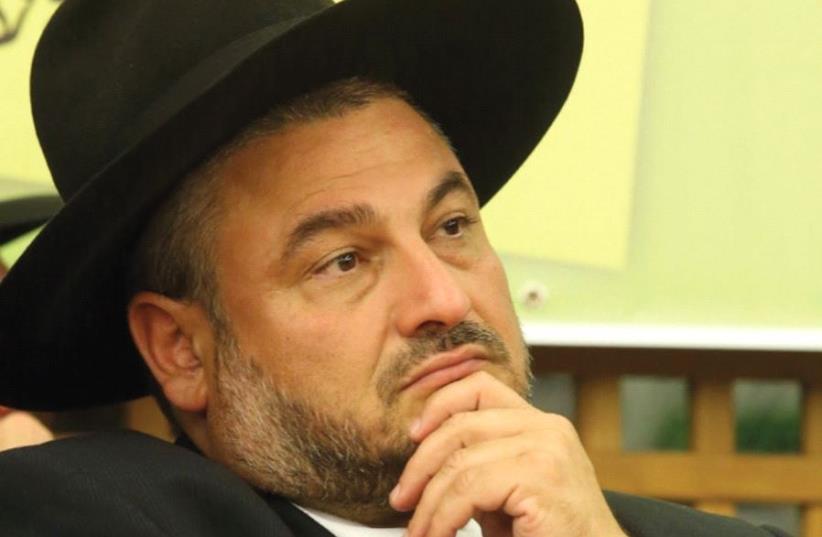 Shas MK Moshe Abutbul
(photo credit: MARC ISRAEL SELLEM)
Advertisement
The Shas party pulled off another impressive election result on Tuesday and appears poised to gain one Knesset seat above its April tally, giving it a total of nine seats.Many readers will likely be familiar with the Shas candidate who will benefit from these results and become the ultra-Orthodox party’s ninth member of Knesset: former mayor of Beit Shemesh Moshe Abutbul.Abutbul became notorious among the non-ultra-Orthodox population of Beit Shemesh for what was seen as his mismanagement of the city, and his seeming indifference to the concerns and needs of its secular and religious-Zionist residents.The failure in particular to tackle the violent ultra-Orthodox radicals who have moved into Beit Shemesh and the consequent societal friction that resulted is another failing that many residents of the city have not forgotten.In addition, many Beit Shemesh residents from the general population complained during Abutbul’s tenure of a lack of adequate municipal services and facilities, and a failure to develop the city economically.“Abutbul was a poor manager,” said Zvi Wolicki, a member of the city’s municipal council representing Likud. “He didn’t have a clear vision for Beit Shemesh, and didn’t take advantage of the tools at his disposal to improve the lives of the residents. I believed he failed in almost every respect. His vision was shortsighted, and did not take into account all residents of Beit Shemesh.”Nevertheless Wolicki said that he hoped Abutbul would “look out” for Beit Shemesh as a member of Knesset, and “be receptive” when issues concerning the city arise, adding that he looked forward to cooperating with the new MK.Former MK Rabbi Dov Lipman, who was active in Beit Shemesh during the height of societal tensions in the city, said that one of Abutbul’s critical shortcomings as mayor was his failure to extricate himself from the influence of extremist rabbis in the city and stand up to their demands.Lipman said however that as an MK in the national government, Abutbul could serve as an address for the general population – including that of Beit Shemesh – and urged him to address the concerns of all the city’s residents should they turn to him.“I hope that as a member of Knesset, Moshe Abutbul does a better job of responsible leadership, in planning properly whatever he is working, and in taking into account the needs of all populations and the importance of unity,” Lipman said diplomatically.