A spring in your step

If you’re looking for a pleasant yet challenging varied day walk, try this Jerusalem-area hike.

By JACOB SOLOMON
JANUARY 25, 2010 16:45
Advertisement
If you’re looking for a pleasant yet challenging varied day walk, try this Jerusalem-area hike. It follows the Israel Trail for most of the way, giving the novice walker a true taste of what the trail has to offer. 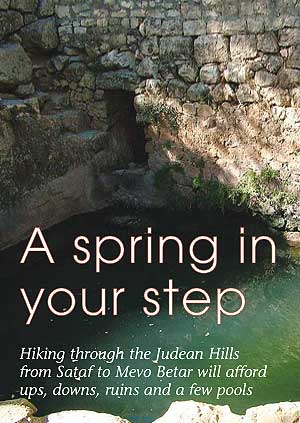 The trek starts at the Sataf cafe, and it follows the well manicured orange, blue and white-marked path that takes you past ruined Arab mansions. It goes down to a 1,000-dunam (250 acre) fragment of traditional mountain- terraced cultivation, which was lovingly restored in the 1980s by the JNF. These farming plateaus (bursting with cabbages and fresh lettuce) are fed by two springs — the Bikura higher up and the Sataf lower down.
For the geologically minded, the Bikura and the Sataf are layer springs. They form where the water-filled permeable limestone meets the impervious yellow marl (clay and flint) rock strata. Weathering and erosion expose the top of the marl layers, at which point the water emerges from underground as a spring. These layer springs’ exits were artificially widened; their waters are collected in cisterns and directed through a system of channels to the levels of the crops that need them most.
Spend at least an hour here — very likely to the peal of the bells of the Monastery of St. John in the Desert further along the trail. Contortionists may explore the springs’ subterranean underground tunnels, and swimmers have a choice of two cisterns (which so far have not been segregated by sex) for bathing purposes.
Most of the terraces, however, have been neglected for decades, bringing to mind a passage from Isaiah: ’My beloved had a vineyard on a very fertile hill. He dug it and cleared it of stones, and planted it with choice vinesÉ he built a watching place in the midst of it, and hewed a vineyard in itÉ he set it to produce grapes, but it brought forth sour polyps’ (5:1-2). 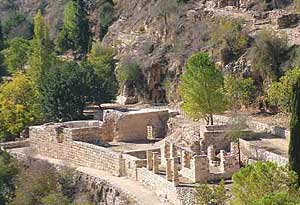 With this parable, the Prophet Isaiah castigated the inhabitants of Israel — the proverbial vineyard — for straying from their spiritual moorings. And you will know exactly what he meant as you take in the discarded farmland that has seen better days, and you cautiously nibble the sour fruit of the long-abandoned trees.
Next, the trail drops down quickly to the Sorek riverbed. Its faint but unmistakable biologically generated stench testifies to the Sorek’s function in conveying the capital’s wastes to the Mediterranean, some of which are detoxified in a modern plant a little lower down the valley.
The air becomes cleaner as the trail turns right, dips under Route 386 and for the next hour makes an exhausting climb beyond the aforementioned monastery. You should pause at the remains of the hewn stone dam, most likely built in the early Arab period (640-1099 CE) to store the waters of the Handak Spring above. The nimble may explore the two dark tunnels chiseled in the wall.
Just outside Even Sapir, the trail makes a sharp left and confronts you with the most precipitous clamber of the day, including three patience-demanding scrambles that the timid can avoid with short circuitous detours. It levels out, and in the last 20 minutes reaches the shaded recreational area of Hirbet Sa’adim — loosely translated as ’The Ruins of the Happy Woman.’ According to legend, the barren were rendered fruitful by the mystical interventions of one Sheikh Ahmed. This spot is ideal for a halfway lunch break.
From here, the hike drops precipitously into the Refaim Valley. It will put even the firmest grips of quality walking shoes to the test. Actually, the route avoids the last plummet as it turns right and follows a wide downhill track along the northern side of the valley, whose eerie silences are broken every half-hour by the diesel-powered trains plying the single-track Jerusalem-Tel Aviv railway.
The sleek cars round the tight bends with caution, and the wooded limestone hills selectively filter and funnel the resonance of their nearing presence. Their approach gives the valley the peculiar sensation of filling up with sound, rather like a bathtub taking on water.
The trail dips under the railroad through a superb white stone arch, and then it snakes up the tributary Kobi Valley. 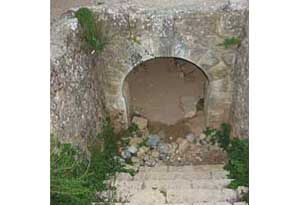 The steep-sided, recently forested Kobi Valley is a splendid one. Geologists believe that its precipitous narrow ’V’ cross-section is produced by the vigorous vertical erosion of the Kobi River as it adjusts to the falling level of the Mediterranean Sea. What was once a sluggish flow has become — at least in winter — a fast rejuvenated fluvial force. Notice the graceful curves incised into the limestone on the left-hand side. They are the remains of meandering waters showing the earlier, much higher course of the river before the base level drop and the current river rejuvenation process.
Continuing on, the trail abandons the wide path halfway up the valley. As it steepens, you will be inclined to brace for another session down on all fours — but you’ll be pleasantly surprised to find yourself on the Silver Family Nature Trail, declared to ’safeguard the paths of justice for He protects the ways of His devout ones’ (Proverbs 2:8). Well manicured and made into a signposted walk, it is graced with park benches and a conveniently incised stepped ascent.
It should take about an hour and half to get to the Kobi Springs and the nearby Kobi ruins. Stop for a well- deserved rest, and you may picnic on the purpose-erected benches amongst the fig and pine trees. Formerly an Arab village carrying the name of Al Kabu, its remains date back to the Byzantine period. With luck, there will be water at the bottom of the 13 steps that go down the spring itself (reminiscent of the Sataf), but don’t count on it.
Though Ein Kobi is privileged with benches, it is marred with litter due to its road access. It’s amazing how the garbage peters out within a few hundred meters, suggesting the very limited distances average visitors stray from the comfort of their cars.
Leave the Israel Trail and follow the wide track southward for 2 kilometers. Turn right along Route 375 for another 20 minutes, walk to the entrance of Mevo Betar and catch bus 184 to Jerusalem.
The details
* Start: Sataf Springs. Accessible directly by car: Take Highway 1 to Mevaseret Zion, go southward along Route 3965 to its junction with Route 395. Turn left onto 395 and go straight along the narrow road to the Sataf parking lot.
* Finish: Mevo Betar, Route 375. There is a stop for bus 184 to Jerusalem.
* Access/Exits: Yad Kennedy. Short walk from Moshav Aminadav (Route 3877), and then another 1.5 km. downhill to Hirbet Sa’adim.
* Level of difficulty: Moderately challenging. Not for small children.
* Length: 14 km. (including road-walking at the end)
* Map: Scale 1:50,000, Map 9 (The Jerusalem Corridor)
* Estimated walking time: 7 hours
* Water: at the start of the walk only.
* Bring: 4 liters of water per person, a sun hat, sunscreen and sturdy shoes with good grips for walking. Include a compass, mobile phone, large towel, first aid kit, penknife and a powerful flashlight. Mobile phone reception varies.