City of David - Gone but not forgotten

The ongoing excavations at the City of David seem to confirm many a biblical narrative and gives some fascinating insights into ancient life.

By AVIVA BAR-AM
JANUARY 25, 2010 20:47
Advertisement
Fromany vantage point in Jerusalem the City of David is a prettyunimpressive sight. Indeed, it is hard to believe that this neglectedpatch of land, a tiny triangle located outside the Old City walls andsouth of the Temple Mount, was once the splendid capital of the mightykingdom of Judah.
But don't be deceived by appearances: Underneath the stones, weeds, andrubble, the City of David is actually a work in progress where ongoingexcavations seem to confirm many a biblical narrative. 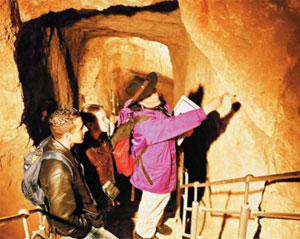 Begin at Jeremiah's Pit, just inside the entrance to the City of DavidNational Park. The largest of the cisterns uncovered here, it islocated in what was probably the courtyard of the contemporaryIsraelite king.
The 6th-century BCE prophet Jeremiah predicted that Jerusalem would belost and her people exiled to Babylon. When King Zedekiah couldn'tstand hearing so much doom and gloom, he ordered Jeremiah lowered intoa cistern which 'had no water in it, only mud, and Jeremiah sank downinto the mud' (Jeremiah 38:6). Both its size and its location indicatethat this could be the famous pit.
Climb to the roof of the Judy Steinberg Exhibition Hall, situated atthe top of ancient Jerusalem. Look down and you will be surprised tofind that the original Holy City was very small. In fact, says tourguide Donna Goldberg, at its widest point it was barely 100 meterswide, and, from north to south, a mere 250m.-300m. long. There weren'tthat many people here either: All told, in David's time Jerusalemprobably held less than 2,000 inhabitants.
David probably chose this site in an effort to unify his subjects. AJebusite (Canaanite) city as yet unconquered by the Israelites andtherefore still neutral, it lay on the border between the territoriesallotted to Benjamin and Judah. It was also situated further north thanHebron, closer to the center of the Promised Land, and flanked by deepvalleys that provided strategic protection on two of its three sides. 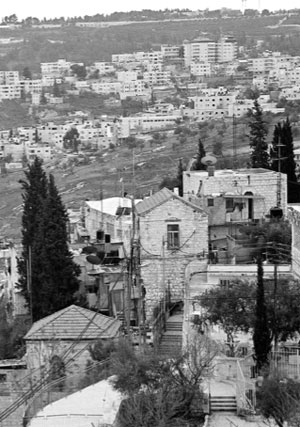