Masada - A mountain of history

Visit this wondrous mountain fortress, dating from the time the Maccabees drove the Greeks out of Israel and became masters in their own land.

By AVIVA BAR-AM
JANUARY 26, 2010 11:39
Advertisement
My mother positively blanched when I suggested we take a trip to MasadaNational Park. 'Don't forget I'm over 80,' she protested. 'How do youexpect me to climb 93 steps?'
Well I had news for Mom: while people who wish to do so can still walkup, down and around the imposing site, today Masada is accessible toeveryone. In fact, if you choose to travel both ways by cable car youdon't have to mount a single stair: a sturdy bridge walkway leads fromthe spanking new cable cars all the way to the mountain.
Begin a super-easy Masada outing at the sand-colored Visitors' Centerthat hugs the slopes and merges with the landscape. Inaugurated inSeptember 2000, it includes a model of Masada, a small but enchantingmuseum, and a thrilling audio-visual production.

Park in the lot, then take the elevator up to the site's new mainentrance and examine the model. Note that Masada differs from otherdesert heights, for its almost-vertical four sides are crowned by aplateau that makes enemy access extraordinarily difficult. Along eachside of the model are relevant passages from the writings of JosephusFlavius, the Jewish commander who defected to the Romans two millenniaago and wrote books about the Jewish-Roman wars.
After roaming the museum and viewing a stirring production, you ascendMasada in a roomy, glass-enclosed cable car. You then take the woodenbridge, with transparent sides that provide a magnificent view of thedesert beneath your feet.
Jews first fortified Masada during the exhilarating years after theMaccabees drove the Greeks out of Israel and became masters in theirown land. Indeed, coins discovered on the mountain date back to thedays of Alexander Janneus (103-76 BCE), one of the Hasmonean (Maccabee)kings.
King Herod, who ruled Judea on behalf of the Roman Empire at the end ofthe first century BCE, was the next to build up the mountain.Justifiably paranoid, and a brutal ruler who reputedly ordered thedeath of innocent babies around the time of Jesus's birth, the kingalso built splendid cities, fortresses and villas. Most history bookscall him Herod the Great. 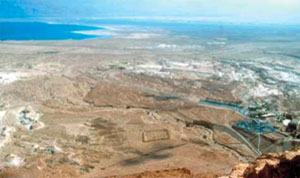 Herod put Masada to use soon after the Romans appointed him king.Jerusalem was attacked by the Parthians, and Herod fled to Petra, butonly after sending the women and children in his family to Masada. Hebegan massive construction on the mountain several years later,erecting two luxurious palaces, a swimming pool, several lavishbathhouses, and a giant water system that seemed to raise Masada out ofthe desert.
Well below the mountain are the remains of eight Roman military camps.
Following Herod's death, a Roman garrison remained to guard Masada. Atthe beginning of the Great Revolt (67-73 CE), in which the Jews ofIsrael rose up against the Roman yoke, a band of daring rebels overcamethe mountain's guards and captured Masada. They were known as theSicarii because of the dagger, called a sica, which each one carried.
After the fall of Jerusalem and the destruction of the Temple in 70 CE,hundreds of Jews joined the Sicarii on the mountain top. These bravemen, women and children, dedicated to the eradication of pagan rule inthe Land of Israel, are known as Zealots. It is their harrowing talethat has become an eternal symbol of the Jewish fight for freedom.
BEGIN WITH the largest building on the mountain - the western palace inwhich Herod apparently conducted business. While waiting to be showninto a very large hall, visitors could sit on plaster-covered stonebenches in the foyer.
To see what remains of the elaborate bedrooms, including some gorgeousmosaic floors with geometric shapes as well as fig and pomegranatedecorations, you must climb a few steps. Interestingly, where some ofthe tiles are missing, you can view the lines made by the artist as heprepared the floor - they lead right into the design! Look for piecesof the columns with which the ceiling was held in place.
Two bathtubs are easily recognizable below you near the steps as youexit. On the other side of the path is an enclosure whose inside wallsare dotted with square holes. Believe it or not, this was a largedesert swimming pool, and the holes were lockers for bathers' clothes!In order to provide water for his pools, bathtubs, cisterns andbathhouses, Herod built an intricate system of aqueducts and reservoirsthat utilized winter floodwaters sucked from the riverbeds and storedin mountainside reservoirs.
During the fifth and sixth centuries, monks lived in caves and cells onMasada, and took advantage of the cisterns that Herod had prepared.Worship took place in the lovely church you see before you. 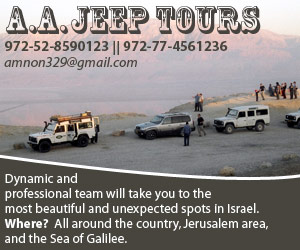 Archeologists here renovated one of the walls, so you can examine themanner in which the monks plastered them and added pebbles forstrength. For some reason, they built the church out of limestone - akind of rock not found on this dolomite mountain. In addition to aneye-catching mosaic floor, you will see a multitude of plain mosaicsand remains everywhere you go. Near the entrance you will find holes inwhich a gate was bolted into the ground.
Continue on the path, this time to the northern palace on the highestpart of the mountain. Built on three levels along the northern edge ofthe cliff, it commanded magnificent views of the Dead Sea, theadjoining mountains and the desert. A steep descent leads down theslopes, while other steps ascend to a tower.
The path leads into a foyer of the palace - incidentally the entranceto the rest rooms. Here you get a look at a ritual bath (mikve). It hasthree parts: one for storing water, one for immersion, and one in whichyou wash your feet.
If you can manage a few steps, you can visit the palace's elaboratebathhouse, which is decorated with splendid frescoes. The entranceincluded a covered, plastered pool with colored walls where peoplecleaned themselves before going into the sauna. They first entered thetepid room, then the hotter chambers.
People unable to climb stairs can rest in the shade while examiningphotographs illustrating the inside of the palace. Afterwards, you canexplore the rooms on this level, including that in which 11 famouspottery shards were discovered. Each fragment bore a name, includingthat of Elazar Ben-Yair, the Zealot leader.
In 73, after the Great Revolt had been savagely subdued, the Romansdecided to put an end to the last pocket of resistance - the freedomfighters of Masada. For three years the Zealots managed to keep theRomans off the mountain. Nearly 10,000 troops first tried starving theJewish rebels, and when that didn't work, they utilized everyconceivable kind of contemporary siege weapon in an effort to breakthrough the seemingly impregnable fortress. After the wall wassuccessfully breached, it became clear to everyone that the end wasnear.
That night, Elazar Ben-Yair called his people together - 967 men, womenand children - and spoke to them. He reminded them that they had longago resolved to serve only God, not the Romans or any other master. Andhe called upon them to die as free men and women, rather than facecapture and slavery by the pagan conquerors.
His heartrending and moving speech persuaded the Zealots to commitsuicide before the expected dawn attack by the Romans. They burnedtheir belongings and weapons, leaving food so that the Romans wouldknow they had died of their own free will and had not perished ofhunger.
Lots were drawn and 10 men were chosen as executioners: the rest layside by side and bared their necks. At the end one Zealot killed theother nine - and then took his own life. It was the first day of Pessah- the holiday in which Jews celebrate their freedom from bondage. Twowomen and five children hiding in a cave lived to tell this tragic andheroic tale.
Take the path to a bridge, from which you will peer down into one ofHerod's huge reservoirs and view another mikve. To the right you willsee a wine cellar. During excavations in the 1990s, archeologistsuncovered part of an amphora used to import Italian wine. On the shardwas the inscription, in Latin, 'Herod, King of Judea.'
Soon you will reach the Keren Overlook, from which you can observe notonly the northern palace's three terraces, but also some openings inthe mountainside. They were cisterns, filled by surging floodwaters.Look for the donkey trail below them: someone up here probably loadedthe donkeys with jugs, slapped the beasts on the behind and sent themdown to the cisterns. There, the jugs would be filled, the behindsslapped again, and up they would come with water.
From here you can also distinguish several Roman camps - including thelarge one where Commander Flavius Silva was based. To its left you willsee a smaller camp and a hump. Twenty-five Zealot skeletons werediscovered in a cave at Masada: they were buried beneath this littlehill. 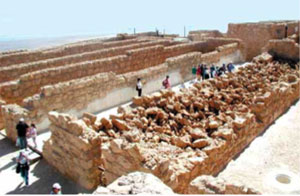 A layer of ancient cattle dung was found in the synagogue, your nextsite. Apparently used by Herod's Jewish family members for worship, itwas turned into a stable by Roman soldiers after the king's death. TheZealots purified the synagogue and made a number of structural changes.
Using stones taken from the palaces, they added several columns,combined the entrance with the prayer hall, and installed stonebenches. Fortunately for these extremely observant Jews, the house ofworship already faced Jerusalem.
If you are wondering where the Zealots lived during those electrifyingyears, you are about to find out. Make your way to the casement walls -the double walls with which Herod surrounded Masada. The Zealots'simple rooms lay between the outer and inner walls. Among the findingshere were nutshells, eggshells, and other homely residue.
Finally, you come to one of the most historic sites on Masada. Beneathyou and next to the mountain is the embankment that the Romans built inorder to wheel a battering ram up to the wall. And - yes - you arelooking at a battering ram! This one, however, was used in a20th-century cinematic epic called Masada, starring Peter O'Toole asFlavius Silva.
The earthen ramp was apparently erected by thousands of Jewish slaveswhom the Romans brought to Masada especially for this purpose. Thetroops were sure the Zealots would hesitate to shoot at their brethrenand, in fact, that is exactly what happened.
You are standing at the spot where the Romans breached the wall, beforethey finally entered the plateau stronghold. Note the pile of rocks,still waiting to be launched toward the Roman enemy!
On December 13, 2001, Masada National Park was declared a WorldHeritage Site by the United Nations Educational, Scientific andCultural Organization. It was chosen as a symbol both of Jewishcultural identity and, more universally, of the continuing humanstruggle between oppression and liberty.
Getting there:Masada National Park is located on Highway 90, about 17 kilometerssouth of Ein Gedi and directly across from the Dead Sea. Winter hours: Sunday-Thursday8 to 4; Friday 8 to 3; Sat 8 to 4. Closing hours given are for the lastcable car down the mountain. In the summer, add one hour. Most of thesite is wheelchair accessible: museum exhibits are at wheelchair eye level.There are accessible rest rooms. Two wheelchairs are available onrequest - inquire at the cashier. Phone: (08)658-4207/8 Bus 486from Jerusalem.