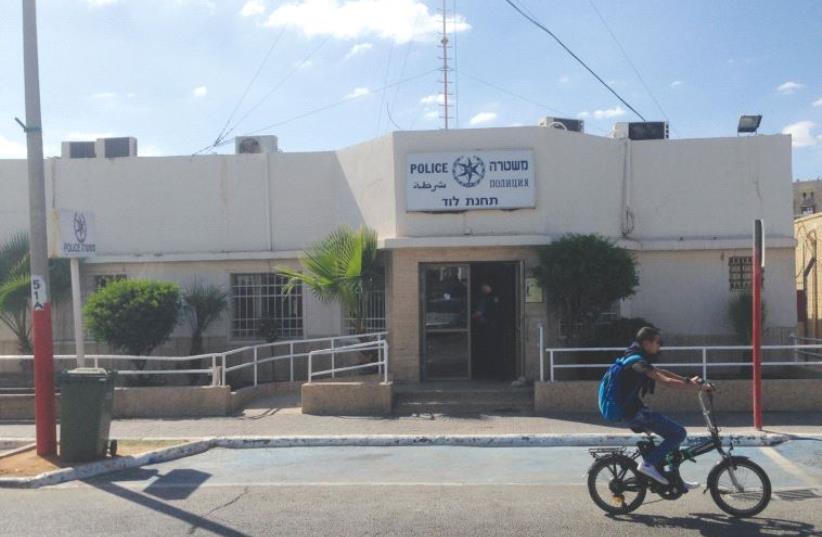 AN OFFICER stands in the doorway of the Israel Police station in Lod.
(photo credit: ELIYAHU KAMISHER)
Advertisement
Police have been unsuccessful reducing violence against Arab women, Knesset Committee for the Advancement of the Status of Women chairwoman Aida Touma-Sliman (Joint List) lamented at a meeting of the committee on Thursday.MKs learned that 40 Arab women were murdered in Ramle and Lod in the last 30 years, 15 of them since 2010.“We won’t continue counting the bodies,” Touma-Sliman said.Two sisters told the committee about their sister Duaa Abu Shrakh, who was murdered in front of her four children last month. Abu Shrakh had complained to the police about her husband’s violence, but did not get a response.“There’s no one to talk to,” the sister said. “We feel threatened, like the murderer killed all of us. I’m a strong woman, but I’m afraid that I’m being followed.”An Arab woman from Lod told the committee that she faces threats to her life, and that when her home was shot at, police did nothing.“Everyone knows my story, the police and the Welfare Ministry. The Welfare Ministry tells me to go to the police and vice-versa. Today I’m alive, but I don’t know when it’ll happen and I’ll be murdered. No one is doing anything,” she stated.She turned to police representatives looking for changes to prevent future murders and asked, “What are you waiting for?” Hadra Matuba, mother of Fatma, a 13-year-old girl murdered in a family dispute said, “No one helped me and no one cared when my house was burned down. I am afraid in my home. Every night when I go to bed I’m scared.”Joint List MKs blamed both the police and Arab society.MK Osama Sa’adi (Joint List) called Abu Shrakh’s sister’s testimony a “serious indictment” against the police, but added, “We are critical of ourselves on the matter of violence in general, and specifically violence against women.”“There is a societal ill of men who think they can easily take the life of a woman because they think she is worth less than they are.That is primitive and inferior thinking,” MK Ahmad Tibi (Joint List) said.Tibi said that the police cannot deter criminals because they don’t solve enough of the murders.“In most cases, the police knows who the murderer is, but he remains free because of a lack of evidence,” he stated.MK Haneen Zoabi (Joint List) posited that the police are not unable to solve murders, but are unwilling to do so.“The police chases after Facebook statuses and political activists and not against men who murder,” she said.Kulanu MK Rachel Azaria said, as a member of the Jerusalem City Council, she led a battle to make the police take violence against women more seriously.“The police’s idea that every community can manage itself is mistaken. Arab women want to live, just like Jewish women do, and everyone wants a good life without fear and threats,” she stated.Police Cmdr. “Dado” Zamir said that murders “keep us up at night,” and that the police does not skimp on manpower to solve them.“There are many women who were saved because of the police and Welfare Ministry, whether it is care in the community or sending them abroad. We don’t leave a stone unturned and all evidence is checked. There’s a big gap between things we know and tangible evidence that the prosecution can use,” he said.Zamir said 50 cases of family violence were opened in Lod last year, leading to 40 indictments.Orly Dahan of the Lod Municipality said authorities know of 80 women in the city who face threats of violence, 20 Jewish and 60 Arab.But she added, with only two municipal social workers, the city needs more funds to deal with the problem.Touma-Sliman closed the meeting by asking police to say how they are taking care of the women who testified to the MKs, report the number of cases opened following complaints about domestic violence, and give a status update.Touma-Sliman also called for the police to develop a plan to reduce violence against Arab women, specifically in Ramle and Lod.“I hope we see Duaa’s murderer behind bars soon,” she added.