"Many stigmas still accompany us and Russian speakers are not adequately represented in most sectors of the Israeli economy." 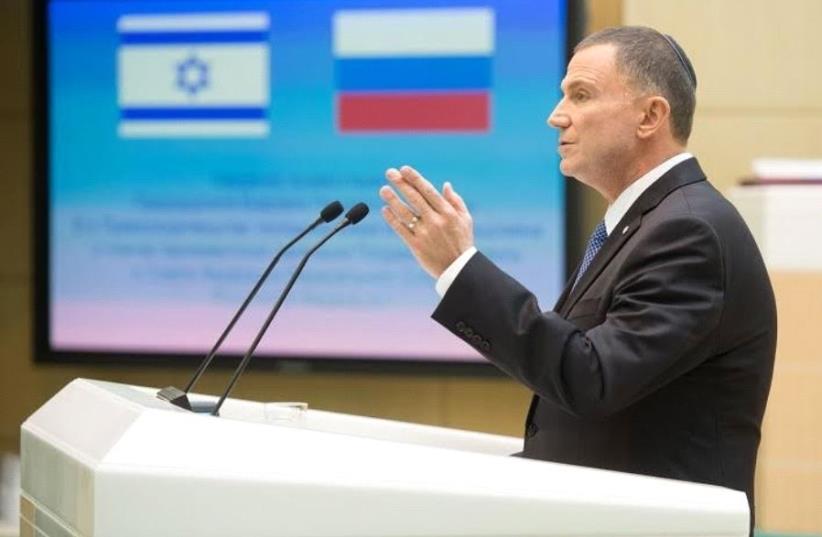 Knesset Speaker Yuli Edelstein addresses Russian parliament in Moscow, June 28, 2017
(photo credit: COURTESY KNESSET SPEAKER'S OFFICE)
Advertisement
As Israel nears a fourth round of elections, 71% of Russian-speaking Israelis feel that they do not have adequate representation in the government, according to a new poll published by the Israeli Congress and the Million Lobby on Sunday.
The poll also found that 80% of Russian-speaking Israelis feel inadequate representation in the judiciary, 72% in the media and 37% feel inadequate representation in the education system.
Some 77% of Israelis believe that Russian-speakers have not integrated enough into Israeli society, according to the poll. Over a quarter of Israelis responded to the poll that Russian-speakers do not invest effort in integrating into society, 16% of Russian-speakers said they agreed with this statement and 37% blame Israeli society for not accepting them.
Some 40% of Israelis responded that cultural gaps make it difficult sometimes to connect with Russian-speaking Israelis, but 85% said that they're interested in getting to know Russian-speakers, their customs and opinions better. Some 65% of Israelis stated that they believe the contribution of Russian-speakers to the country is not appreciated enough.
Some 34% of Israelis said that they believed a significant proportion of Russian-speakers are not Jews according to the halacha (Jewish religious law), with about a quarter of Russian-speakers agreeing. About half of Israelis and half of Russian-speakers stated that Russian-speakers give their children a rigid education.
"Israeli society is made up of many sectors, groups and committees. This complexity is one of the things that makes us Israelis, but also one of the sources of various gaps and social challenges," said Dr. Gilad Weiner, director-general of the Israeli Congress. "In the run-up to the next election campaign, we turned the spotlight on a group that was once one of the most circulated by Knesset candidates and is referred to by a number of names in Israel, sometimes called 'Russian-speaking Israelis,' sometimes 'former Soviet Unioners,' or even 'Russians,'" he said.
"In this poll we sought to understand what their needs are, their pains and desires. The various candidates for the Knesset must also understand this by referring to each group and sector that makes up Israeli society," Weiner said.
"IT IS EXCITING to see that today, most of the State of Israel recognizes and appreciates the contribution of the Russian-speaking aliyah [immigration] to the country," said Alex Riff, director-general of the Million Lobby. "However, even though 30 years have passed, many stigmas still accompany us, and Russian speakers are not adequately represented in most sectors of the Israeli economy. "It seems that there are more gaps between Russian-speakers and the general population, so we actually set up the Million Lobby to fight for us to be equal citizens in Israel – and hopefully this picture will change in the coming years," he said.
The poll was conducted digitally in December among 1,013 respondents from across Israeli society. On Sunday evening, the Israeli Congress will hold an online meeting with Riff and Prof. Larissa Remnik of Bar-Ilan University, two key voices regarding Russian-speakers in Israel and the Israeli government and Israeli society's attitude toward them. The poll results will also be presented during the meeting.
The poll released on Sunday marks a one percent increase compared to a poll released in December by the Israeli Congress, which found that 79% of Russian-speaking Israelis did not feel that they have adequate representation in the judiciary, 71% felt that way about the media, and 70% about government. But regarding education, some 42% felt underrepresented in the education system in the earlier poll, as opposed to only 37% in the new one.
Over a third of Israelis also think that there is a high percentage of alcoholics among Russian speakers and that the Russian-speaking public is arrogant, according to the December poll.
The Israeli Congress, a joint initiative of Bar Ilan University and the Menomadin Foundation made up of members of all parts of Israeli society, works to address the tension between the State of Israel's Jewish and democratic identities.
Jerusalem Post Staff contributed to this report.