“There will be no violence. No one will raise a hand against a police officer or soldier.” 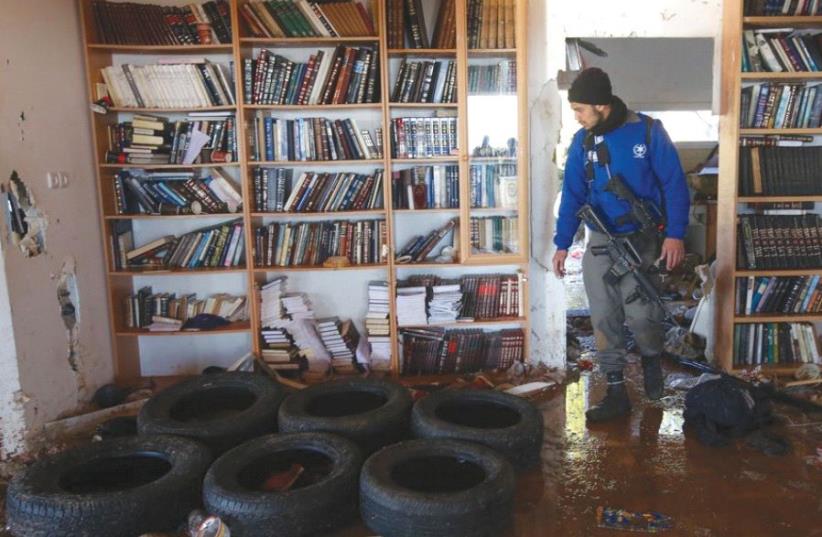 A SECURITY OFFICER surveys the inside of a synagogue in Amona yesterday after the youths who barricaded themselves inside were removed.
(photo credit: MARC ISRAEL SELLEM/THE JERUSALEM POST)
Advertisement
Almost exactly 11 years ago, thousands of Israeli security personnel clashed with settlers and their supporters as they came to demolish nine homes built in the illegal outpost of Amona in the West Bank.Tensions and deep divisions were still lingering in Amona from Israel’s unilateral withdrawal from the Gaza Strip in 2005, when the IDF carried out a mass evacuation of a Jewish settlements, clashing with settlers as they forcibly removed some 8,600 residents from 17 Israeli settlements in the Strip.Activists had prepared for violence, putting barbed wire, large stones and tires on the rooftops. When police came on horseback and in riot gear to demolish the homes in Amona, the ensuing clashes left more than 220 people injured, half of them civilians. One Border Police officer suffered a serious head injury and had to be evacuated to a Jerusalem hospital by helicopter.Violence during the evacuation of Amona this time around was also expected, but unlike 2006 the tensions surrounding the two events were different.This evacuation was more of a nonviolent demonstration and according to Israel Radio, Amona spokesman Avichai Boaron had told a group of young West Bank activists in December that the evacuation would not descend into the violence seen in 2006.“There will be no violence. No one will raise a hand against a police officer or soldier,” he said, emphasizing that “the resistance has to be passive – that is the only way we can express our opposition.”Early Wednesday morning, before unarmed policemen began their climb up the stony hill on which Amona stands, a group of a dozen young activists burned tires, spilled oil on the street and threw stones toward a group of officers.Inside the outpost, young activists had set up dozens of barricades along the roads, and warned journalists not to take pictures of them.An Amona supporter who refused to give his name told The Jerusalem Post that “there are a few bad guys here who wouldn’t be afraid to hurt officers.”The evacuation on Wednesday saw the majority of activists showing passive resistance to the police, but there were some heavy but scattered clashes between police and activists who threw bricks, stones and chemical materials.Emotions ran high as protesters and evacuees yelled at officers that they should be ashamed of what they were doing and pleaded with them to refuse orders.“It’s very hard for them to hear the curses and allegations and see the pain of the settlers. We are making a difference between settlers who live here who need to leave their homes and anarchists who don’t live here but who come to provoke,” police spokeswoman Cmdr.Meirav Lapidot told the Post Wednesday night in Amona.There is a “trade-off between being fast and efficient. We prefer being efficient and useful while still being full of compassion,” Lapidot said, stressing that the security officers “understand that it is a very difficult situation.” During the evacuation, many police officers were seen talking with Amona activists who pleaded with them to be allowed to stay.On Thursday morning, after the majority of residents and supporters were gone, protesters made their last stand, barricading themselves inside the outpost’s synagogue. After hours of fruitless negotiations, police wearing eye protection, helmets and carrying shields readied themselves for what would be the most violent part of the evacuation.Entering the synagogue without any heavy protection, police were attacked with tear gas, pepper spray, iron bars, rocks and paint. These clashes alone left 24 officers injured.Inside the synagogue, graffiti comparing Israeli police to Nazis was found defacing the walls of the synagogue and “Death to Zionists” was found on the walls inside.By Thursday evening, the evacuation was deemed over by the police. Despite leaving 60 security forces and over a dozen civilians injured, the violence that marred the 2006 evacuation did not reach the same heights this time around.